The Myth of American Exceptionalism American Exceptionalism holds that the USA is fundamentally different from other countries, usually with the implication that it is also superior. The idea stems from the belief that through its revolution, America broke free from the chains and constraints of the “Old World.”  It had embarked on a new path. It had a duty, a mission, to spread the benefits of its institutions to the rest of humanity, benefits like individual freedom, republicanism, democracy, equality before the law, a free market economy, and religious freedom.

None of these institutions or ideas originated in the United States. All can be traced to earlier history, from the Greco-Roman world and European history from the Middle Ages to the 18th century Enlightenment. The Patriots appealed to “Anglo-Saxon Liberty,” Magna Carta (1215), the English Revolutions and British philosophy, to justify claims to individual freedom and legal equality. In the Declaration of Independence, Jefferson drew heavily on the ideas of John Locke.

American’s Founding Fathers admired and were influenced by the Roman Republic. The Netherlands, Venice, Genoa, and the Swiss Confederation were or had been republics for hundreds of years by 1776. Even Britain had been as well, though for only eleven years (1649-1660).

Ancient Athens was famously a democracy of sorts, but the makers of the Constitution were not enthusiastic about that system, which is why Presidents are elected by the Electoral College, not the voters.* Their distrust of democracy also partly explains why the Senate is a thoroughly undemocratic body. The USA embraced democracy as an ideal well after its foundation, slowly and reluctantly, kicking screaming. The process entailed Civil War, suppression of Manhood and then Women's Suffrage, denial of Civil Rights on the basis of race.

As for free market economics, Scottish philosopher Adam Smith published the founding text in 1776, The Wealth of Nations. His concern, however, was with the good of consumers (everybody) not employers and traders, who he viewed as a conniving, dishonest lot. He was far more sympathetic to workers, who he recognized as being in a weak position. Not surprisingly, American capitalists seldom go into detail on that part of Smith’s work, or indeed his condemnation of monopolies and government subsidies.

The idea of religious freedom in Western countries arose out of the Wars of Religion that followed the Protestant Reformation. The Dutch introduced religious toleration in the late 16th century, the British by the late 17th. Most Enlightenment thinkers advocated complete religious freedom.

The view that the USA is morally superior to other nations is belied by its history of slavery and segregation, horrific treatment of Native Americans, and discrimination against immigrants of “inferior races," including the Irish, Asians, Jews, Southern and Eastern Europeans, and Hispanics.

Nowadays, the US is all too exceptional in its insistence on other countries obeying international laws and moral standards while failing to observe them itself. 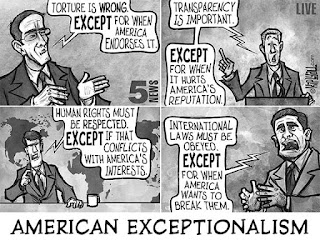 The US national anthem ends with “The Land of the Free and the Home of the Brave!” Those words of Francis Scott Key have been hard-wired into American brains, including my own. If the words are true, one must feel sorry for the rest of the world, those sad lands of slaves and cowards. 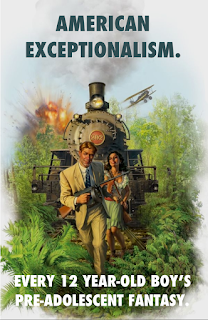 *Some Southern slaveholders argued that white democracy was possible, but only with a large population of slaves to do the physical work, freeing the white elite to handle governance.

Posted by peter mccandless at 17:20