London's Wapping District: A Great Place to Hang in London

Wapping is not one of London's districts crammed with tourists, and that is one of the best things about it. One can stroll about unimpeded by the gawking crowds at the nearby Tower of London and have the gawking to oneself. But there are other good things as well. Wapping was once a bustling port area dominated by wharves and warehouses and trades catering to the seafaring world: chandlers, inns, pubs, dosshouses, and doxies.

Wapping was heavily bombed in World War II and the docks, unable to handle the large ships of the late 20th century, closed in the 1960's. The area was largely derelict until major redevelopment began in the 1980's. Wapping is now a rather fashionable place, especially near the waterfront, what with the marina, restaurants, and shops of St Katherine's Docks nearby, and its proximity to the financial districts of the City and Canary Wharf.

The low taverns and brothels may be gone along with the ships and sailors, but the layout of the streets, the warehouses, and a few pubs retain some of the feel of those days. Many of the warehouses have been converted into apartments. The cranes that once hauled goods from ships often remain on the buildings, reminding one of their former purpose. Old stairs lead down to the river at various points along the waterfront. They were used by watermen who ferried people across the river or to ships, and were known as "watermen's stairs."

The waterside is also home to several inviting pubs with good views of the river. Two of them The Prospect of Whitby and The Town of Ramsgate, claim to be the oldest pubs on the river. 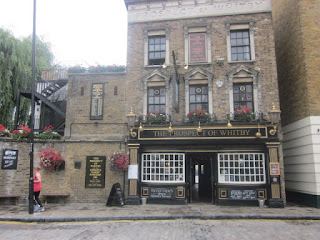 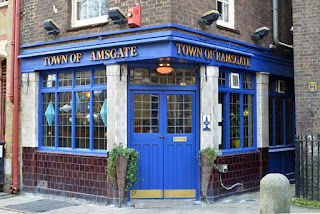 The Prospect of Whitby boasts the longest pewter bar in Europe and an upstairs room named for Samuel Pepys, the famous 17th century diarist, who used to frequent the place. Another pub, The Captain Kidd, is named for the famous alleged pirate who was hanged nearby at Execution Dock in 1701. 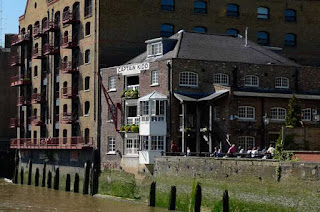 The Prospect and the Captain Kidd both feature hanging ropes outside, to get you in the right mood for celebration. 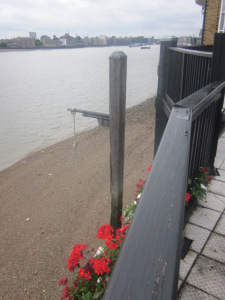 Posted by peter mccandless at 12:55 No comments:

This Church is a Film Star: London's St. Bartholomew's

The Church of St Bartholomew the Great in the City of London is probably familiar to you.  Even if you have never been there in person, you almost surely have seen it on the big or little screen. It has been used in many popular films and TV shows, including Four Weddings and a Funeral, Shakespeare in Love, Amazing Grace, The Other Boleyn Girl, Richard II, and Robin Hood: Prince of Thieves.
The church's stardom helps explain why it was the first parish church in England to charge tourists an entrance fee.  For a parish church it is quite large, which may explain its attraction to film-makers. Being in the heart of London doesn't hurt either. 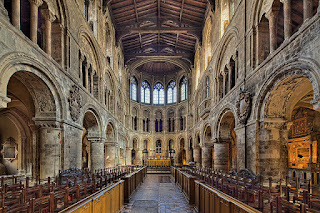 The church, which stands just to the south of the famous meat market of Smithfield, dates from 1123, when a man of some wealth named Rahere, founded the Priory of St. Bartholomew, with an attached hospital. Rahere had recovered miraculously from a fever while on a pilgrimage to Rome, and in a dream the saint instructed him to set up a monastic foundation, or so said Rahere.

The hospital, the oldest in London, is next door inside a high wall. The wall contains a memorial to William Wallace, Braveheart, who was executed for treason nearby, one of many people who met that fate here, including the heretics/martyrs burned under Bloody Mary.

A statue of Henry VIII, father of Bloody Mary and Elizabeth I, stands over the entrance gate to the hospital, legs splayed, looking very kingly indeed. The statue was his reward for dissolving the monastic foundations and giving the hospital to the City. 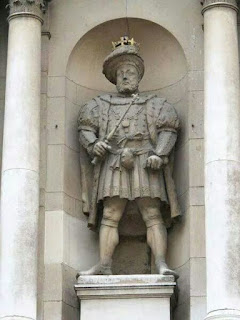 Since Henry’s time the hospital has been a secular establishment, known affectionately as “Bart’s.”  Another interesting and just as old church sits inside the hospital walls known as St. Bartholomew the Less. The “Less” is not a put-down, but was coined to distinguish it from its larger namesake nearby. Both are part of the same parish of the Church of England today. 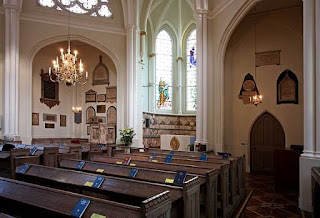 How convenient. In one little place, you might be cured of illness (not likely), executed (more likely), and given the necessary rites to speed your way to heaven (unlikely).

Just to the south of Bart's Hospital lies the former site of London’s notorious Newgate Prison, now replaced by the Central Criminal Court. But that is another story.
Posted by peter mccandless at 16:21 No comments:

Don't get too excited. Cock Lane was named for the male chicken. But it is a place of considerable interest. It was here that the Great Fire of London of September 1666 was finally stopped, or got tired. 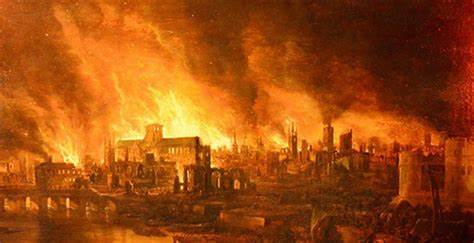 On the eastern end of Cock Lane, at its intersection with Giltspur Street,  the Fortune of War pub once stood. It later became a notorious hangout for body snatchers or resurrection men who supplied fresh corpses to London's anatomists, but that's another story.

After the fire was snuffed out, some civic-minded folk put up a warning on the wall of the pub. They attached a golden cupid-like statue called the Golden Boy of Pye Corner.
The inscription below the statue read: "This Boy is in Memmory [sic] Put up for the late FIRE OF LONDON Ocassion'd by the Sin of Gluttony." I doubt many of London's poor agreed with that assessment.
The pub is no longer there, but the statue and inscription are. You have to look up to see it, because it is placed about fifteen feet above the ground. 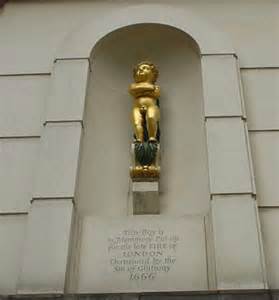 At the other end of Cock Lane, a short distance away, is the locale of another fascinating story, that of the Cock Lane Ghost. The ghost allegedly haunted a house here in the 1760's, a century after the Great Fire.
Dr. Samuel Johnson of dictionary fame, exposed the ghost as a fake, alas, but it caused quite a stir and a scandal. The story is too long to relate here, but you can learn about it in a book by Paul Chambers, Cock Lane Ghost: Murder, Sex, and Haunting in Dr. Johnson's London.

If you turn left at this end of Cock Lane, you will quickly arrive at Newgate Street, named for the infamous Newgate Prison which stood nearby. You will pass St. Sepulchre Without Newgate, the largest parish church in the City. 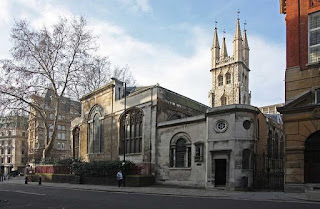 St Sepulchre's bells are the "Bells of Old Bailey," in the famous rhyme "Oranges and Lemons." A special bell was rung on the days when executions took place at the prison, which was pretty often until the late nineteenth century. The execution bell is displayed within the church, which ironically has been the official musicians' church of London for many years. 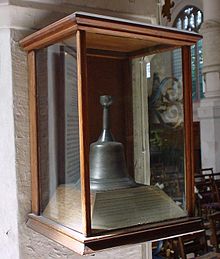 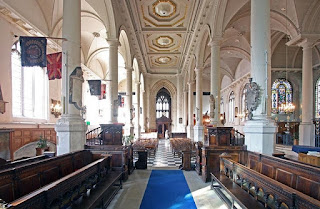 Posted by peter mccandless at 23:24 No comments: