How the Gardenia Got its Name 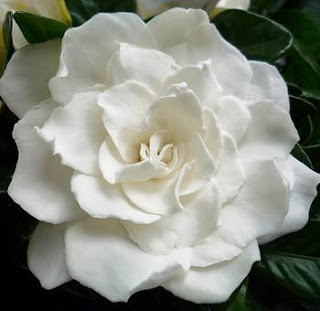 The gardenia is a familiar, fragrant flowering plant with whitish flowers. Obviously, it derived its Latin name from the word “garden,” but it was not named for a place full of plants, but a physician and naturalist who lived in Charleston, South Carolina during the eighteenth century.

Alexander Garden was born in Birse, Aberdeenshire, Scotland in 1730. He studied at Aberdeen and Edinburgh Universities, receiving an MD from the latter school. He served as a surgeon in the British navy for several years, but resigned, he said, because he could not overcome sea sickness. A lung complaint, probably tuberculosis, may also have played a part in his decision.

He emigrated to South Carolina in 1752 in hopes of improving his health and income. In the latter goal, at least, he succeeded. South Carolina was not only the wealthiest British North American colony, it was also the unhealthiest. Garden married a wealthy local heiress, Elizabeth Peronneau, and soon had a flourishing practice in the provincial capital, Charlestown). (Image: Charlestown harbor, 1760s) 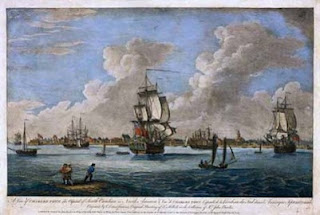 By the time of the American Revolution Garden had become the richest physician in the colony, and had bought a plantation in nearby Goose Creek, which he named Otranto.

His passion, however was natural history, initially botany, but later zoology. In South Carolina, Garden collected specimens of many new species and sent them to European naturalists, especially John Ellis of London. As a reward, Ellis urged the Swedish naturalist Carolus Linnaeus to name a new genus or species after Garden.

Linnaeus had invented the modern system of biological classification, and currently had the final say on naming. Garden and Linnaeus also opened a correspondence that lasted for several years. (Image: Linnaeus) 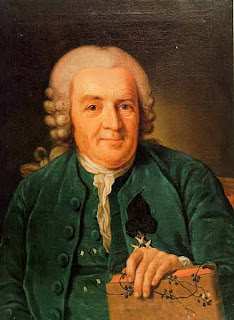 In 1757, Ellis failed to convince Linnaeus to name a South Carolina plant after Garden, the Calycanthus floridus (Sweet Shrub, below). 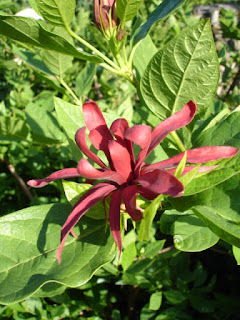 The next year, Ellis first set eyes on an attractive, fragrant plant that a ship had recently brought from South Africa. He soon began a campaign to get Linnaeus to name it after Garden. Linnaeus initially refused, saying he preferred to give the name to a plant discovered by Garden himself, or another species. In 1760, Linnaeus reluctantly agreed to the name gardenia, giving Garden what Ellis called a “Species of Eternity.”

The honor impressed many of Garden’s acquaintances in Charlestown, but one medical colleague was apparently jealous. Dr. Louis Mottet is alleged to have scoffed that he had discovered a very beautiful local plant, and named it “Lucia” after his cook, Lucy.

In the following years, Garden continued to make contributions to natural history, including the discovery of new species of amphibians and fish. (Image: Siren lacertina) 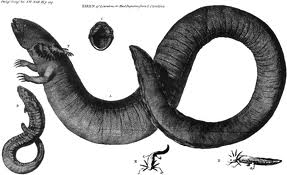 In 1773, Garden was elected to membership of the Royal Society of London, Britain’s most prestigious scientific organization. Among those who nominated him were Ellis and Benjamin Franklin. During these years Garden became a close friend of many leading figures of South Carolina, among them Henry Laurens, later president of the Continental Congress. Garden mentored and adored Laurens’ son John Laurens, who served as a a Patriot officer during the American Revolution, and was killed in one of its last engagements (Aug. 1782).

The War for Independence proved disastrous for Garden. He tried, unsuccessfully, to remain neutral. His family divided. During the British occupation of Charleston (1780-82), his daughter Harriette married a British officer. His son Alex joined the Continental Army, rising to the rank of major. 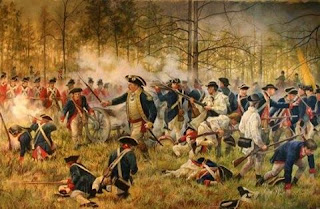 When the British evacuated Charleston in December 1782, Garden, his wife, and younger daughter Juliette went into exile in London. He died there in 1791, most likely of tuberculosis. During his time in London, he was an active member of the Royal Society, and was elected vice-president.

James Edward Smith, A Selection of the Correspondence of Linnaeus and Other Naturalists (2 vols., London, 1821)
Posted by peter mccandless at 22:32 1 comment:

The day after I had taken the Golden Circle Tour, I took a whale sightseeing boat, didn't see any whales, but saw lots of colorful puffins. Later I met up with friends who had arrived from the US. We spent the day, which happened to be the longest of the year, exploring Reykjavik and enjoying lots of seafood.  Around midnight, we toasted the solstice at a local bar, the intriguingly named Uncle Tom's Cabin.

The following day we rented a car and drove about 30 miles east to a rural farmhouse, where we would be staying for the next couple of days. The house backed up on a field full of Icelandic ponies -- I mean horses, some of whom came close enough to say hello. 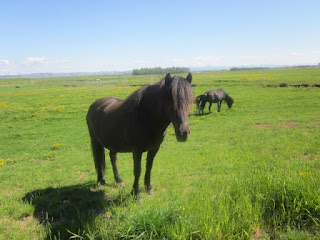 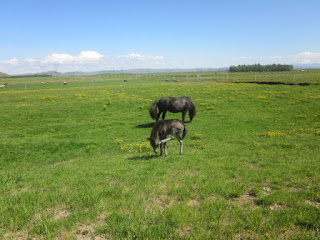 That evening we discussed plans to explore Iceland's south coast. We stayed up talking until about 2 am, losing track of time. After a late and leisurely breakfast, we set out around mid-day. The late start hardly mattered, because we didn't have to worry about running out of daylight. And the day was sunny and pleasantly warm.

Our first stop was a waterfall, Seljalandsfoss, one of many that grace this region. 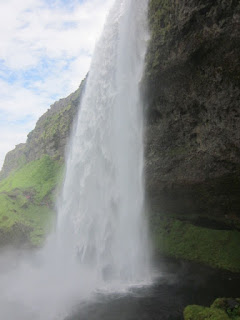 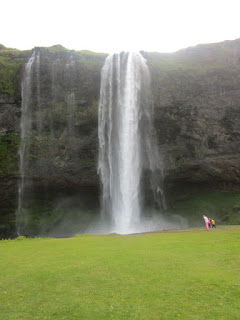 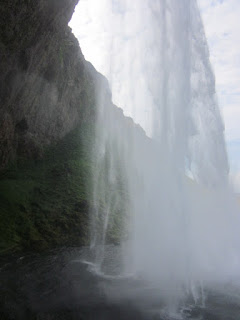 We glimpsed other waterfalls from a distance as we drove along the coast. 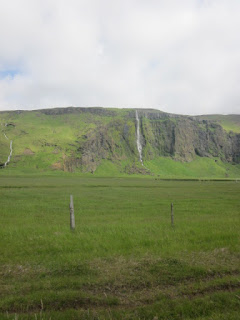 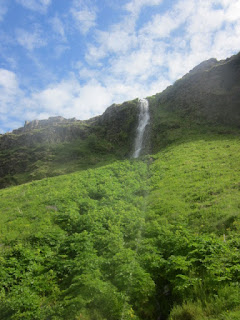 Before long we arrived at a valley that had been devastated by the eruption of a volcano, Eyjafjallajokull, which began in late March 2010. The name means "island mountain glacier." The eruption began under the ice sheet of the glacier, and produced a huge volume of volcanic ash, which disrupted transatlantic flights for days. It also produced massive flooding in the valley, destroying farm buildings and houses. We stopped at a museum shop belonging to one of the local families, who had suffered major losses. We viewed a film about the eruption, and bought t-shirts that said "What about Eyjafjallajokull don't you understand?" The photo below shows the valley and the snowcapped peak of the volcano. 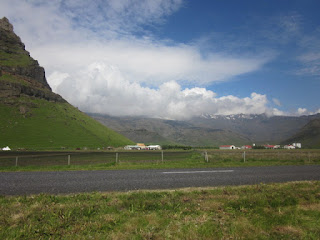 Back in the car, we drove on to our next destination, Skogafoss, another spectacular waterfall. 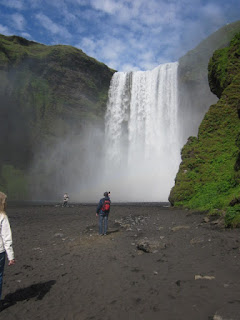 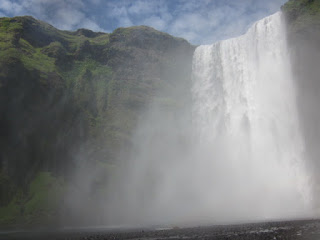 We walked up a path from the base to get a view of the falls from the top. 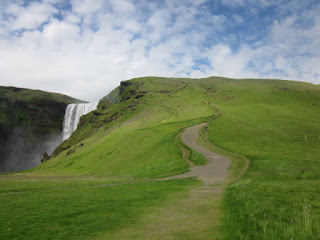 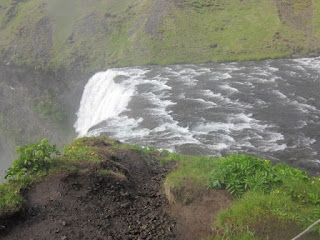 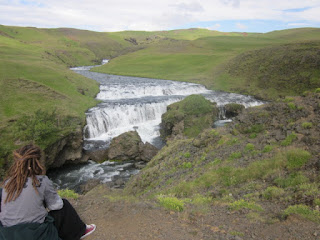 Nearby, we visited a restored village, where one can get a glimpse of life here in the late 19th century or so. The houses and most buildings have grass roofs. 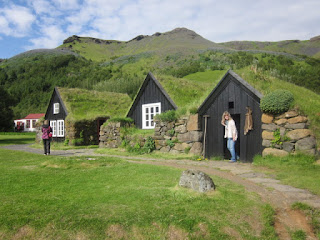 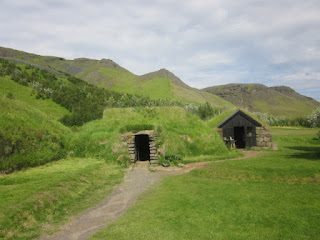 Our next stop took us down a small road to the edge of the glacier under which Eyjafjallajokull lies. From the car park, we walked a short distance to the glacier's foot. The ice was almost black, mixed as it was with volcanic ash. 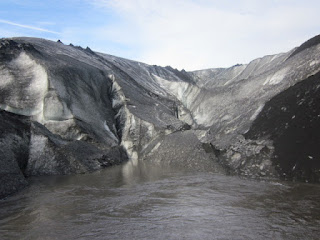 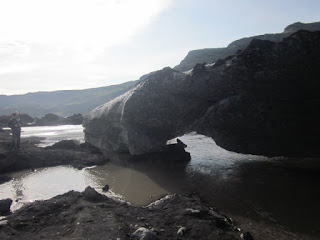 From the glacier, we road on eastwards to the little town of Vik, which boasts a black beach, made of volcanic sand. From there, one can view some stacks offshore. 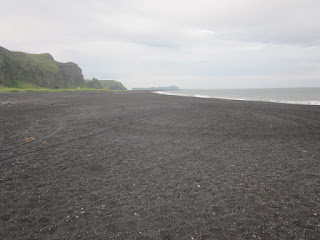 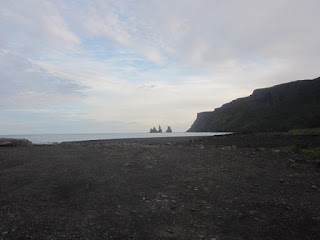 We had a bite to eat in a beachside cafe, and began our trip back to the farmhouse.On our return, we caught a great view of the volcano on the glacier. 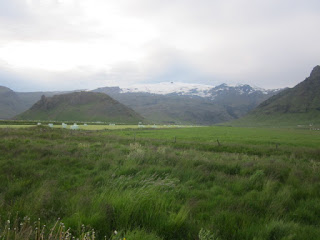