According to medical historians, bubonic plague has reached pandemic (global or near global) level on three occasions. The first, often called the Plague of Justinian, occurred during the 6th and 7th centuries. The second began in the 14th century (The Black Death). It lasted until the 18th century in Europe and a bit longer in some eastern and middle eastern locations.

The Third Plague Pandemic killed about 15 million people, the great majority in the Indian subcontinent. It began in Western China in the mid-1850s during the Taiping Rebellion, and gradually spread west to Russia, reaching the Ural and Caspian regions by the 1870s and 1880s. It also moved east, reaching southern China and Hong Kong by 1894.

Modern technology played a role in its spread. Fast steamships  took it across the wide Pacific. It reached Hawaii in 1899 and San Francisco in 1900. Railways also helped to spread the disease widely, especially in India. 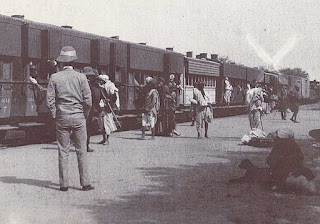 Plague had minimal effect in Western Europe on this occasion but an outbreak did occur in Glasgow, Scotland in 1900, with 35 infected, of whom about half died.

By this time, medical scientists had embraced germ theory, and one of the results of the new pandemic was the discovery of the microbe responsible: yersinia pestis, named for Alexander Yersin, the Russian physician who isolated it. Yersin's vaccine was prepared from heat killed plague bacteria. (Images: the bacteria and Yersin.) 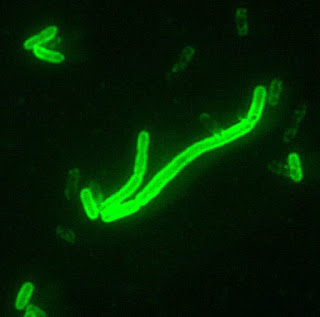 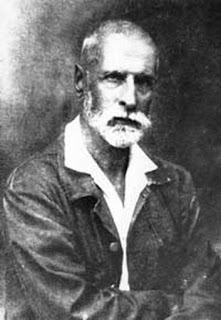 By the beginning of the 20th century many investigators also concluded that plague was spread by fleas from rats. From 1900 huge efforts were made to eliminate the rodents, as in Sydney, Australia (below). 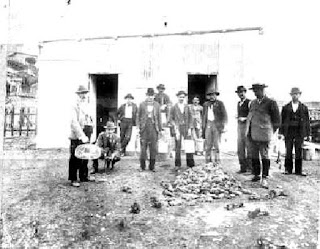 The rat-flea-human cycle had competition, however. Many people  argued that plague could be spread by humans and contaminated materials (fomites), which led to the quarantining of victims, mass burials, the destruction of clothing, furniture, and other property.

These measures caused great resentment and unrest, especially in colonial possessions like Hong Kong, India, and Hawaii, where insensitive white authorities often ran roughshod over indigenous beliefs and customs and treated local people with racialistic disrespect. In Hong Kong, British officials sent gangs of soldiers to "disinfect" Chinese houses. This involved not only spraying them with strong disinfectants, but removing furniture, bedding, and other household items to be burned. 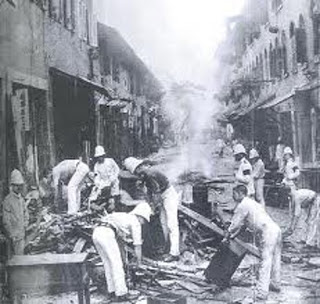 The Chinese inhabitants saw the quarantines, searches and disinfecting as unnecessary, insulting, and intrusive. Many of them distrusted western medicine. Chinese who were found to be infected were removed to an airless hospital ship and later to a makeshift substandard hospital converted from an old factory.

The Chinese reaction is understandable. About 90% of the infected Chinese died, versus about 66% of Europeans. The official death toll in Hong Kong was 2500, but was undoubtedly much higher, because many deaths were conealed from the authorities. The death toll in in nearby Canton, where many Hong Kong Chinese fled, was much higher.

American officials in Hawaii used similar measures in trying to combat the spread of plague among the Chinese community, and aroused similar hostility. The same was true in San Francisco and in British India. The images below were taken at quarantine camps in Karachi (now in Pakistan). 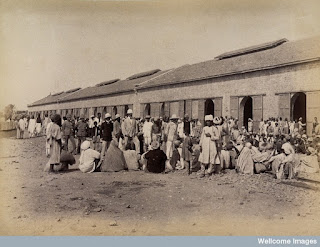 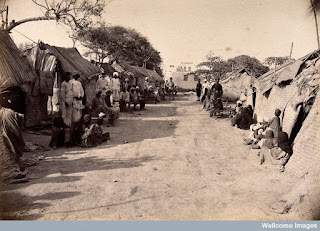 India suffered more from the plague than any other country or region. Plague killed as many as 12 million Indians between the 1890s and 1920s, 3 million in 1903 alone. In comparison plague killed about 7000 in Europe and about 500 in the US, mostly in San Francisco in the early 1900s. Another outbreak took place in Los Angeles in 1924-25.

A plague vaccine developed by a Russian bacteriologist, Waldemar Haffkine, was employed in India, but it was only partially effective. In any case only 4 million Indians had received the vaccine by 1900, when the population of British India was 230 million.

In 1910, another plague epidemic broke out in eastern Siberia and spread into Manchuria in northern China. It was traced to hunters who had been trapping marmots. The disease initially spread from infected marmots to humans via their fleas. 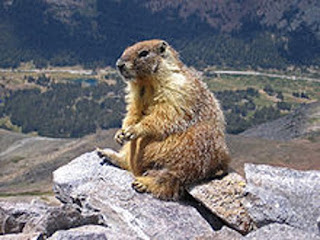 The discovery of that link led to the realization that other rodents besides rats could spread plague via fleas, and that rats might not be the main vector. Today in the Western US, the fleas of prairie dogs and other burrowing rodents are capable of spreading the disease, and humans are ocasionally infected in this way. The disease spread in these animals after plague arrived in San Francisco in 1900.

It was soon learned that human fleas can spread plague as well, and that humans can also spread it through coughing when it takes the pneumonic form and invades the lungs. The pnuemonic form is much less common than the bubonic (lymphatic) form, but it was present in the Manchurian outbreak. The image below shows some of the victims. 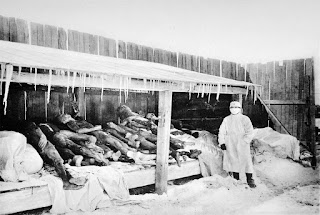 Wu Liande, the Chinese doctor who directed anti-plague efforts in Manchuria in 1910-11 and again in 1920-21, had been trained in Western medicine at Cambridge University. 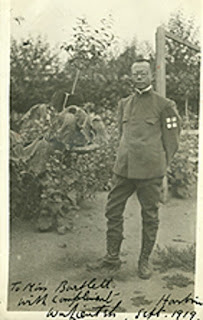 Wu used many of the same measures as European and American imperialists, but met less resistance because he was Chinese and understood local customs. He also introduced the use of gauze masks and other garb to prevent the spread of pneumonic plague. The photo below shows a patient (see arm) being vaccinated with the Haffkine vaccine. Wu's measures soon brought plague under control in northern China. 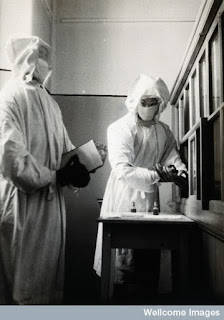 None of the measures used to combat plague, however, were completely successful before the discovery of the first antibiotics in the 1940s. DDT, which began to be employed around this time, also helped by killing fleas but had harmful effects on the environment. Organisms could also adapt to the DDT. Some strains of the bacteria have already demonstrated resistance to antibiotics.

Plague has disappeared from much of the world since the 1950s, but major outbreaks still occur, mainly in impoverished areas. In August 2017 1800 people were infected with plague in Madagascar, 1100 of them with the pneumonic form. On average about 1000-2000 cases of plague are reported globally each year.

Could plague return again in pandemic form? Under the right circumstances, it could. Best advice: avoid burrowing rodents.

Posted by peter mccandless at 18:55 2 comments:

The London neighborhood of Clerkenwell, a short walk to the north of the intersection of Ludgate Hill and Fleet Street, derives its name from the Old English for “clerks’ well” -- clerks in this case meaning clerics/clergy. Medieval monks and nuns from several nearby religious houses drew their water from a well here, along the banks of the now subterranean River Fleet, which runs under Farringdon Street and Road.

The River Fleet gave its name to Fleet Street and the notorious Fleet Prison for debtors. The prison is long gone, replaced by high rise offices. Hard to say which is worse. 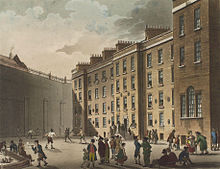 To the west of Farringdon St./Rd, just past Holborn Viaduct runs a narrow lane and area called Saffron Hill. It didn’t get its name from upscale developers. Saffron was once grown here. By the early nineteenth century it had become a derelict area inhabited by the very poor and criminals. Many shops along the street and just off it fenced stolen goods.
Charles Dickens placed Fagin’s thieves' den in Oliver Twist here, just off Saffron Hill on Field Lane. Alas, or maybe not, there are few reminders of those days left. Saffron Hill ends at Clerkenwell Rd and becomes Herbal Hill, a street descending the other side of the gentle incline. 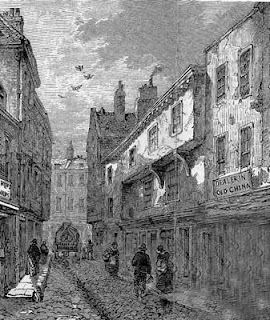 Near here one can see the well that gave Clerkenwell its name. It's on Farringdon Lane, just east of Farringdon Road. The well is inside a modern office building with a sign on the wall: Clerks’ Well.  You can see it through a plate glass window, much like Christmas displays at Harrods. Visits can be arranged. Maybe you can be drowned in this holy well. 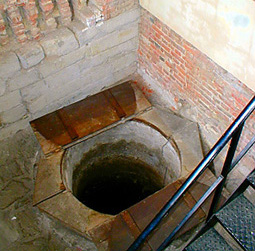 The well is just off Clerkenwell Green, which hasn't been green for three hundred years or so.

Clerkenwell Green is where the Artful Dodger and Charley Bates take Oliver Twist to introduce him to their trade: pick-pocketing. The episode leads to Oliver’s arrest and appearance in court before the snarling magistrate Mr. Fang and his temporary rescue from Fagin by the kindly Mr. Brownlow. (Illustration from Oliver Twist by George Cruikshank) 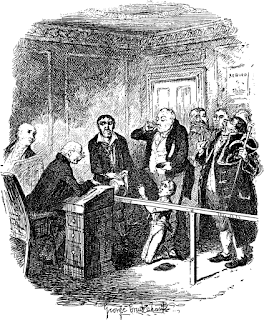 The courthouse itself is at one corner of the Green. The Old Middlesex Sessions House, is an impressive building. It's a neoclassical structure, opened in 1780. It once had the reputation of being the most severe London court in its sentencing of convicted criminals. Today it's a Masonic Lodge and a tour of the attractive interior, if open, is well worth the time. Its dome is a replica of the Pantheon in Rome. The purpose of the court's elaborate decoration was no doubt to convince those who entered of the sacred majesty of the law. 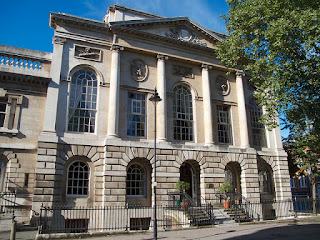 Across the Green sits a memorial to someone who denounced that majesty as a tool of the ruling class. The Marx Memorial Library houses a large collection of literature relating to the history of Marxism, socialism, and the British trade union movement. Its building, dating from 1738, once housed the Welsh Charity School. 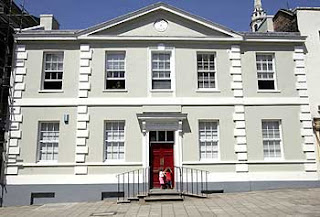 If you are  thirsty, and I'm sure you are by now, there are several nice pubs nearby. One, the Betsey Trotwood is named for David Copperfield's crusty but goodhearted aunt. It lies just to the north of Clerkenwell Green where Farringdon Lane runs into Farringdon Rd.

A couple blocks north of the pub, at the intersection of Roseberry Ave, is a large white post office depot with the words “Mount Pleasant” emblazoned across its front. The name has a certain irony. It was once the location of one of London's most feared prisons, the Cold Bath Fields House of Correction, opened in 1794. Londoners nicknamed it “The Bastille, ”or just “The Steel.” It was a most unpleasant place, especially after the governors introduced the notorious treadmill. Of course, we pay to use treadmills today. 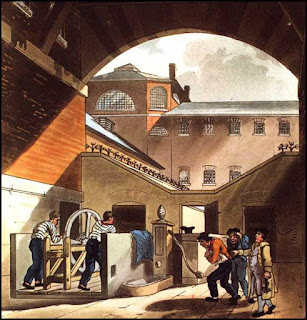 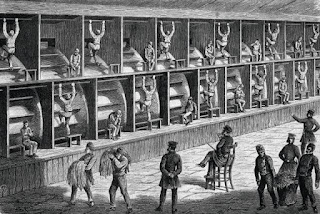 Clerkenwell is well worth a visit! But for heaven's sake, don't get caught thieving!
Posted by peter mccandless at 18:47 No comments: