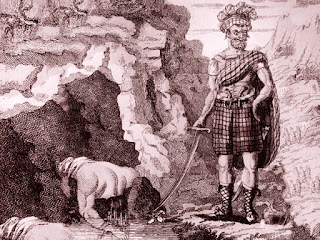 OK, I made up the philosopher bit just to get your attention. But the rest is absolutely true. England has Robin Hood and King Arthur. Scotland has the Loch Ness Monster and Sawney Bean. No one doubts that the Monster of the dark, deep loch exists. Many historians doubt that Bean existed, but then historians love to question our most cherished beliefs.

The fact is we have pictures of Bean, so that should settle the matter. Have you ever seen such a clear picture of the Loch Ness Monster as the ones of Bean above and below? I'm sure you haven't. (Images courtesy of FOX news) 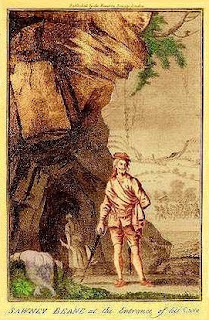 If he did exist, Bean lived precisely sometime between the 13th and the 16th century, and exactly somewhere in a cave in Scotland. What is known for absolute certainty is that Bean was the leader of a clan of 48 people who lived by kidnapping people, robbing them of their clothes and other material possessions, and then having them for supper. Not as guests. Bean was a Cannibal and that och aye, rhymes with Hannibal. 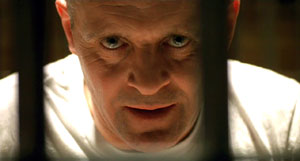 We know beyond a shadow of a doubt that Bean's vicious gang ate over 1000 people and was routed by an army of 400 led by King James I of Scotland, and then executed but not eaten. Some versions say it was King James I of England who beat the Beans. As every schoolboy knows, he was King James VI of Scotland first, before Queen Elizabeth, not the present Elizabeth, but the first one, died without any issue (a kid). (Image: King James, number uncertain.) 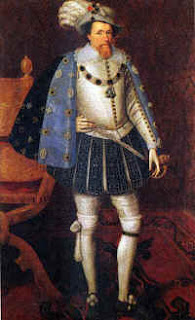 As far as we know, that King James, whatever his true number, did not actually eat Queen Elizabeth to gain the throne, but history records that he did enjoy eating English food. After decades of haggis, neeps, and kippers, it's hardly surprising. Stories rapidly circulated that he was particularly fond of bangers and mash, which is actually a euphemism for (censored). 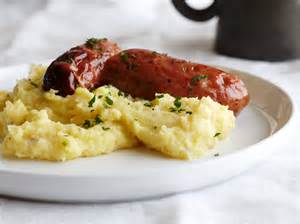 But I digress. This article is about Mr. Bean. No, not that Mr. Bean. The source of the Sawney Bean story, it appears, is something called The Newgate Calendar, a London publication that related the stories of famous criminals. This has led some thin-skinned Scots to claim that the English made up the story of Sawney to denigrate Scots. (See SNP)

I do not believe this for a minute. My reasoning is that most of the criminals chronicled in the Newgate Calendar were English. If Bean didn't exist, he must have been invented by the Scottish Tourist Board. (Image of Thistle)

What we can properly accuse the English of is appropriating Bean as an icon of Scottish barbarity. In the 18th century, many English folk were troubled to find that by some devious plot, Scotland had craftily managed to unite with England in something called Great Britain.

This union would have been great indeed if all the Scots had left to fight against the French and Indians. But perversely, only some of them did. Others discovered the High Road to London, the Scotsman's favorite prospect. Hordes of starving kilted bagpipers descended upon the capital. Naturally, the good people of England and Nigel Farage did not like this, as the following image reveals: 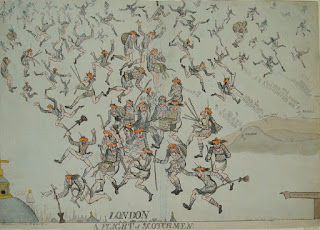 The biggest problem with these Scots, it seems, was that they lacked proper toilet habits. This complaint was lodged with abundant clarity in a popular cartoon called Sawney in the Boghouse, which I post below, courtesy of Acme Toilet Cleaners. 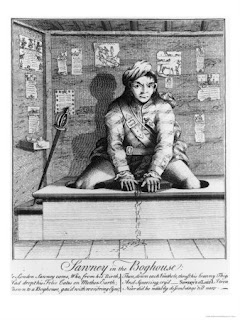 Needless to say, this sort of thing did not contribute to amicable relations between the North Britons and their southern brethren, as this English cartoon  of 1792 shows. 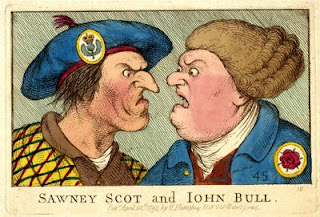 Fortunately, relations have improved immensely since then. Other good news: lots of people are making money of the Bean story these days. I hope to be one of them.

Posted by peter mccandless at 19:13 2 comments:

As pointed out in my last post, artists were among the first to study anatomy of the human body, in order to portray it accurately. By the late 18th century, some artists, informed by anatomical study, were questioning traditional artistic depictions of the crucifixion of Christ, such as these by Mantegna and Masaccio. 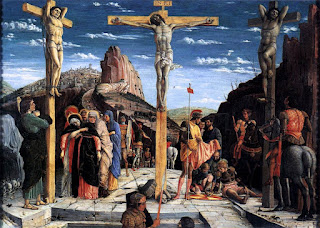 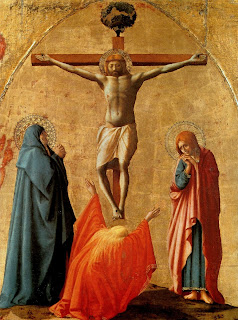 In 1801, three British artists, two painters, Benjamin West and James Cosway, and a sculptor, Thomas Banks, set out to test their belief in the inaccuracy of most depictions of the crucifixion. They were able to experiment using the corpse of an executed murderer, James Legg. At the time, the bodies of executed felons were the only legal source of "subjects" for anatomists, or in this case artists.
The artists took the body of Legg from the gallows and nailed it to a cross, and flayed it. The gruesome result is shown in the picture below, taken when Legg was on display at the London Museum a few years ago. The experiment, however unpleasant, did show that traditional depictions of the crucifixion were anatomically incorrect. 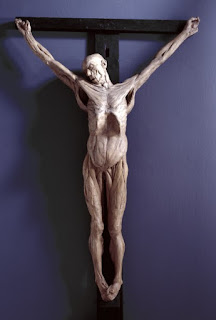 Interestingly, an amazingly similar picture can be found in an illustration by the French artist Jacques Gamelin more than twenty years earlier (1779).  Did Gamelin try the same experiment? Were the British artists influence by Gamelin? If anyone knows, I'd love to hear.

Posted by peter mccandless at 12:23 No comments: