London Walks: A Curious Walk along the Thames: Rotherhithe, Deptford, and Greenwich

On yet another beautiful day, I resumed my walk on the Thames Path, along the South Bank of the river. I started where I had ended the previous walk, at the Brunel Museum in Rotherhithe, just past the Mayflower Pub. I soon came to the curious statue below, at Cumberland Wharf. From here, the ship Mayflower left for the New World in 1620. The statue, put up in the 1990s, is of a Pilgrim and a young Londoner of the 1930s reading a popular boy's magazine called the Sunbeam Weekly. But the sculptor, Peter Maclean, has spelled it "Weakly." A joke or just a mistake? Other curiosities: the Pilgrim has a lobster claw in his pocket, a crucifix, and a London A-Z Street guide dated 1620! The dog, by the way, is a Staffordshire Terrier, a popular breed in this area. 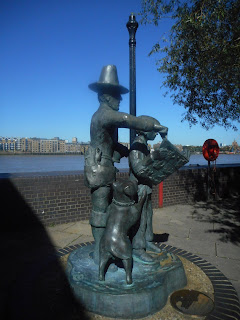 Leaving the statue in my wake, I soon found myself opposite the Isle of Dogs, once home to the vast East India Docks. The docks here operated from 1802 until 1980, when the triumph of mammoth container ships rendered them and most other London docks obsolete. Today, the area is home to the financial center known as Canary Wharf. 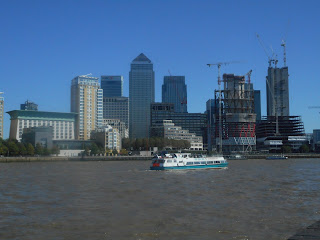 Resuming my trek on the South Bank, I passed the Docklands Hilton and arrived at the Surrey Docks Farm, a charming oasis of green, complete with farm animals, including pigs and goats. One can buy produce and enjoy a snack or meal in the farm's Cafe. 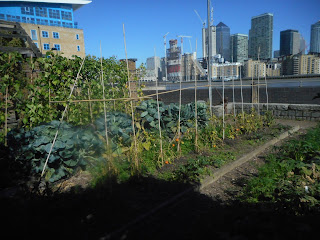 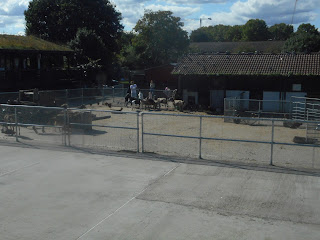 Just beyond the farm I came to the huge Greenland Dock, now a marina for boats of all shapes and sizes, mainly pleasure craft, canal boats, and houseboats. 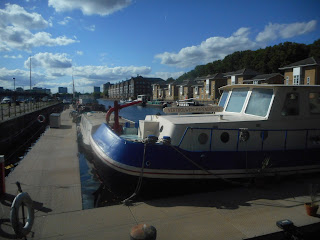 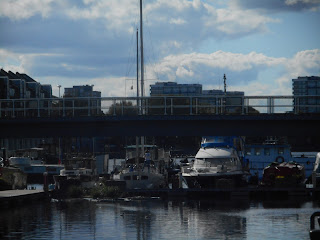 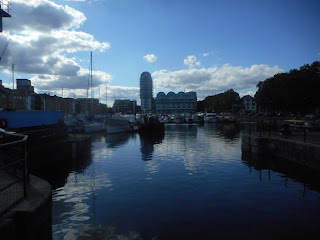 Greenland Dock is in the part of London known as Deptford. It is here that Elizabeth I knighted Francis Drake upon his return from circumnavigating the globe in his ship The Golden Hinde. A replica of the ship can be visited upriver in Bankside, at St Mary Overie Dock (see previous post). 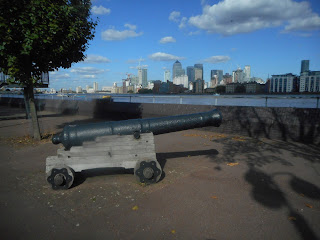 Things got curiouser and curiouser. After Greenland Dock, I had to take a short detour away from the riverfront. The detour took me through Sayes Court Park, where I encountered an ancient fenced mulberry tree with signs around it informing me that it was Evelyn's Mulberry, that it was entered in the contest for the UK's tree of the Year, and that I should vote for it. 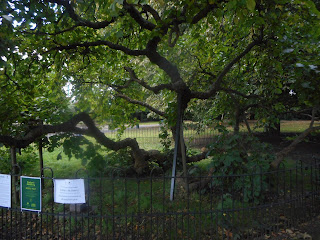 Legend has it that Tsar Peter the Great of Russia planted the tree during a visit to England in 1698. He planted it, so the story goes, to placate his landlord, the famous diarist John Evelyn, after doing some damage to the gardens during a drunken escapade. Other tales argue that the tree is older, perhaps planted during the reign of James I (1603-1624). Whatever the tree's origins, calling it Evelyn's Mulberry is justified. Evelyn owned the land it sits upon and he wrote one of the first books on trees in 1664.

After leaving Sayes Court Park, I quickly returned to the riverside and ran into Peter the Great again, memorialized in another curious statue. Peter had come to London mainly because he wanted to study British shipbuilding. He wanted to establish a western style navy in Russia. The statue itself is quite recent, a gift from Russia to commemorate Peter's visit. The little man to Peter's right is said to be one of his dwarf court jesters. Peter himself was extremely tall, 6'6" (2.03m). 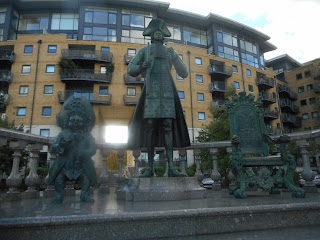 From the vantage point of Peter's statue I had a good view of my final destination for the day, Greenwich, dominated by the masts of the clipper Cutty Sark and the cupolas of the Old Royal Naval College. Both are now museums, in a place full of museums. There are also the National Maritime Museum and the Royal Observatory, where one can stand on the Prime Meridian. 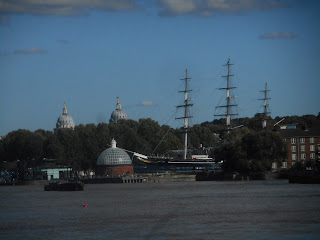 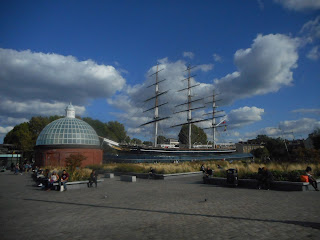 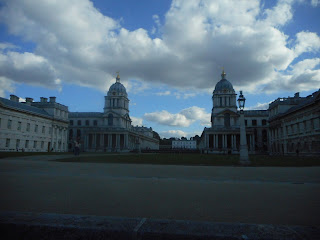 I had visited all these attractions on other occasions. The day was getting late, and I was getting thirsty, thus I wisely limited my time in Greenwich to a stop at the Trafalgar Tavern, guarded by yet another statue, this one of Britain's greatest admiral, Horatio Nelson. Compared to the Mayflower and Peter the Great statues, that of Nelson seemed rather prosaic! 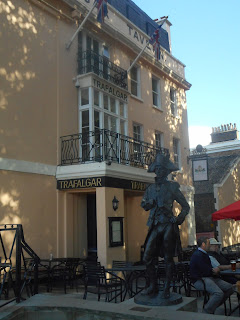 Posted by peter mccandless at 20:52 No comments: