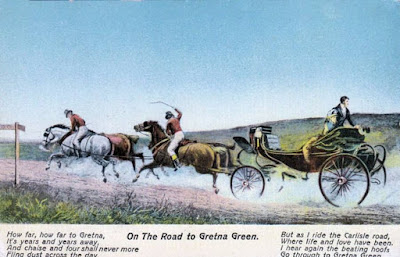 Just across the Scottish border with England lies the village of Gretna Green (hereafter, GG). Despite its small size, it is notable for several reasons.

The worst railway crash in British history occurred near the village in 1915, worse than the Tay Bridge Disaster of 1879. The Quintinshill Rail Disaster, involving several trains, led to the deaths of more than 220 people. More than 200 of them were Scottish soldiers on their way to Gallipoli, in Ottoman Turkey. 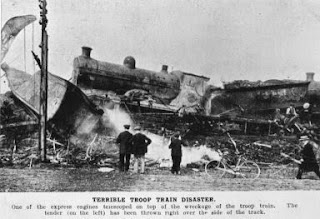 In the same year, the environs of Gretna Green became the site of the largest cordite factory built in the UK during World War I. The Ministry of Munitions had it built in response to the "Shell Crisis" of 1915. The British Army, fighting the Germans in France and Belgium, was running out of artillery shells.

By the time the Gretna munitions complex was complete, it extended twelve miles along the border and employed more than 16,000 people, more than half of them women. At its peak it produced more cordite than all the other munitions factories in the UK combined. 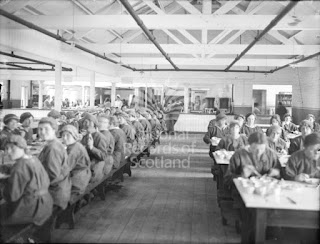 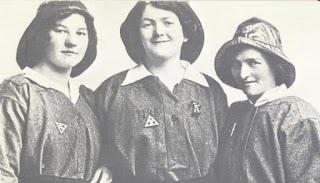 But GG is best known today for another industry -- the wedding business. For more than a century it had a mixed reputation as a place where where young English folk could get married quickly, without a fuss -- for a fee of course.

The making of GG's marriage industry (and the village itself) was Hardwicke's Marriage Act of 1754. The act was designed to prevent persons under 21 from marrying without their parents' consent. The persons in questions were mainly young girls from wealthy families.

The Marriage Act, however, applied only to England and Wales. In Scotland, which retained its own legal system after the Act of Union in 1707, the law continued to allow persons under 21 to marry without parental permission, from age 14 for males and 12 for females.

Scottish law also allowed for "irregular marriages." If the declaration of marriage was made before two witnesses, almost anybody could officiate at the wedding. One did not need to be a licensed clergyman.

Some canny Scots soon realized the opportunity these differences presented. And Young English folk desperate to marry as quickly as possible soon learned that their salvation lay on the high road to Scotland. (Image: Carriage Arriving at Gretna Green, c. 1800) 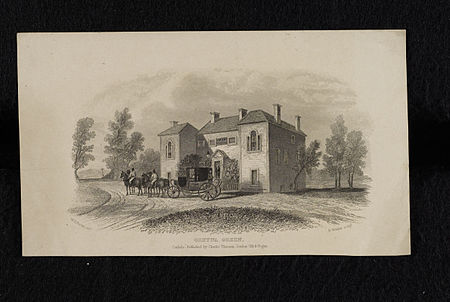 Situated directly across the border from England, here a small river, GG was providentially placed to profit from the new marriage business. In the 1770s, the construction of a new toll road that passed by the village made it the most easily reachable in Scotland.

Marriages in GG were often performed by local blacksmiths, who became known as "anvil priests." One of them presided at more than 5,000 weddings.

GG's role as a magnet for runaway couples is mentioned in many works of literature and in films. In Jane Austen's Pride and Prejudice, George Wickham convinces Lydia Bennet to elope with a promise of taking her to GG to marry. Instead he takes her to London where Mr. Darcy finds her and returns her to her family.

Changes in the law on both sides of the border eventually ended the  quickie marriage industry, though not the wedding business itself. In 1856, a new law in Scotland required a minimum of 21 days residence in the country before being married. That restriction was abolished in 1977.

In 1929, another act raised the age of legal marriage in Scotland to 16 for both men and women. The parties can still marry without parental consent. In England and Wales, they can now marry at 16 with parental consent, and at 18 without it.

GG was not the only Scottish border town where quickie marriages for English customers were performed, but it was unquestionably the most famous. Today that kind of fame is largely confined to Las Vegas, Nevada where anything goes and allegedly stays. Vegas also offers quickie divorces.

Because of its history GG remains a popular place for weddings, with several venues and hotels available. Services are always performed over the town's marriage icon, a blacksmith's anvil. One ad urges you to stay, marry, and dine for £545, a smashing wee bargain for the matrimonially inclined. You take the high road and I'll take the low road. 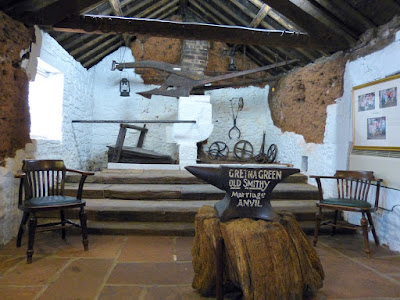 Posted by peter mccandless at 17:21 No comments: