On a stormy night in December 1879 one of the worst railway accidents in British history occurred. It resulted from the collapse of a bridge over the River Tay at Dundee, Scotland. A passenger train crossing the bridge at the time plunged into the river. 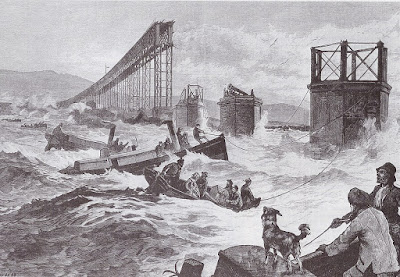 The estimated death toll was 75, with 60 known dead. History calls it the Tay Bridge Disaster. A government inquiry determined the cause as faulty construction that left the structure vulnerable to high winds. (Image: photo of the Tay Bridge showing collapsed section.) 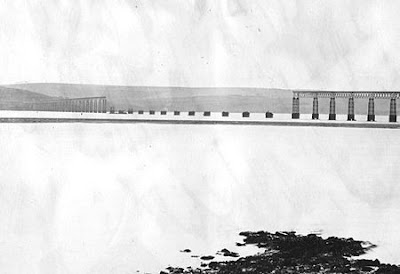 The Tay Bridge Disaster is remembered today more than most Victorian railway accidents because it is alleged to have led to another disaster: a poem of the same name by William McGonagall. This hard-rhyming Scots author has been labelled the worst poet in history. I don't know who called him that, but the claim is repeated in every reference to William, pictured below. 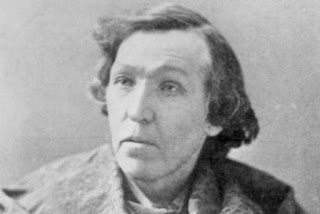 That judgment, I humbly maintain, is based on a narrow Anglo-centric analysis. The world in all its festering billions has surely produced worse poets than Willy McG. I would ask those who repeat that slur on the Poet, "Have you read his poetry?" But judge for yourself, Dear Reader. Here are the opening lines:

Alas I am very sorry to say

That ninety lives have been taken away"

OK, a bit of poetic license here, I admit. The Poet got the number of dead wrong. Dead wrong as it were. But one has to admit his lines do rhyme. How many modern poets accomplish that?

Moreover, he analyzes, forthrightly, the weaknesses of the bridge. He summarizes hundreds of pages of public reports in concise, vigorous -- one might even venture -- pithy language. And he adds a note of caution to us all. He tells the world

"fearlessly without the least dismay,

That your central girders would not have given way,

At least many sensible men do say,

Had they been supported on each side with buttresses

At least many sensible men confesses,

For the stronger we our houses build,

The less chance we have of being killed."

What solid advice in those last two lines!

In order to flesh out my defense of this unfairly maligned Bard, it is incumbent upon me to note that McGullagal wrote two other poems about Tay Bridges. He wrote the first after the bridge that later collapsed was opened in 1878. He gave it the apt title "The Railway Bridge of the Silvery Tay."

Here he anticipates a great song of the future -- "By the Light of the Silvery Moon". It is also worth noting how he charms us by altering "silvery" with "silv'ry."

The Poet praises the first bridge as the "Beautiful Railway Bridge of the Silvery Tay" as the best of all bridges, a bridge "unequalled to be seen." Yet, ominously, he seems to have had an ominous feeling about it.

"I hope that God will protect all passengers

By night and by day,

And that no accident will befall them while crossing

The Bridge of the Silvery Tay"

WE can imagine the Poet had already found here the theme of his second poem about the Tay Bridge, the one about the bridge's collapse. Perhaps he had already begun to write it, to be ready just in case. We wonder how his poetical career might have been altered had the first bridge stood erect and firm.

McGagitall wrote the third of his bridge trilogy about the second Tay railway bridge, built to replace the collapsed one. It is entitled, with Willy's typical genius, "An Address to the New Tay Bridge." This poem is brimming with self-confidence. We find The Poet at his cheeriest, predicting a long-lasting and satisfactory erection.

"With your strong brick piers and buttresses in so grand array,

And your thirteen central girders, which seem to my eye

The Poet excels himself here with his uncanny prescience. The second bridge remains firmly erected in the Year of Our Lord 2021. It carries trains across the Tay right up to this very day.

WE would be remiss if we did not call attention here to the sheer economy of McGoonagall's poetry. Compare the opening lines of his three Tay Bridge poems:

Note the subtle changes he makes in each opening line to convey the mood of the poem's situation.

The first is triumphant, befitting the rise of an erection that will inject new life into the town of Dundee.

The second is more subdued. This is a sensitive opening, attuned to the tragic subject matter. He omits the enthusiastic exclamation mark and removes the caps from "railway" and "bridge". The Poet effectively dismisses the fallen erection as simply not up to the job. Which is of course true, since large bits of it are in rather than on the Tay.  A subtle distinction perhaps, but crucial in practical terms.

The third opening line marks a revival of the enthusiastic optimism of the first. but in a more muted, cautious way. The bridge is no longer "beautiful." It is "BEAUTIFUL." The word "new" is cleverly added, alerting the reader to the undisputed fact that this poem is not about an old bridge that couldn't.

The way the Poet transmutes these opening lines is awe-inspiring, even jaw-dropping. I could say much more about this unfairly maligned Bard. But here I will put down my pen in envy of his poetic art. They don't make poets like McGonadgall anymore. We shall never see his like again.

PS. It remains incumbent upon me to add that although McGullabal was born in Scotland, he was of Irish ancestry. This may explain his unique lyrical skills.

Posted by peter mccandless at 18:28