[Above: Punch cartoon of Disraeli on left, and Gladstone as two characters from an operetta by Burnand and Sullivan]

William Gladstone and Benjamin Disraeli ("Dizzy") both served as Prime Ministers of the United Kingdom in the late Victorian era. Gladstone held the premiership on four separate occasions, more than other PM in British history. Disraeli held the highest office twice.

Both were men of great ability. They were also bitter rivals, who hated one another. Gladstone considered Disraeli to be devoid of any political principle beyond personal ambition. "The Tory Party," Gladstone claimed, "had principles by which it would and did stand for good and for bad, but all this Dizzy has destroyed." Disraeli, he more than implied, was a mere opportunist. To some extent, that was true. On one occasion he told a fellow Tory, "Damn your principles! Stick to your party."

Disraeli returned Gladstone's criticism with interest. Gladstone, he once said "has not a single redeeming defect." Asked to define the difference between a misfortune and a calamity, Disraeli replied, " If Mr. Gladstone fell into the Thames, it would be a misfortune. If someone fished him out again, that would be a calamity." Gladstone, he said was an "unprincipled maniac ... [an] extraordinary mixture of envy, vindictiveness, hypocrisy, and superstition."

Personality wise, they were very different. Gladstone was moralistic and serious. He was an excellent speaker who coined many lofty and oft repeated phrases, such as

"Nothing that is morally wrong can be politically right."

"National injustice is the surest road to national downfall."

"Selfishness is the greatest curse of the human race."

"We look forward to the time when the Power of Love replaces the Love of Power."

He was also long-winded. Some of Gladstone's contemporaries decried his long detailed speeches and apparent lack of humor  His wife once wrote him, "If you weren't such a great man, you'd be a terrible bore." Queen Victoria came to despise the cold way he addressed her: "Mr. Gladstone speaks to me as if were a lamppost," she wrote. [Below: Gladstone in 1879, portrait by John Everett Millais] 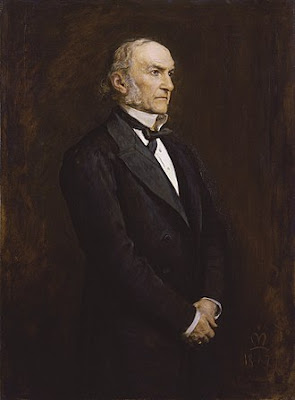 Disraeli mastered something Gladstone never could: flattery. Victoria came to love Dizzy because he fawned on her, treated her as a woman and a great woman at that. He delighted her by arranging her to receive the title "Empress of India." Of their relationship, he wrote, "Everyone likes flattery; and when it comes to royals, you should lay it on with a trowel." [Below: photo of Disraeli, 1873] 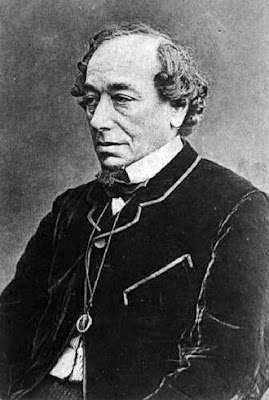 The two men differed considerably on many key issues of the day. Gladstone was a reluctant imperialist, Disraeli an enthusiastic one. Gladstone was a devout Anglican but championed freedom of religion.

Dizzy, who was of Jewish heritage but raised as an Anglican, defended stoutly the privileges of the state Church of England. It may have been out of conviction, but more likely it was for political reasons. It was an essential stance for a Victorian Tory leader.

Gladstone championed the political rights of the masses but often turned a blind eye to their social needs. He was a fiscal conservative and an economic liberal who condemned anything he considered socialistic. Freedom, for Gladstone, meant freedom from political oppression and economic restraints. People should be provided with opportunities to compete, but not aided by government. In Victorian terms, he favored laissez-faire economics. But he also campaigned fervently for the extension of political rights to the working class.

Once he became convinced of an injustice, Gladstone could devote himself to removing it. A case in point is Ireland. In the 1840s, at the time of the Irish Famine, he wrote,  "Ireland! That cloud in the west! That coming storm." He crafted numerous acts designed to remove glaring injustices, believing it was the only way to make the Irish loyal to the UK.

In the end, it was not enough. In the 1880s, he declared "We are bound to lose Ireland in consequence of years of cruelty, stupidity, and misgovernment, and I would rather lose her as a friend than as a foe." He attempted. and failed, to pass a Home Rule Bill that would have given Ireland a large degree of autonomy. The effort cost him his political leadership. A large part of his own party deserted him.

Parliament enacted Home Rule in 1914, but the outbreak of WWI delayed its implementation. When the war ended four years later, Home Rule became irrelevant. Most of Ireland opted for and fought for, independence.

Disraeli was more pragmatic about such issues. He championed selective government intervention to improve working class housing and working conditions, to regulate the sale of food and drugs, and to enact uniform sanitary codes. He introduced the first Workmen's Compensation Act in 1875.

In his first term as PM Disraeli tried to outflank Gladstone by introducing legislation to expand the suffrage to some of the working class. The move shocked many in his own party, who had long opposed any move toward democracy. Disraeli understood that the world was changing and that the Tories had to change with it.

The Reform Act of 1867 turned out to be more radical than his original proposal, partly because Gladstone and the Liberals proposed a number of democratic amendments. To the consternation of many Conservative MPs, Disraeli accepted most of them. He knew he would need Liberal votes to get the bill passed.

Disraeli hoped and expected to benefit from the Reform Act. He called an election, but Gladstone won a large majority. The new voters gave credit for the Act to the Liberals. In time, Disraeli was credited as the father of "Tory Democracy" who had dragged the party some way into the modern world. Gladstone later introduced a bill that gave the vote to all adult male heads of households. Despite their rivalry and their failings, they both contributed to the democratization and modernization of the UK in different ways.

Posted by peter mccandless at 16:49 No comments: 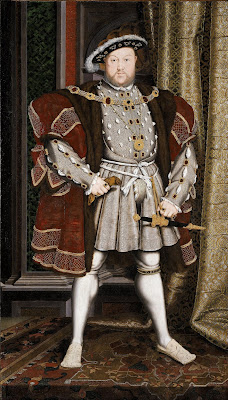 In 1538, Henry VIII began construction of a large palace on some 700 acres of royal land between Cheam and Ewell in Surrey. (Image: portrait after Hans Holbein the Younger)
Henry built the palace to celebrate the birth of a male heir, the future Edward VI. In his long quest for this son, he had broken with the Church of Rome, divorced one wife, and beheaded another. His third wife, Jane Seymour, died giving birth to Edward.
His dynasty now secure (he thought) he wanted to celebrate, show off his wealth and power, and add another hunting lodge to his collection. But not just another lodge. A lodge fit for a great king, as he saw himself.
Henry named the palace Nonsuch, he said, because there would be nothing else like it. A foreign visitor is said to have written "This which no equal has in art or fame, Britons deservedly do Nonsuch name." It sounds like Henry may have paid him to write that. Building the Palace consumed a vast proportion of the royal budget. It was not completely finished when Henry died in 1547.
The land is now a public park named for the palace. A visitor to Nonsuch Park today would find little evidence that a massive, ornate Tudor palace once stood there. All that is left is part of the foundations.
In one of history's great blunders, King Charles II gave Nonsuch Palace to his mistress, The Duchess of Cleveland, in 1670. With his permission, she had it demolished twelve years later, selling off parts of it to pay off gambling debts.
Only a few paintings and drawings exist to give us an idea of what Nonsuch Palace looked like. The first image below is a watercolor done in the late 1560s. The others are paintings from around 1600.

About ten years ago, Ben Taggart created a model of what Nonsuch Palace is believed to have looked like. His model was based on the work of an archaeologist begun in 1959.

Although the Palace is long gone, a large house can be visited in Nonsuch Park. It is called Nonsuch Mansion, and is sometimes mistakenly labeled in photos as "Nonsuch Palace"
The Mansion was built between 1731 and 1743 by Joseph Thompson.
Samuel Farmer bought the house in 1799 and employed Jeffrey Wyattville to enlarge and rebuild it in the Tudor Gothic style. It incorporates some details and a block of stone from Henry VIII's demolished Palace. The stone is inscribed "1543 Henry VIII in the 35th year of his reign." (English translation from Latin). 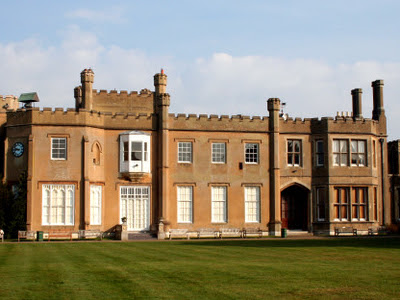 In 1937 the Farmer family sold Nonsuch Mansion to the local authorities of Sutton Borough and the Borough of Epsom and Ewell. It is normally open to visitors and has been used as a wedding venue. In this abnormal year of the Covid-19 pandemic it has been serving as a vaccination center for the local area.
Posted by peter mccandless at 18:04 No comments: