Most British pubs were originally designed to be pubs. But many, especially in recent years, began their lives as something else: banks, churches, houses, and in this case, an opera house. 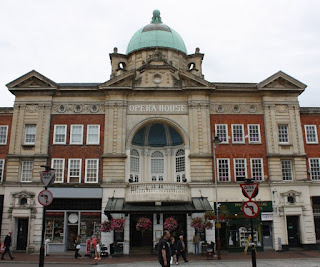 Tunbridge Wells, or Royal Tunbridge Wells, has been a popular place to visit since the 17th century. Its original attraction was its chalybeate springs, which were reputed to provide health benefits. By the 18th century it had grown into a town with lots of other attractions: inns, dancing, and gambling. Many among the leisured classes came to be entertained and enjoy the nearby countryside. In the 19th century, the visits of Queen Victoria, Prince Albert, and other royals helped boost the town's image. 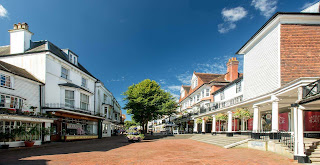 On a short holiday to Tunbridge Wells not long ago, I paid a visit to the Opera House. Almost immediately, I found myself up on the stage. A true story. If you go to the Opera House, you too can be up on the stage, or down in the stalls if you prefer. That's because this spectacular venue is a pub. But it began its life as a real opera house in 1902, seven years before the town was awarded its "Royal" prefix. The structure designed by John Briggs is a combination of Neo-Georgian and Edwardian Baroque. It had a seating capacity of 1100 for opera.

The later history of the building encapsulates much of 20th century British social history. In the 1930s, it became a cinema. It was hit by a bomb in World War II. The bomb didn't explode but did considerable damage. The building was renovated and reopened as a cinema after the war. In the 1960s, it was threatened with demolition but was saved by being transformed into a bingo hall. In 1966, it gained the protected status as a Grade II listed building.

The bingo craze subsided, and in 1996 Wetherspoons acquired the Opera House, adding it to its large chain of pubs. It still hosts occasional opera performances. The stalls (ground floor) and the stage are the main seating areas,. The balconies and boxes are seldom used, although they were packed in 2018 for England's games in the World Cup. If you are in Tunbridge Wells, the Opera House is definitely worth a visit.

A view of the stage. 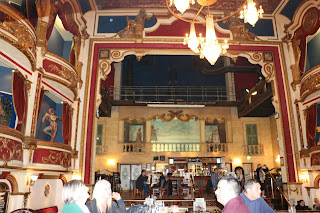 The stalls and balconies (and bar). 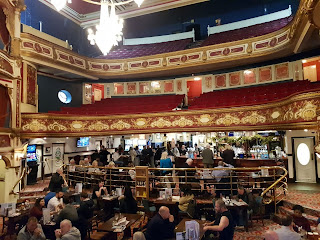 Some of the boxes. 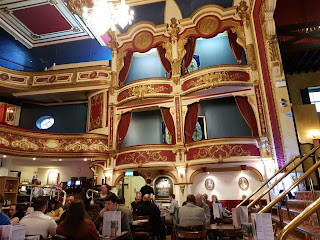 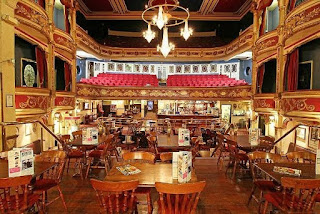 Posted by peter mccandless at 18:25 No comments:

How would you like to go to school in a mansion where Tudor Kings and Queens once stayed? In the grounds of Beddington Park in Surrey sits a large red brick building of considerable interest. Today it houses Carew Academy, but for centuries it was the seat of the aristocratic Carew family.
Visitors to the manor included Henry VIII, Anne Boleyn, Jane Seymour, Elizabeth I, and James I. They came to hunt, fish, meet lovers, and discuss politics. 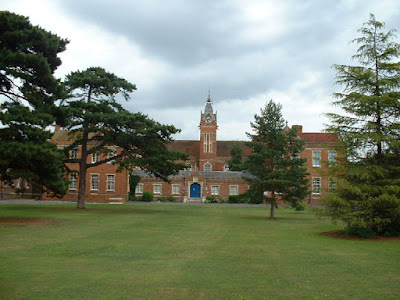 The rise of the Carews of Beddington dates from the late 14th century, when Nicholas Carew arrived in the area. He was a descendant of the Carews of Carew Castle in Pembrokeshire. He married the daughter of the manor's owners and the estate passed into his family. Nicholas rose to the high post of Keeper of the Privy Seal.

Sir Richard Carew, who owned the house from 1492 to 1520, either created or greatly enlarged the park now known as Beddington Park. In St. Mary's Church, next door to the manor, the Carew family chapel contains the impressive tomb and effigy of Sir Richard. 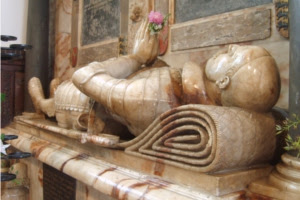 Richard's son, Sir Nicholas Carew was a favorite of Henry VIII and a member of his Privy Chamber. Henry hunted and courted Anne Boleyn at Carew Manor, while still married to Katherine of Aragon. After Henry had Anne executed for alleged adultery in 1536, he courted Jane Seymour at the manor. (Image: Sir Nicholas Carew, by Hans Holbein the Younger) 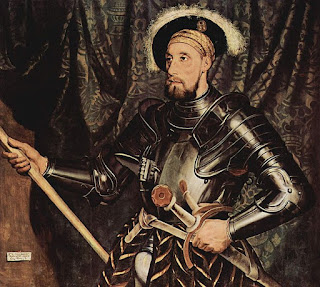 Unfortunately for Sir Nicholas, Henry had him executed as well, for alleged treason. He was beheaded on Tower Hill in March 1539. One popular explanation is that Carew beat the king at bowls. The real reason has to more with politics. Carew had alienated the king by championing Princess Mary, daughter of Henry and Katherine of Aragon.
Carew had also fallen afoul of Thomas Cromwell, the king's chief minister. With those two against you, your days were numbered. Anyway, Henry never let friendship get in the way of a good beheading. Cromwell himself soon fell to the axe.

The king confiscated Carew's estates, and the manor fell into other hands for a time. It was recovered by his son, Sir Francis Carew (1530?-1611) in 1554, during the reign of Mary Tudor (Bloody Mary).
Mary's successors, Elizabeth I and James I, visited Carew Manor during Francis' time, Elizabeth at least fourteen times. It is likely that royal visitors hunted deer in the large manor park, now Beddington Park and beyond to Mitcham.
An oft-told story relates that Francis delighted Elizabeth by presenting her with cherries out of season. Cherries were a symbol of virginity, the perfect gift for the Virgin Queen. Elizabeth's long-time favorite, Robert Dudley, Earl of Leicester also visited in the 1580s, and enjoyed fishing for trout in the nearby River Wandle. (Image: Robert Dudley) 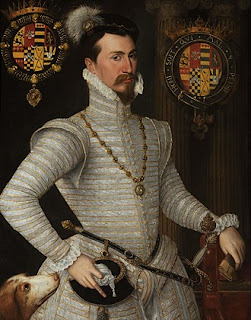 Despite entertaining royals, Francis avoided involvement in politics, perhaps because of his father's fate. He served in one parliament, but never held any government position or received any favors from the monarchs, a fact he was apparently quite proud of. His stance may have hurt the family's revenues, however.

Francis substantially rebuilt the house. He created a renowned garden and added what is believed to be England's first orangery. He never married. After his death, the manor passed to his nephew Nicholas Throckmorton, on condition he change his name to Carew.

The Carews fell on hard times during the following decades. They backed the losing Royalist side in the Civil War  of the 1640s and mismanaged their wealth.
The house became rundown, and another Nicholas Carew undertook major rebuilding in the early 18th century, adding to the family debt. Soon after the work was completed, a fire destroyed the interior of one of the wings. Debts piled up, exacerbated by reckless gambling. In 1859 the house was sold.

After undergoing major alterations, Carew Manor reopened in 1866 as the Royal Female Orphanage. That era ended in 1939, and as mentioned above, it is now a school, Carew Academy. Little of the original structure remains, but the 15th century great hall with its arch-braced hammer beam roof survives and is Grade 1 listed. 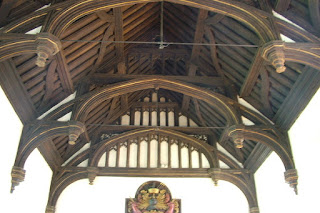 The hall is occasionally open to visitors.

Posted by peter mccandless at 12:10 2 comments: