The first recorded cremation in the United States is said to be that of Henry Laurens of South Carolina. Laurens was a Charleston merchant-planter who made a vast fortune through the slave trade. During the American War for Independence, he served as Second President of the Continental Congress (1777-78). In 1780, he was captured by the British at sea and imprisoned in the Tower of London, the only American ever to experience that "honor." (Image: Laurens by John Singleton Copley) 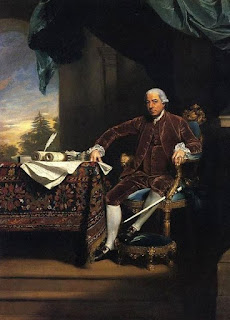 Laurens had a horror of being buried alive, a fear sharpened by the fact it nearly happened to his daughter. As an infant, Martha Laurens was declared to have died from smallpox. Laid out for a swift burial near an open window, she suddenly stirred, perhaps because of the cool air, and was spared the fate Laurens so feared.
(Image: Martha Laurens as a small girl, 1767, by John Wollaston) 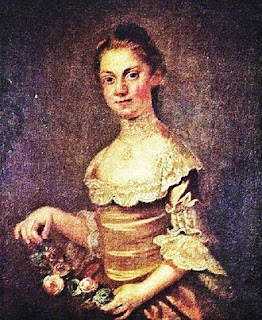 In his will Laurens directed that his body be “wrapped in twelve yards of tow cloth and burnt until it be entirely and totally consumed….” After his death at his beloved Mepkin Plantation in December 1792, his instructions were carried out. The plantation slaves built a large funeral pyre. Laurens’ body was placed upon it and set alight.

Martha, now Mrs. Ramsay, refused to witness what she called “the awful ceremony.” [457] Henry’s ashes were deposited in a grave next to that of his son John, who had been killed in action in 1782, near the end of the War for American Independence. [458]


Cremation probably appealed to Henry Laurens for another reason: it was a form of bodily disposal accorded to heroes in the classical world. It is notable that he had placed a classical inscription from the Roman poet Horace on John Laurens’ gravestone: Dulce et decorum est, pro patria mori ("It is sweet and honourable, to die for one’s country.") 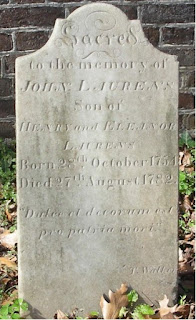 Laurens’ cremation may have been the first to be recorded in the United States, but some Native American nations had long employed it. The history of cremation spans many thousands of years, numerous cultures, and every continent. The Romans used cremation extensively, especially as a dignified send off for soldiers. Christians and Jews, however, opposed cremation in favour of burial in tombs.

After Roman Emperor Constantine adopted Christianity in the early 4th century, the Church condemned cremation as a pagan practice, and it was gradually abandoned where Christianity prevailed. During epidemics and after battles, however, bodies were sometimes burned, mainly for hygienic reasons. The smell of decaying bodies was long believed to be a source of deadly infections.

Henry Laurens’ cremation did not spark a trend. Few people even knew of it at the time. Nevertheless, opposition to the practice slowly declined during the late 19th century. Part of the increased interest in cremation arose from concerns that overcrowded urban cemeteries were a source of diseases like cholera and typhoid. Part may also have arisen from the same fear that drove Laurens to it: fear of premature burial.

Cremation as we know it today dates from the Vienna Exhibition of 1873, when Professor Ludovico Brunetti displayed his new invention: an efficient cremation furnace. News of his invention and improved models spread fast. The first cremation chamber in the United States opened in Washington, Pennsylvania in 1876. Since then, cremation has gradually become common in many countries.

Posted by peter mccandless at 22:35 No comments:

In his seminal biography of William Blake, published in 1863, Alexander Gilchrist relates that one day a visitor to Blake's house arrived to find William and his wife Catherine sitting in their garden summer house, stark naked. "Come on in," Blake famously called out to his friend, the aptly named Mr. Butts. "Its only Adam and Eve, you know!" 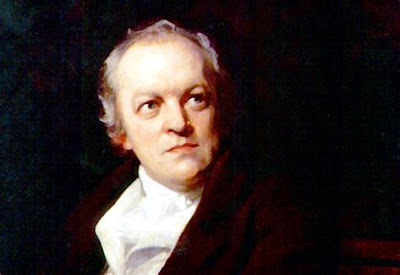 The artist and poet William Blake (1757-1827) was both brilliant and eccentric. Some of his contemporaries considered him mad, but that seems a step too far. Blake's artistic brilliance has recently been on display in a magnificent, comprehensive exhibition at the Tate Britain (ended Feb. 2, 2020). His eccentricity appears as well, in his style, subject matter, and comments by contemporaries. Gilchrist, who rescued Blake from obscurity, called him "a new kind of man, wholly original." It's hard to disagree with that.

Blake was unconventional in his life as in his work. His work, including paintings, engravings, etchings, and drawings, is chock full of spirits, angels, demons, humans experiencing pleasure and pain. Some of Blake's images were inspired by his reading and cultural milieu. Others sprang from his fertile imagination. Blake claimed to have seen supernatural beings, even conversed with angels in a tree. (Below: "The Good and Evil Angels") 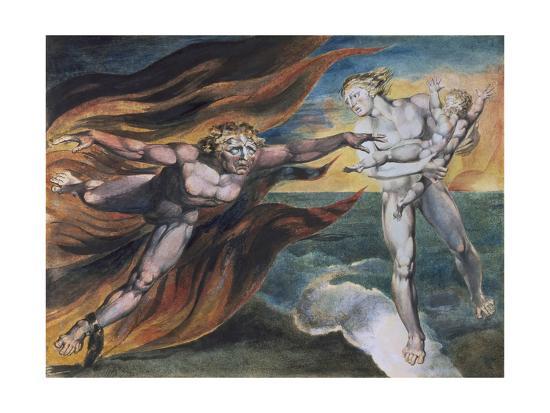 Many of Blake's characters have one thing in common: a lack of clothing. Blake obviously delighted in the human form, whether in physical or spiritual versions. In Blake's vision, mystical religion cavorts with eroticism. He portrays Adam and Eve in the buff, of course, but in a wholly sensual pose. Satan, angels, and God keep an eye on them. Only God is decently attired. 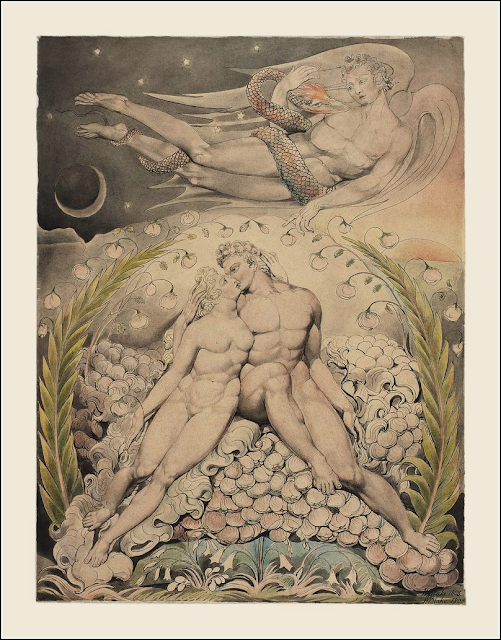 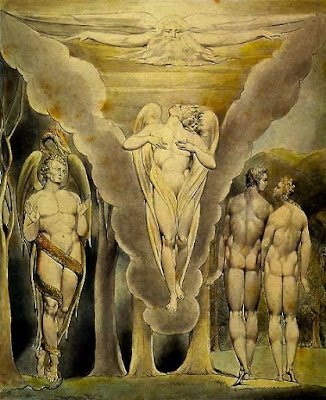 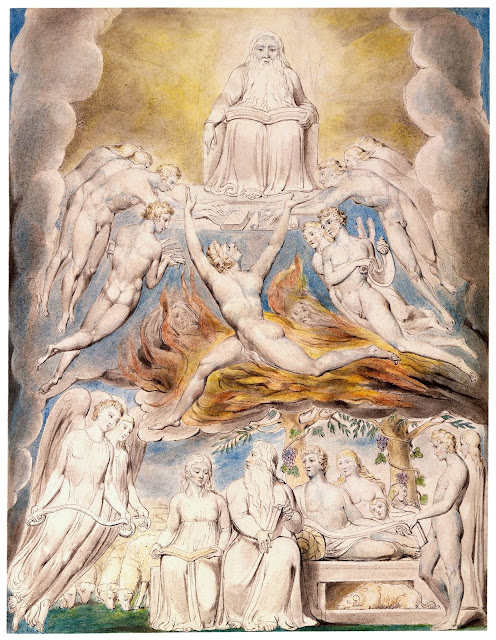 "Lot and His Daughters" shows the scantily clad daughters checking out their drunken Dad's equipment before, well, you know. 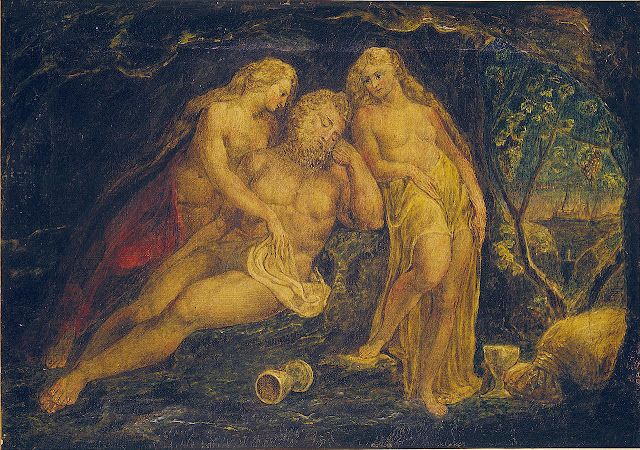 What we can see today was probably the tip of the iceberg. His executor, appointed by Catherine Blake, burned many volumes of  her husband's drawings and manuscripts.


William Blake certainly had highly unusual ideas for his time regarding sex, ideas influenced by religious mystics such as the Moravians, and the radical feminist Mary Wollstonecraft. At times, he endorsed a version of free love and condemned marriage as a legal prison. But his ideas were complex and changed over time, becoming more conservative as he grew older.

He once told a barrister friend that it was part of God's plan that he should have access to a "community of women." He cited the Bible: Did not God's Chosen, the Patriarch Abraham, have concubines? Blake's friend was taken aback: "Shall I call him Artist or Genius--or Mystic--or Madman? Probably all."

When Blake told his wife Catherine of his Abrahamic vision, she cried, and he abandoned his quest for concubines. It seems he was motivated towards the Abrahamic idea in part by Catherine's apparent inability to bear children. 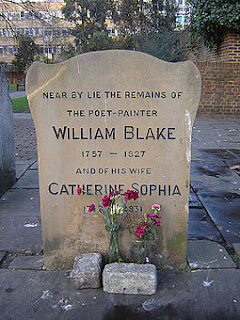 Posted by peter mccandless at 22:41 No comments: