The Murders on the Ratcliffe Highway: London, 1811

In December 1811, London was horrified by two murderous attacks on families in Wapping district within twelve days, claiming seven lives. Wapping was then a major port area full of docks and warehouses, businesses catering to the seafaring trade and sailors, full of low taverns, and brothels. It was a derelict and often violent neighbourhood, but it had never experienced anything like what happened in 1811.

The first attack took place on December 7, at 29 Ratcliffe Highway (now known as The Highway). The victims were three members of the Marr family and an apprentice who lived in a flat behind the Marr's linen draper’s shop. 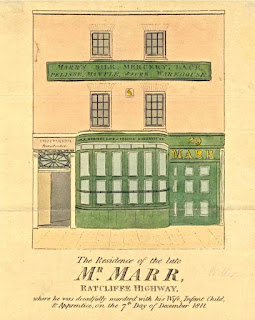 At sometime around midnight, an intruder entered the home and brutally bludgeoned to death Timothy Marr, his wife Celia, their four weeks old son, and the apprentice, James Gowan. A blood-stained maul (pictured below) found on the premises with the initials JP or IP was assumed to be the murder weapon. The Thames River Police investigated but could discover neither motive nor suspects. 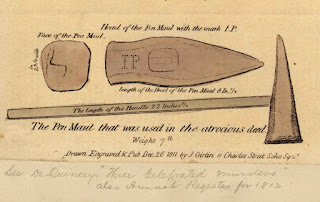 On December 19, a second murderous attack took place nearby at the King’s Arms, a tavern at 81 New Gravel Lane (now Garnet Street). After a constable had heard cries of “Murder!” a crowd gathered at the premises, where they found a lodger, John Turner, descending from an upper floor using a rope of knotted sheets. 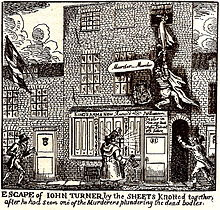 Turner was crying and nearly incoherent. Inside, the crowd discovered the bodies of the owner, John Williamson, his wife Elizabeth, and a servant, Bridget Harrington. Their skulls were crushed and throats cut. In a bedroom upstairs, they found the Williamson’s fourteen-year-old granddaughter fast asleep. Amazingly, she had heard nothing. Turner said he had been awoken by cries of murder. He claimed to have seen a man downstairs before fleeing out the window. The man Turner described was tall and stocky.

Bow Street Runners and constables from other districts joined the investigation after the second attack. (London did not have a centralized, professional police force until 1829). The press and a panicked public were clamouring for a quick arrest of the killer(s). Within a few days, the police arrested three men as suspects. One of them, a sailor named John Williams (or Murphy) was a lodger at a Wapping public house, The Pear Tree. (Image: John Williams, post-mortem sketch).

On December 24, the investigators learned from another lodger that the maul found at Marr’s shop belonged to a third lodger, John Peterson, who was at sea, and that Williams could easily have had access to it. Other discoveries led them to focus on him. Four days later, Williams hanged himself in his cell. The courts quickly ruled him the murderer. But curiously, he did not fit Turner’s description of the man he had seen in the King's Arms. Williams was slender in build and of medium height. All the evidence against him was circumstantial.

Home Secretary Richard Ryder, elated by the “solution” of the case, ordered William’s body to be publicly paraded through the streets of Wapping, and buried at the crossroads of New Road (now Commercial Road) and Cannon Street Road. The aim was to reassure the public that the murderer was indeed dead. On New Year’s Eve, the body was removed from the prison on a cart and followed by a huge procession estimated to be around 180,000 persons. The procession was the subject of many contemporary images. 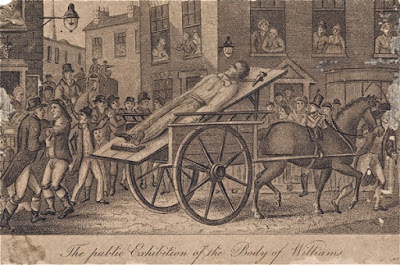 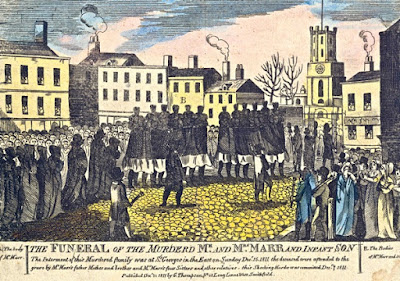 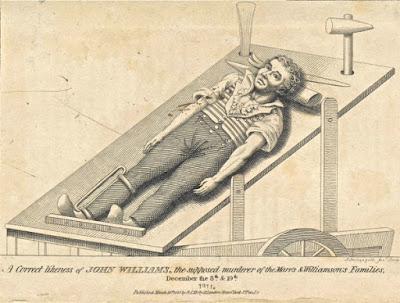 The marchers stopped before the houses of the victims before proceeding to the intersection named. A stake was driven through William's heart and he was placed in an already dug grave. At the time, suicides could not be buried in consecrated (church) ground and the stake was supposed to prevent his soul from wandering.

Debate continues today about whether Williams was indeed the killer, or merely the unfortunate scapegoat of authorities eager to appease the public clamor and panic. Other suspects have been considered, but the true identity of the Ratcliffe Highway Murderer remains a mystery, much like the identity of the Whitechapel Murderer, Jack the Ripper.

Posted by peter mccandless at 20:22 No comments:

A Visit to Bletchley Park, Where the Nazi Enigma Cipher Machine was Cracked. 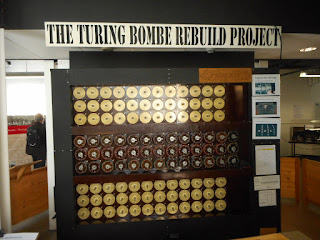 I visited Bletchley Park recently, the code/cipher breaking center where the Nazi Enigma cipher machines were cracked. The picture above is a replica of Alan Turing's "Bombe" machine that helped crack the ciphers. About 200 of these were built during WWII, but all were destroyed after the war. Fortunately, the blueprints survived and engineers built this one, and it works! One of the staff demonstrated for us how it worked. It did not actually decipher the Enigma machine messages, but provided the key to deciphering them much more quickly than previous methods. 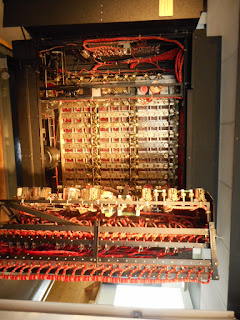 Below: Statue of Alan Turing at Bletchley Park. Nearby is an apology from Gordon Brown, when he was Prime Minister in 2009, for the government's prosecution and chemical castration of Turing under a now repealed sex crime law. 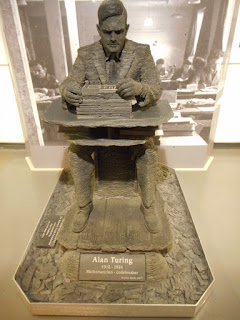 Work on code and cipher cracking began at the mansion at Bletchley Park (below), a Victorian Era structure built by a London stockbroker. His children sold it to the government in 1939 for 7000 pounds (that was a helluva lot more then, but still cheap). 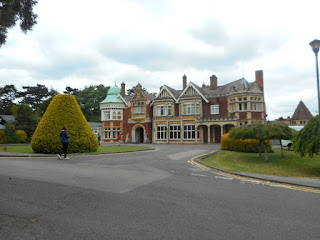 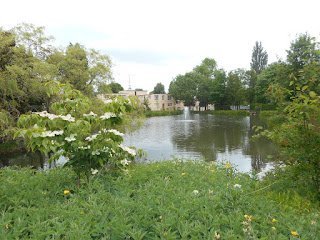 The initial staff was about 200. That grew to over 8000 during the war, and many other buildings and huts were built on the grounds, some of which can be visited. Some of the scenes in film the "The Imitation Game" were shot in the mansion, including the bar scene. 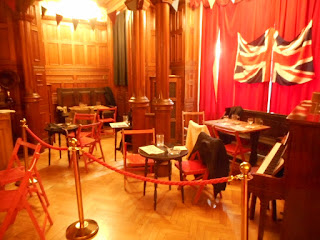 Personnel at Bletchley were forbidden to speak to anyone about their work there, even after the war. One couple who married after leaving Bletchley had no idea that the other partner had worked there until the 1970s when both were invited to a reunion of Bletchley workers.


Posted by peter mccandless at 16:42 No comments: