Since the start of the current pandemic, countries, states, localities have faced a stark choice: should they restrict human interaction by restricting commercial activity and risk harming the economy? Or should they allow businesses to continue to operate as normal, endangering people's lives?

In cities heavily reliant on commerce, epidemic diseases have long posed an agonising dilemma. Closing a city to trade through strict quarantine threatens people’s livelihoods. Leaving it open, even partially open, threatens their lives. As is the case with Covid-19, both options had their advocates and opponents.

Charleston, South Carolina, provides an instructive case study of this dilemma. From its foundation in 1670, this southern port was dependent on global trade. At the time of the American War for Independence in the 1770s, South Carolina was the richest of the thirteen colonies. Its wealth derived mainly from exports of rice, indigo, and after 1800, cotton; crops grown on plantations worked by thousands of enslaved Africans. The reliance on this labour source required regular imports of human cargo. [Image: Charleston Harbor, early 19th century] 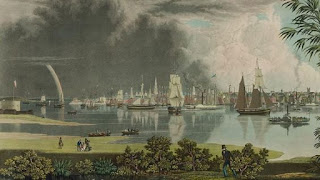 As a commercial port, Charleston received unwelcome imports of another sort: diseases from Europe, from Africa, from the Caribbean, and other North American colonies. Some of these imported diseases were highly contagious and deadly, notably smallpox. One, cholera, was transmitted mainly through contaminated water. But nasty as it was, cholera did not arrive until the 1830s and was only an occasional visitor thereafter.

Other imported diseases were transmitted by insect vectors, particularly mosquitoes. The most important were malaria and yellow fever. Two types of malaria were imported: vivax malaria from Europe and the deadlier falciparum malaria from Africa. Malaria became endemic in South Carolina from the early days of the colony. It flared up every summer and lasted into the late autumn or early winter. It was generally a greater problem in the countryside than in Charleston, especially after about 1750.

Unlike malaria, smallpox and yellow fever were epidemic diseases. They were not an annual problem, but when outbreaks occurred, they could produce widespread terror and high mortality rates in a short time. Until the early 19th century and railroads, yellow fever was largely confined to Charleston because its mosquito vector was a poor flier. Smallpox, by contrast spread widely into the countryside, wherever infected humans travelled. But it came less often than yellow fever.

How to prevent or minimize the effects of epidemics was always contentious issue for the city’s leaders. It was complicated in the case of yellow fever by difficulties of diagnosis and conflicting views of how it spread. One view was that it spread through the air, through miasmas, or bad air. Another was that it was contagious, passing from person to person. Neither view was correct. The role of mosquitoes in transmitting yellow fever was not established until 1900.

Miasmatists and contagionists differed over the best way to limit the spread of yellow fever. Miasmatists generally believed that disease-causing bad air was generated locally. Closing the port would do little to control the fever, they insisted.

Contagionists viewed yellow fever as imported, mainly from Africa or the Caribbean. The best way to control it, they argued, was through quarantine measures. Ships coming from places where yellow fever was common or known to be present should be inspected by physicians. If found to be harbouring the disease, the ships should be ordered into quarantine. Crew and passengers should remain on the ships just outside the harbour or be removed to the pest house or quarantine station until they were no longer considered a danger.
South Carolina erected the first of several pest houses on nearby Sullivan’s Island around 1707. Quarantine measures were the dominant way of controlling yellow fever and other epidemic diseases in the 18th century. They were supported by most doctors.

Opposition to quarantine measures for yellow fever increased markedly after 1800. The change was undoubtedly connected to economic decline in South Carolina and Charleston’s sagging importance as a trading port. Interruptions of commerce became a more serious problem than they were in the 18th century. Acknowledgement that yellow fever was present in a port could greatly reduce its seaborne trade and sharply curtail visitors and potential immigrants.

Merchants, city leaders, and most doctors in Charleston were increasingly reluctant to declare the presence of yellow fever. They would first deny that a problem existed. When the problem became obvious, they denied that the disease was yellow fever but something less dangerous. When forced to concede that yellow fever was epidemic, they argued that quarantine measures would be ineffective, because the disease was generated locally through bad air.

The solution, they believed, lay in sanitary improvements. Eliminating sources of bad odours, cleaning the streets, removing organic wastes and offal, and providing clean water. These measures could have improved health in other ways, but they would have done little to stem yellow fever.
In any case the city’s sanitary condition did not improve much before the early 20th century, when yellow fever had ceased to be a problem. One reason is that sanitary improvement was expensive and often collided with personal and property rights.

A miasmatic explanation of yellow fever, combined with attempts to deny the presence of the disease, had a clear economic advantage. It reduced disruptions to seaborne commerce. Imposition of quarantine measures was delayed, limited, or altogether avoided.
The fact that most of the victims of yellow fever were “strangers” -- visitors and immigrants, mainly Irish and German – may have made that choice more palatable. It also reduced the number of immigrants, which some locals did not much mind. Charleston's reputation as a yellow fever hotspot for foreigners is one reason why it did not receive as many immigrants as New York, Boston, and Philadelphia.

In 1840, Dr Benjamin Strobel of Charleston wrote a highly controversial essay on yellow fever. He accused commercial interests, boards of health, and the medical establishment, of endangering human lives. Worse, he charged them with "exploiting public ignorance" to rouse opposition to quarantine. The very people who would benefit from quarantine became its most vociferous opponents. [Image: Benjamin Strobel, 1803-1849] 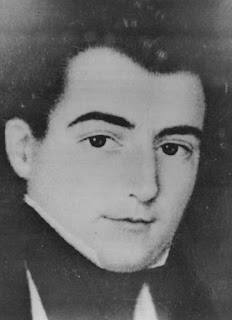 Strobel demonstrated that yellow fever usually broke out and was heavily concentrated in areas of Charleston closest to the wharves and where sailors and immigrants lodged on arrival. He avoided the thorny issue of contagion. Instead, he argued that yellow fever was somehow transmissible. And he was sure it had been transmitted to the city from ships.

In the 1850s, several lethal epidemics coincided with the opening of a steamship link with Havana, Cuba, a port notorious for endemic yellow fever. In the wake of these outbreaks, support for quarantine measures grew, with a Citadel science professor, William Hume, leading the charge. Hume had been an advocate of miasma theory, but his research convinced him that yellow fever was imported, mainly from the Caribbean.

Yellow fever was absent from Charleston during the Civil War. Probably not coincidentally, so was most seaborne trade. The last epidemic in the city occurred in 1877. How much that owed to stricter quarantine is difficult to say. The decline of the port’s seaborne trade may have been more important.
Yellow fever continued to strike busier southern ports hard, notably New Orleans, which suffered the last epidemic in North America in 1905. Yellow fever in the 19th century South, as Margaret Humphreys has stated, “was above all, a commercial problem.” And sometimes, local authorities chose the health of commerce, as they saw it, over the health of the people.