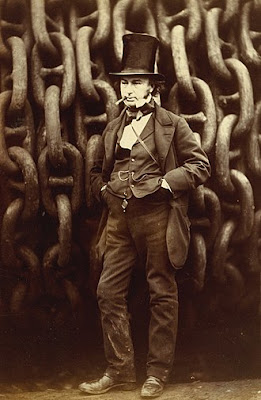 In 2002, the BBC aired a TV series called 100 Greatest Britons. The show was based on a TV poll designed to see who British people considered the greatest Britons in history. The series included ten episodes featuring the top ten vote getters. Viewers were invited to vote after each program.

The original poll included some surprises, including Guy Fawkes, who was executed for his role in attempting to blow up Parliament in 1605. He didn't make the final ten, but I suspect he might if the poll were held now.

Less of a surprise due to her recent demise, Princess Diana came in third, beating Darwin, Newton, and Shakespeare. It seems that the voters viewed her as a more significant historical figure than three of history's greatest geniuses. But, you know, royals....

Perhaps most surprising was that an engineer came in second of the the top ten. He led the polling for weeks only to be edged out in the end by a comedian, Winston Churchill.

Yes, Isambard Kingdom Brunel (1806-1859) was voted the second greatest Briton of all time! Never heard of him? Shame on you. He was surely one of the greatest engineers of all time.

One reason for Brunel's high rank in the poll was the fervent campaigning of the students of London's Brunel University -- which as you can guess, was named for I. K. Brunel.

Although few English folk in these Brexit days may like the fact, Brunel was half French. His father, Marc Brunel, was a refugee from Napoleonic France who married an English woman. Marc was also an engineer.

Isambard followed in his father's footsteps. His first major project was assisting Marc in the construction of the first tunnel under the Thames (1825-43). The Thames Tunnel, connecting Rotherhithe and Wapping, continues to operate as a railway tunnel for the London Overground. [Images: Thames Tunnel in the 1840s, before it became a railway tunnel, and train exiting the tunnel at Wapping in 1870] 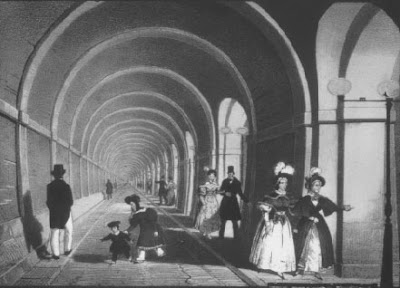 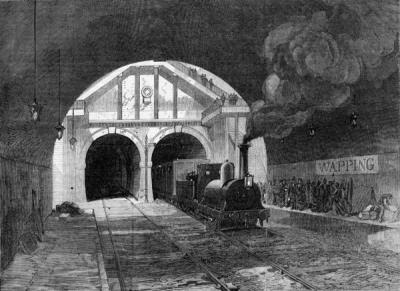 In 1831, Isambard designed one of the great landmarks of the West Country, the superb Clifton Suspension Bridge across the Avon Gorge in Bristol. He designed many other notable bridges, including the Royal Albert Bridge across the Tamar River in Plymouth, which opened in the year of his death, 1859. [Images: Bridges] 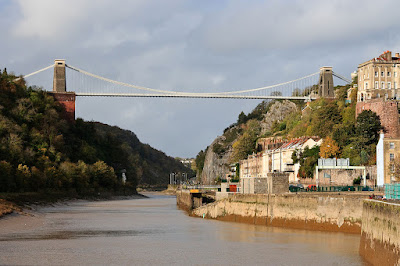 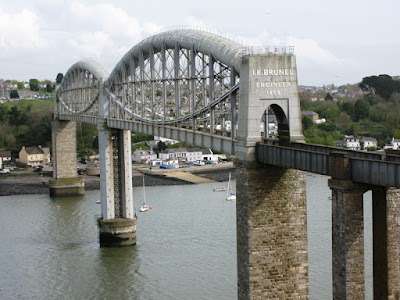 In 1833, Brunel became chief engineer of the Great Western Railway, an enormous project that ran from London, Paddington to Bristol and later, Exeter in Devon. Brunel designed nearly everything, including stations, tunnels, and viaducts, and the Royal Hotel in the spa town of Bath. The Box Hill Tunnel was the longest in the world when it opened at 1.41 miles. Brunel designed it so that the sun would rise at the entrance on his birthday! 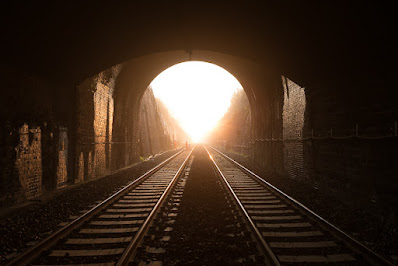 In conjunction with the railway, Brunel designed a system in which  passengers could buy a ticket in London that would take them all the way to New York by rail and steamship. For the purpose, he designed a new ocean-going steamship, The Great Western (1838). At 236 feet, it was the longest ship in the world when launched. Its maiden voyage proved the practicality of transatlantic commercial steamship travel. [Image: The Great Western on its maiden voyage] 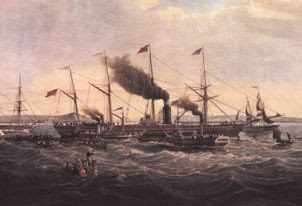 This success led Brunel to design a larger (322 ft) steamship: The Great Britain (1843). It is considered the first modern ship because Brunel used propellers instead of paddle wheels to drive it, and built it of iron instead of wood. It has survived to this day and can be visited in Bristol harbor. [Image: Launch of the Great Britain] 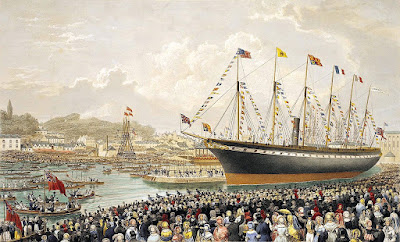 In 1852, Brunel began work on a monster iron steamship, the Great Eastern. At almost 700 feet (210m) long, it was the largest ship built before the beginning of the 20th century. It was originally an d fittingly called the Leviathan. [Image: Great Eastern] 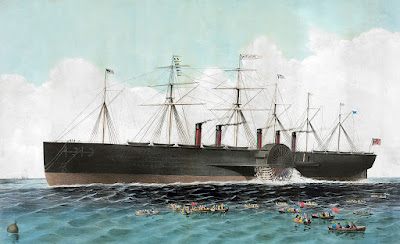 The Great Eastern was designed to carry 4000 passengers, far more than any other ship of the time. Brunel intended it for service to India and Australia, but that was not to be.

Construction was marred by cost overruns and technical problems, and it proved uneconomic as a passenger ship. It was simply too big for its time. There were just too few customers who could afford the price of filling its cabins. Brunel himself died before its first voyage.

The Great Eastern was not a complete failure. It was used to lay the first transatlantic telegraph cable from London to New York in 1866, bringing about instant communication between Europe and America. It ended its life as a floating music hall and a floating billboard for Lewis's Department Store.

To our great loss, The Great Eastern was sold and broken up for scrap in 1889-90. But Brunel had his revenge in 2002 by being named the second greatest Briton.

Posted by peter mccandless at 23:35