Remember, Remember the Fifth of November: Guy Fawkes and the Gunpowder Plot

Remember, remember, the Fifth of November,

I know of no reason why Gunpowder Treason

Should ever be forgot.

To blow up King and Parliament.

Three-score barrels of powder below

By God's Providence he was catch'd

With a dark lantern and burning match.

And what should we do with him? Burn him!

[Below: The Discovery of the Gunpowder Plotters, Henry Perronet Briggs, 1823] 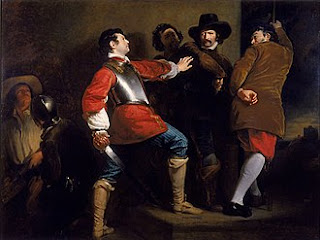 The nursery rhyme above, or variants of it, has been part of British culture since the 17th century, as has the custom of Bonfire Night, or Guy Fawkes Night. On November 5, effigies of "The Guy" are burned in bonfires all over the UK.

The idea of burning "The Guy" in effigy is reflected in the rhyme's last line: "And what should we do with him? Burn him!" On the night the actual plot was foiled, the government  ordered the lighting of bonfires to celebrate the King's (James I's) deliverance. It's not clear when or why burning the Guy first became a part of the celebration. At first, revelers burned effigies of the Pope.

Burning "The Guy" eventually became a tradition in later years, though it's not clear why Fawkes was singled out. He was the explosives expert, but only one of fourteen conspirators led by Robert Catesby. They were all Roman Catholics whose goal was to destroy the Protestant ruling elite with one blow and restore Catholicism in Britain.

[Below: A contemporary Dutch image of some of the Gunpowder Plotters. Fawkes is third from the right. He is named here as "Guido" Fawkes, the name he took when fighting for the Spanish.] 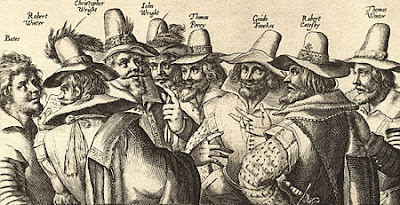 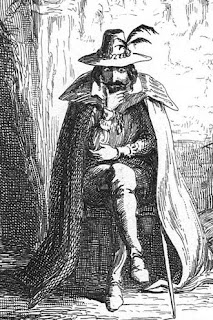 In case you are wondering, the real Guy Fawkes was not burned to death. He and several co-conspirators were hanged, then cut down and drawn (disembowelled) while still alive, and finally quartered. This was the traditional punishment for treason, then an act against the King. Fawkes managed to avoid the worst part. He threw himself off the scaffold, breaking his neck. He was dead when they cut off his privates, removed his guts, and chopped his body in pieces.

The reason for this horrific proceeding, other than sheer sadism, was to teach a political lesson. Various body parts were hung up about the kingdom to warn people with similar ideas of their possible fate. The other plotters were killed resisting arrest.

In 1606, Parliament passed an act making November 5 a day of thanksgiving. The celebrations often led to attacks on Catholics. This was true in British America  as well into the 19th century. But with the influx of Catholic immigrants in the 19th century, Halloween gradually replaced Bonfire Night as an autumn celebration.

In the UK the act establishing a day of thanks giving was repealed in 1859 out of concern for Catholic sensibilities. But by then the lighting of bonfires on November 5 had become a firmly embedded tradition in most British communities.

Anti-Catholic feelings remained part of the tradition for some decades, but gradually Bonfire Night became more focused on general fun and a bit of mischief. During the late 19th century that effigies of the Guy generally replaced ones of the Pope on the bonfires. But Lewes, Sussex continues to burn an effigy of Pope Paul V, who was pope in 1605. 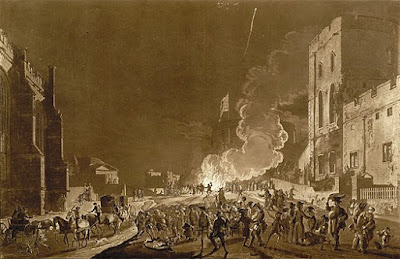 In many communities, children made The Guy, who was then processed to the place of "execution." The children would cry out "Penny for the Guy!" I recall doing it myself in Scotland as a child.
[Below: Procession of a Guy, 1864]. 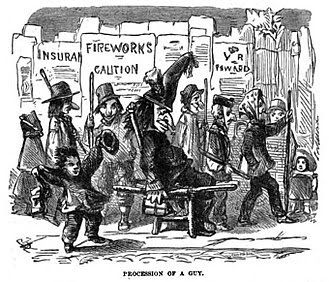 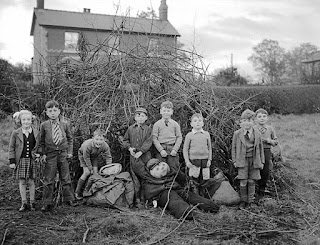 Today Bonfire Night is a purely secular social event accompanied by fireworks and enjoyed by people of all religions and none. Few observers are likely to know the religious and political origins of the tradition.

In a strange turn of events, many people now view Fawkes as a counter-culture hero for attacking the Establishment. Protestors often wear Guy Fawkes masks. Those who romanticize Fawkes should be aware that had the 36 barrels (2500 tons) of gunpowder under Parliament been detonated it would have destroyed everything up to 500 meters from the center of the explosion.

This year, 2020, things will not be normal (surprise!) Many, perhaps most, communities will not be holding Bonfire Night events due to Covid-19. Better luck next year, Guy! 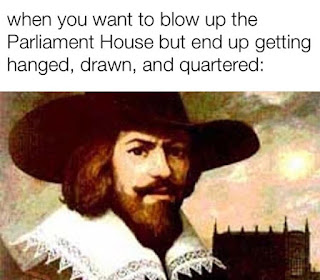 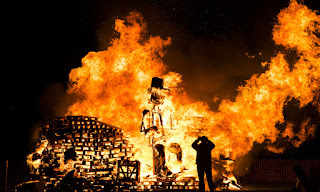 Posted by peter mccandless at 17:47