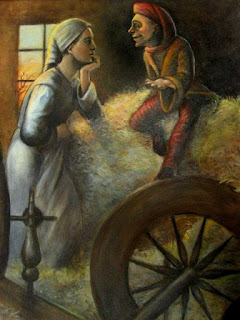 Once upon a time there was a poor stockbroker named Jack Hammer. He was poor because he was a terrible predictor of stock futures. Verging on bankruptcy, he decided to employ his most valuable asset: his beautiful and intelligent daughter.
One day at a brokers' meeting, he bragged to everyone that his daughter’s investment predictions were amazingly accurate.
Most of the brokers laughed and ignored him, given his record of stock predictions. But one man there did not: the Chairman of the Brokers’ Association. He came over and grabbed Hammer by the lapels of his jacket.
“I would like to put your daughter's ability to the test. Bring her to my mansion tomorrow." He winked. "I wouldn’t want anything bad to happen to such a nice girl.”

Hammer hurried home, cursing himself. His daughter was smart and had marvellous boobs, but knew nothing about predicting stock futures.
She was horrified at his news. “This is insane! What am I going to do?" she asked, polishing her nails. "I don't know anything about this stuff.”
Her father tried to calm her. “Just do your best. The worst thing the Chairman will do is fire you. He loves firing people.” Hammer feared something worse but decided to keep that to himself.

When the girl arrived at the Chairman’s gilded mansion, a servant led her to a room. It contained a bed and a desk. Behind the desk sat the leering Chairman, a porky man with a weird orange cast to his face, as if he had washed it in Cheetos. He sported a very long red tie.

He pointed to a pile of papers on the desk. “Rank these 10 stock prospectuses from first to worst. You have until tomorrow morning. If you get it right, I'll keep you on. If you get it wrong, you'll be fired.”
Relieved, the girl replied, “I know. My Dad told me that.” The Chairman laughed. “I guess he didn’t tell you that here fired means fried, barbecued.”

He went out and locked her in the room. She looked around the room. Another door led to a bathroom featuring a golden toilet. Returning to the desk, she picked up the first prospectus. It was written in a language only brokers and investment lawyers would understand, the better to fleece the sheeple.
She threw it down and began to cry. Just then, the door opened, and a little man entered. He looked like a Keebler Elf, but much less cute and far more chubby. In fact, he looked like a Mini-Me of the Chairman, from his strange orange glow to his tiny hands. The small man doffed his red cap, and bowed. “Good evening, young lady. Why do you weep so?”

She stifled a sob, pointing to the pile of reports. “I’ve got to rank these prospectuses from worst to first, or the Chairman will roast me. And I don’t know anything about stocks.”

“No worries, my dear. I can help you. I know more than anybody about everything. But what will you give me if I succeed in saving you from the Chairman’s barbecue?”

“I will let you kiss me,” the girl said with modest reluctance. The little man looked downcast. “Only first base? OK, it’s a start.” He went over to the pile of prospectuses and began looking through them. Within minutes he had arranged them in what he said was the correct order. He bowed and grinned. “I’ll be back for my reward tomorrow,” he said, and left.

The next morning at the crack of dawn, as the girl slept, the Chairman entered the room. He grabbed up the prospectuses wordlessly and left. About half an hour later, he returned, and woke the girl. He had a glint in his eye. “My dear, you’re a genius at this. An astonishing performance.”

“Can I go home now?” the girl asked. “Home? Not yet, my pretty. I have another test for you.” He led her into another room, filled with piles of prospectuses.  “Rank these in the correct order by morning. Only 100. Piece of cake for you, I bet.”

The Chairman left. The girl began to cry, and cry, and cry. Her tears had almost soaked the prospectuses when she felt a tug on her sleeve. The little man in the red cap dried her tears and kissed her.
“Now, my precious, would you like some help with this task?”  She nodded. “What will be my reward?” “Second base,” she said, drying her tears. The little man finished the task in no time at all and left.

The next morning the result was the same. The Chairman praised her brilliance, but said he had another test for her. “A mere 1000 this time, my precious.” That night the little man came again, and collected his reward. The girl begged for his help and promised him third base.

All went well again, but as you can guess, the greedy Chairman insisted on another test: 10,000 prospectuses. If she succeeded, he said, he would make her his wife.

“But you’re already married,” she said. He laughed. “No problemo, my dear. You can be my mistress until I get rid of her -- a few million for a divorce settlement will do the job. You know how these immigrant women are. And I'll deduct the pay-out from my taxes.”
Before the girl could reply, the Chairman left. She began to cry again, a veritable flood. The little man soon appeared and collected his third base reward. "I'll help you one last time," he said, "but only in return for a home run." The girl hesitated. After all, she valued her honour. She began to cry again.
The little man stamped his foot impatiently. He took some pity on her. “OK, he said, I’ll do this task for you. After that you’ll have three chances to guess my name. If you fail, you must reward me with a home run.” The girl hesitated, thought about roasting on the Chairman’s grill, and agreed.

When the Chairman checked the girl’s results the next morning, he repeated his usual praise. “I’m off to file the divorce papers now," he said, and pecked her on the cheek.

That night the little man returned as promised. He put his tiny hands on his rather broad hips. “Well, what is my name?” The girl went through every name she could think of, from Aaron to Zachariah. “Not my name,” the little man said each time, and left.

The next day the girl begged the Chairman’s permission to go out shopping, for lingerie. “Of course, my sweet, but you must come back, or I’ll roast your father." She headed straight for a local bookshop to get a book of names. You know, the kind prospective parents get.

While she was perusing one of these books, a handsome young clerk sauntered up and asked if he could help her. She could tell immediately that he was the empathetic type, because the next thing he said was, “I have a degree in the humanities.”

She explained her difficulty. His face clouded in outrage. “Don’t worry. I have a cunning plan,” he said. He explained it to the girl, who smiled and nodded. When the little man returned that night, she read out every name in the book. “Not my name” he said to each and left.

The third night, the little man appeared again, wearing a triumphant, lusty grin. “This is your last chance. What’s my name?” The girl replied, “Barrington?” The little man laughed. “Not my name.” The girl smiled. “Well, how about Trumpelstiltskin?”

The little man's orange face turned red with anger. He stomped up and down. “You cheated, you harlot. How did you find out? The devil must have told you, or Nancy Pelosi.” At this point, a closet door opened with a loud creak.

The handsome young man stepped into the room, holding a gun. “I’ve been on to you for some time, you disgusting piece of slime. I may work at the bookstore, but that’s a clever disguise. I’m actually Dick Spacy, a private dick. I was hired by some of your previous victims. When this young lady told me her story, I knew I had you. One of my assistants followed you yesterday. He heard you singing that silly song about baking and brewing, and rejoicing that no one knew your name. But you made a fatal mistake. You foolishly revealed your name at the end of the song. By the way, that song won’t make the Top 40.”

While the young man expounded on his brilliance, he failed to notice that Trumpelstiltskin had moved closer to the young girl. With a lightning movement, Mr. T grabbed her left arm and pulled her in front of him, so that her posterior faced the young man. An astute move. It left Dick staring helplessly at that dazzling part of her anatomy. But the little fellow forgot about her other arm. The girl raised it above his head. It was holding a hammer. With amazing force, she brought it down on his skull. It cracked open like a poorly made knockoff Faberge egg. He dropped into a pool of blood.

As Dick and the girl checked to see that Trumpelstiltskin was down for good, the room door opened, revealing the portly frame of the Chairman. He looked at the body on the floor. “Villains! You have killed the second greatest genius in human history! Next to me, of course.”

“But he was using you to get his way with this girl,” Dick said.

“Balderdash! We were working together on this caper. We arranged this whole thing. I didn’t give a junk bond about her predictive skill, which was non-existent. I was after something else." He pointed to the corpse. "So was he. Poor fellow. He should’ve stuck to call girls."
“And you dare call us villains!” Dick said. He stepped forward to grab the Chairman by the throat. But he slipped on the blood on the floor and stumbled to his knees. The Chairman grabbed a poker from the fireplace and raised it to hit Dick. As he did so, a hammer whistled through the air, followed by a loud crack. The Chairman fell forward, noiselessly, landing on Mr. T.
Dick got up, fixed his hair, and hugged the girl. “Mission accomplished. I saved you from these villains, as I promised.” He pointed toward the bed. “Now it’s time for my reward.” As he moved toward the bed, the hammer came up and down again. Dick crumpled and fell to the floor.

The girl surveyed the bloody scene with more satisfaction than the circumstances called for. She turned towards the audience.* “I know you’ve been dying to know my name. I'm not called Armanda Hammer for nothing."

*NB. I forgot to mention that this was a play. 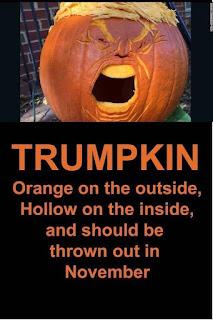 Posted by peter mccandless at 12:46