Comparing Pandemics: Coronavirus and the Great Influenza of 1918-19: Updated 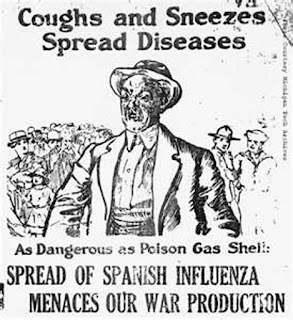 The coronavirus pandemic is often compared to the so-called Spanish Flu of 1918-20. There are good reasons for this. The Great Influenza of 1918-19, as it is now usually called, killed between 50-100 million worldwide. No disease outbreak since then has had such catastrophic effects in terms of numbers of people and countries affected. The similarities are much greater than the differences.


·   Both diseases spread around the globe with incredible speed. In 1918, World War helped the spread, especially with millions of soldiers being crowded together on troop ships, trains, barracks, and trenches. The flu infected about ½ of the world’s population in about a year. So far, Covid-19 has not infected so many, but it may be early days yet.


·    Both appear to have similar case mortality rates, between 1-3%, about ten times higher than seasonal flu. The great majority of the infected in 1918-19, about 80%, recovered after a week to 10 days, though many suffered lingering weakness for weeks or months. Those who did not recover within a week or so often developed severe pneumonia, the main cause of death.  Coronavirus seems to follow a similar pattern.


·  In both pandemics, the official mortality statistics were/are too low. For various reasons, many flu deaths were not recorded, not recorded until much later, or never recorded. The same has been happening with coronavirus. That is partly because of technical and human problems. It is also because underreporting deaths suited some authorities and political leaders, then as now.


·  Both strained health systems to their limits and beyond. Hospitals ran out of beds and medical supplies. Other buildings were converted into temporary hospitals and tent hospitals were set up in the open air. People wore masks to prevent being infected or spreading the disease, with debatable results. 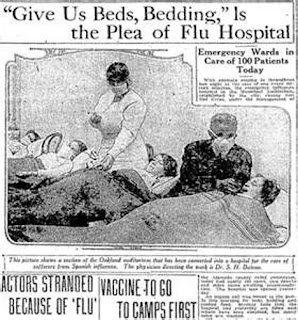 ·       Both led to the closing of many institutions and businesses: schools, large shops, churches, theatres, and dance halls. Both produced similar sorts of advice: avoid crowds, keep your distance from others, wash your hands regularly, wear masks, avoid touching your face or mouth. In both, quarantine and other isolating measures were inconsistent and produced protests. The measures were often lifted at the worst possible time, leading to a surge in cases and deaths.


·  Both expanded opportunities for charlatans peddling useless or dangerous remedies. (Think Trump) Familiar products were proclaimed to protect one against the disease, like disinfectants.

Both had severe effects on economies. This is a bit tricky for the Great Influenza because the First World War was nearing its close and it had already produced catastrophic effects on world trade. The influenza made things worse by closing down many businesses for weeks or months. The US recovered fairly quickly. Many other countries did not. The economic effects of Covid-19 may be even worse, but we won’t know for some time..


·  Both produced wacky explanations for the outbreaks: In 1918-19, the flu was blamed on cosmic influences, strange weather, electricity, German U-boats spreading the germs, and dirty pajamas.  In 2020, the 5G network is one of the wackier explanations, along with Bill Gates and Dr. Fauci. And, of course "God's Wrath."


·       Unlike coronavirus, the 1918-19 flu killed younger people at a much higher rate than the old. The highest death rates were among people aged 15-44. About half the deaths occurred within this age cohort, who generally possessed the strongest immune systems. In the case of coronavirus, people over 60 and people with compromised immune systems are more vulnerable.


·  The virus causing Covid-19 was quickly identified, within weeks of the outbreak. The virus causing the Great Influenza was not identified until decades later. Some scientists speculated that the culprit might be a virus, but at that time, no one had ever seen a virus. No one would until much more powerful electron microscopes were developed around 1930. Most experts believed the cause was bacterial. Several vaccines were developed but all were useless.


·  One of the most tragic consequences of the Great Flu was the extremely high mortality among some isolated ethnic groups. In Samoa, about 25% of the population died, a proportion similar to that of the Black Death of the mid-14th century. Some Inuit and Eskimo communities in Canada and Alaska were wiped out or lost all their adult members. In 2020, there are fears that isolated populations may experience the same kind of losses. That has not happened so far, perhaps because the world contains fewer isolated populations. 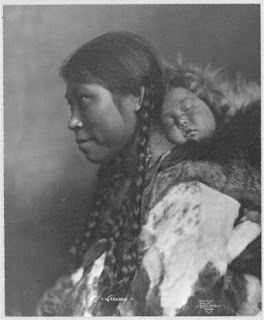