America's Last King was no Tyrant

The July 4th holiday in the US always produces some reflections on America's last king, George III. Most of them celebrate the overthrow of a tyrant, and a mad tyrant at that. In recent years, such denunciations of King George were often connected to a desire to get rid of the current occupant of the White House. "We removed the tyrant King George in 1776 and we'll get rid of tyrant Trump as well."

While I would dearly love to see the back of Trump, as a historian of Georgian Britain, I reject the claim that George III was a tyrant. Trump is incomparably worse as a leader and a man than King George was. The king had his flaws but an urge to despotism was not one of them. He was not a narcissistic sociopath. He remained faithful to Queen Charlotte, his wife of 60 years and mother of his 15 children, poor lady. Unlike most monarchs, he never took a mistress.

George III considered himself a constitutional monarch and took his job seriously. He venerated the (unwritten) British constitution. Unlike Trump, he understood his country's constitution. His father, Frederick, Prince of Wales, ensured he had a solid education in a wide array of subjects, including  politics and constitutional law. As early as age eight George could discuss current politics in speech and writing, in both English and German. He also learned French and Latin. He was the first British monarch to be thoroughly educated in science.

As king, he was a strong supporter of the sciences and  arts. He gave a large portion of his income to charity. He amassed a library of more than 65,000 volumes, and the collection was open to scholars of the day, including Samuel Johnson and Joseph Priestley. The collection is now part of the British Library.

Frederick, who died before his father George II, prepared his son George to be a "Patriot King," ruling in the interests of his people. Frederick believed that the Hanoverian dynasty needed to improve its image, and he passed that belief on to his son. Neither George I nor George II, the first two Hanoverian kings, was popular. They preferred their native Hanover to England and spent long periods of time there. Many British people referred to both of them as "German George."

In contrast, George III was born in Great Britain and considered himself British. At his coronation in 1761, he made much of the fact. "Born and educated in this country, I glory in the name of Britain." He made it clear that Britain and its prosperity would be his first concern. He spent his entire life of 82 years in England. (Image: George as Prince of Wales, by Jean Etienne Liotard, 1754) 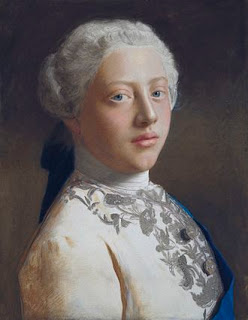 Initially, George III had little to do with the actions that angered the American colonists. They were devised by the king's ministers and approved by Parliament. The king opposed some of them, notably the Stamp Act of 1765. Part of that was personal. He detested the architect of the Stamp Act, Prime Minister George Grenville.
In 1766, George was able to push Grenville out. His successor, Lord Rockingham, repealed the act with the help of the king and the popular William Pitt. The king's efforts were applauded in the colonies. New York City erected a statue in his honor.

In the following year, Parliament re-asserted its right to tax the American colonies. The furor the taxes (Townshend Duties) produced led to all but a tiny tax on tea being repealed. Leaving the tea tax in place was intended to maintain the principle that Parliament could levy taxes on the colonies. (Image: George III by Johan Zoffany, 1771) 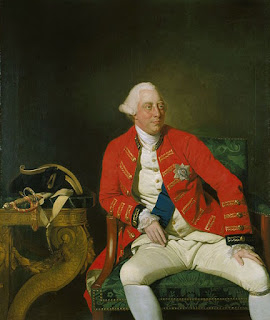 The king supported Parliament's right to tax the colonies. But it was Parliament's right, not his. After the Civil War of the 1640s, British monarchs could not levy taxes. That was Parliament's prerogative. The Declaration of Independence essentially blames George III rather than Parliament for the conflict that followed, probably because it was simpler than explaining the intricacies of British politics.

The Declaration listed 27 grievances against the British government. Many of them began each of them with "He has...", personalizing the conflict into one of the people versus an overbearing king. It is worth noting here that as many as half of the colonists were Loyalists who supported the king's government during the war.

George III was no warmonger. One of his first actions as king had been to bring an end to the Seven Years' War with France and Spain at a time when Britain was winning victories everywhere. But once the American war had begun he was determined that it end in a British victory. He obstinately continued to support the war even after the disastrous British defeat at Yorktown (Oct. 1781), when most of his ministers urged him to give up. He did give up a few months later and authorized peace negotiations.

Once independence was conceded, he became resigned to the new relationship with the former colonies. In 1785 he told John Adams, the first American ambassador to Britain, "I was the last consent to the separation; but the separation having been made ... I have always said, as I say now, I would be the first to meet the friendship of the United States as an independent power."

George III is often referred to as Mad King George, and people persist in connecting his loss of America to insanity. The problem with this view is that he showed no symptoms of mental illness before 1788, five years after American independence.

British rule in the colonies was often insensitive and infuriating. The frustrations were increased by the immense distance between Britain and America. But no colonies of the time were as loosely governed by an imperial country as the thirteen who declared independence in 1776. None were as prosperous.
The timing of the revolution had more to do with the removal of the French threat from North America in 1763 than any actions of the British government. Before then, the colonists felt the need for British protection. After then, they didn't. That emboldened them to push for change in the relationship between mother country and themselves. British actions exacerbated an already difficult situation.
The change to independent status can be justified, but explaining it as the result of the tyranny of George III is misplaced.  He was no angel. He opposed the abolition of the slave trade. But many of his American critics stood on the same low moral ground.
In 1785, an American Quaker, Hannah Griffits, provided an interesting perspective on the results of the revolution:
The glorious fourth -- again appears
A day of days -- and year of years
The sum of sad disasters
Where all the mighty gains we see
With all their boasted liberty
Is only change of masters.
(Image: George III by Allan Ramsay, 1762) 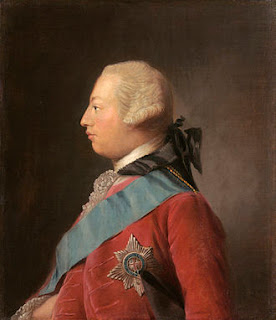