London’s Execution Dock: Captain Kidd and All That


On May 23, 1701, a formal procession escorted a forlorn prisoner from the Marshalsea Prison in Southwark to London Bridge. After crossing the bridge, they turned right and marched along the north bank of the Thames to the bustling port area of Wapping, a land of docks, wharves, warehouses, shops, inns, and "other houses" catering to needs of ships and sailors.

The procession's destination was Execution Dock. Their mission was to hang the prisoner, the pirate Captain Kidd. Historians may disagree about the justice of Kidd’s conviction, but no one doubts how he exited the world. From the scaffold he made a long and rambling speech protesting his innocence. The prison chaplain attributed his words to being "inflamed with drink," which had made his mind "unfit for the great work, now or never to be performed by him." When Kidd was pushed off the scaffold the rope broke and he fell to the ground still conscious. The chaplain rejoiced at this second opportunity to exhort Kidd to repentance, and claimed to have succeeded. Kidd was launched into eternity a second time. This time the rope held.

Kidd may have been the most famous pirate executed at Wapping, but he was far from the only one. Hundreds of others, mostly forgotten, shared the same fate over the four centuries of Execution Dock's existence. (Image: William Kidd) 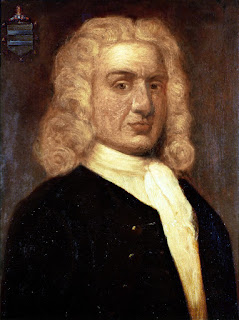 The gallows was erected on the shore close to the low-tide mark. This location was chosen to emphasize that the pirates' crimes were committed under the jurisdiction of the Lord High Admiral. After pirates were hung, they were left to be submerged by the incoming tide, then reappear in ghoulish fashion, for several tidal periods. (Image: Execution Dock, Rotherhithe, with St. Mary's Church in background) 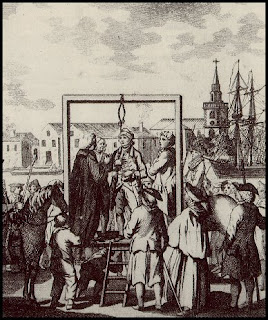 The bodies were generally removed after three tides. Some were buried in an unmarked grave. Many were sent for dissection at Surgeon's Hall. Notorious pirates were often displayed in chains in a metal harness or cage, their bodies covered in tar to preserve them as long as possible. Kidd was displayed on a gibbet at Tilbury Point on the lower reaches of the Thames, where his body would have been viewed by thousands of sailors on ships plying the river. (Image: Kidd's body hanging in chains at Tilbury) 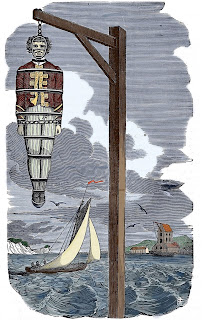 The peak of pirate activity in Atlantic waters occurred years after Kidd's execution, between about 1714 and 1726. During that period over 400 people were hanged for piracy. It became common practice to hang scores of pirates at a time, often whole crews, as a deterrent. Some would be spared if they could prove that they were coerced into joining the pirates.

Mass hangings often took place in colonial locations. In Charleston, South Carolina in 1718, Stede Bonnet , "the Gentleman Pirate," was hanged at low tide along with 34 of his crew. In 1723, Bartholmew Roberts and 54 of his crew were hanged at Cape Coast Castle on the coast of West Africa. Though less well known today than Kidd or the infamous Blackbeard, who once held Charleston, South Carolina to ransom, "Black Bart" Roberts was the most successful of all the pirates in terms of numbers of prizes he captured.

The exact location of London's Execution Dock remains a matter of debate. Different authors locate it at several points along Wapping's shore, somewhere between two old pubs, The Prospect of Whitby and The Town of Ramsgate. In between them another pub claims to be the true location. It is aptly named The Captain Kidd. All of the pubs are excellent locations for sitting with a drink and ruminating on the time, not so long ago, when Execution Dock was in "full swing." (Image: The Prospect of Whitby) 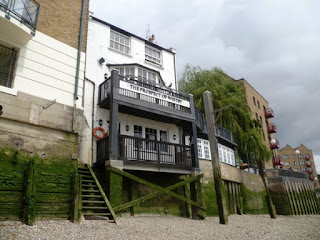 Further Reading: David Cordingly, Under the Black Flag: The Romance and Reality of Life Among the Pirates (1996)
Posted by peter mccandless at 19:27