Bedlam! London's Bethlem Hospital and the Word it gave us.

In our language today, "bedlam" usually means a scene of mad and noisy confusion. It was once a common or generic term for a madhouse. The word "bedlam" derives from an institution with a very long history, London's Bethlem Hospital. It was originally a medieval monastic foundation, the Hospital of St. Mary of Bethlehem, founded in 1247 to care for sick paupers. By the 15th century at the latest, it was specializing in the care of "mad" people and the name had become corrupted to Bethlem, or Bedlam.

When Henry VIII dissolved the monasteries in the 1530's, he gave Bethlem to London, and it became a public hospital. By the 17th century, the original building had become inadequate and the city replaced it with a new structure at Moorfields, just outside the walls. The image below is of this second Bedlam, opened in 1676. 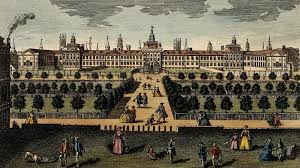 During the 18th century, Bedlam became a popular attraction. People could visit on certain days, to see the "lunatics." Some histories claim that the public came to stare at and cruelly taunt the patients. Others argue that the public openness brought in money and helped prevent mistreatment.

In the 1730's, William Hogarth famously depicted a scene in Bedlam in his didactic series, "The Rake's Progress." The rake, who has gone mad as a result of debauchery and debt, is shown at the center, naked, raving, with his head shaved. He is surrounded by stock caricatures of lunatics, including religious maniacs, megalomaniacs, melancholics, and would be popes and kings. 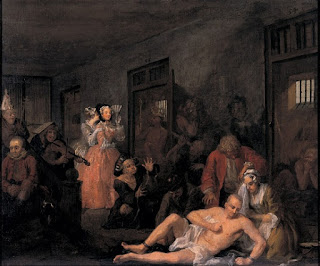 Public visits were banned in the late 18th century. In the following decades, the building deteriorated badly, and a parliamentary investigation in 1814-15 revealed scandalous conditions. Patients were often filthy and ragged, sometimes beaten and chained up. One patient, James Norris, an American sailor who had been chained to a wall in a metal harness for years, became an icon of a reform movement that was gathering pace by the early 19th century. 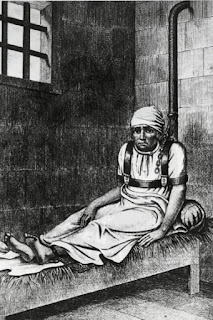 The movement was inspired by advocates of what became known as "moral treatment, or "moral therapy." One of the most effective spokesmen for moral treatment was a French doctor, Philippe Pinel, who has been immortalized in a famous, if romanticized, painting.
It shows Pinel ordering the chains removed from women patients at the Salpetriere Hospital in Paris in the early 1790's. Pinel's methods became widely known after he published his Treatise on Insanity in 1806. 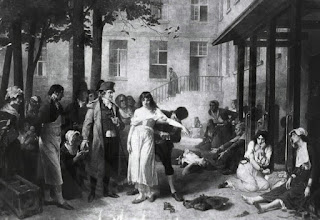 Another important inspiration for "lunacy reformers" came from an English institution, the Retreat, near York. The Retreat, opened in 1796, was the idea of a Quaker tea merchant, William Tuke, disturbed by mistreatment of patients at the nearby York Asylum. The Retreat adopted the principles of moral treatment and soon became world famous, especially after Tuke's grandson Samuel published A Description of the Retreat in 1813. Below is an early image of The Retreat. 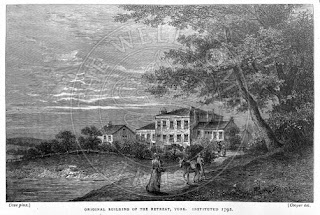 Moral treatment was essentially a psychological therapy. The idea was that the mad retained a modicum of reason and human instincts and could best be managed -- and often cured -- by appealing to their feelings or emotions and their desire for acceptance.

Promoters of moral therapy downplayed the use of medical therapies, which often involved bleeding and harsh purgatives. They denounced physical punishments, chains and low diet for "maniacs," which often bordered on starvation. Kind treatment, they argued, was more effective in "managing" patients.

At the Retreat, the patients were informed that they were part of a family, and the routines were designed to imitate family life as much as possible. Patients were encouraged to help in cleaning, gardening, and other work.

Moral therapists did not abandon all means of coercion and control. A controlled order was essential to the system. Moral therapy sometimes involved the revoking of privileges, isolation, and mechanical restraint for unacceptable behavior. And above all, the patients were institutionalized, sometimes for many years.

The reformers who investigated Bethlem Hospital in 1815 were aware of the work of Pinel, the Tukes, and other examples of moral treatment. Their reports to Parliament led to the building of a new hospital south of the Thames at St. George's Fields. (below, c.1820) 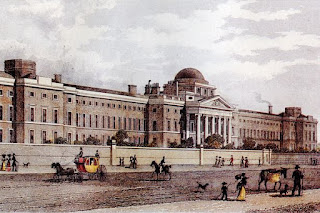 The new Bethlem gradually adopted many of the principles of moral treatment, or tried to. The same was true of the hundreds of public lunatic asylums (later renamed mental hospitals) established during the Victorian era. The system worked reasonably well in small institutions with adequate staff. Some asylums claimed to cure a high percentage of patients, as high as 90 percent. The claims were undoubtedly inflated, but in some cases, at least, the asylums functioned as refuges or retreats for the suffering.

But the institutions grew ever larger in the late 19th century, holding hundreds, even thousands of patients, many of them with chronic conditions the institutions could do little for. Costs soared. Those responsible for funding sought economies of scale that inevitably undermined the methods of moral treatment.

The following image, of Bethlem's men's gallery in the 1860's, illustrates the problem. It is clean, orderly, and bright. But the seemingly endless gallery, the barred windows, and the patients wandering about indicate that all is not well. 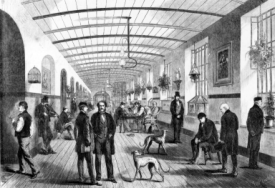 Conditions were often much worse elsewhere. Huge, underfunded asylums, despite the best efforts of many doctors and nurses, became warehouses where moral treatment became routine if applied at all. Individuals became lost in the mass. Many remained in the asylums for years, often for life. Scandals became common, with overuse of mechanical restraints, poor diet and sanitation, endless boredom, and sometimes abuse of patients.

In the late 20th century, most of the old asylums/mental hospitals closed down or were converted into acute, short stay institutions. Deinstitutionalization was encouraged by the development of new psychotic drugs, evidence of abuse of patients, and a desire to save money.

Advocates of deinstitutionalization, like those who promoted asylums, were hailed as reformers. Patients, they argued, could be better treated in the community, in a more natural setting than an institution. The results of "community care" have been mixed at best, often bedeviled by inadequate funding  A new crop of reformers now advocate a renewed attempt at creating therapeutic communities within hospitals.

Bethlem Hospital continues to treat and care for mentally ill and emotionally disturbed patients. It relocated to its current location near Beckenham, on the outer fringes of southeast London, in 1930.

And what of the old building at St. George's Fields? The wings were knocked down but the central part of the building remains. It has housed the Imperial War Museum since 1936. Appropriate, perhaps. 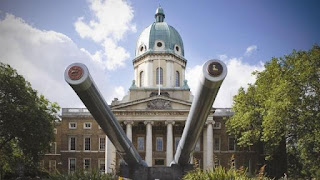 Posted by peter mccandless at 13:08