"We Have Conquered Infectious Disease!" Not. 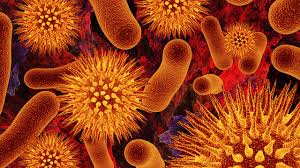 “We have conquered infectious disease!” This may sound like Donald Trump, but it wasn't. It was a Surgeon-General of the United States, Luther Terry, in 1964.

No one would make that claim today, except Trump and supporters in the case of coronavirus. Even if we discount the current pandemic of Covid-19, infectious disease is one of the greatest causes of death in the world, accounting for about 25% of deaths worldwide and over 60% of deaths among children.
But in 1964 the Surgeon-General's claim did not seem far fetched. Mortality from infectious disease had dropped sharply during the previous decades, at least in wealthy countries, and life expectancy had risen steeply, from about 50 to 75.

Many things contributed to the drop in deaths from infectious disease: better nutrition, clothing, and housing, improved sanitation and water supplies, vaccines, and antibiotics. Unfortunately, the drop was not uniform throughout the world:  poorer nations did not see the huge gains in life-span that richer ones did.

But even in the richer nations, the claimed “conquest of infectious disease” began to look like wishful thinking by the late 1970s and 1980s. New or newly recognized infectious diseases appeared, like AIDS, Legionnaires’ Disease, and Ebola, and old ones began to re-emerge, like TB, whooping cough, yellow fever, measles, and diphtheria.

New, more deadly strains of malaria, cholera, TB, and dengue fever emerged. Many of the new strains of bacterial disease were and are resistant to antibiotics, partly as a result of overuse and incorrect use of these lifesavers. Others were viral, for which antibiotics are useless.

Many of the deaths from infectious disease today, especially among infants and children, are the result of poor sanitation and water supplies. Ironically, we have known how to prevent these deaths for more than a century. It is lack of resources and will, not lack of knowledge, that is the problem.

But it is not always lack of money that produces poor results in terms of controlling infectious disease. The US, which spends far more than any other country on health care, lags well behind many other countries in terms of health care outcomes. The problem is that too many people cannot afford adequate medical care because they cannot pay the high premiums for private health insurance, or cannot get it at all.

Ironically, another US Surgeon-General, Rupert Blue of South Carolina, proposed a national health insurance system in 1911, a universal plan that would cover everyone. “Public health is a public utility,” he said. “We are our brother’s keeper.”

Perhaps Blue didn’t choose the best audience to deliver the message. He spoke to a convention of insurance executives. They made sure Blue's idea didn't become reality. A century later, the US remains the only developed country in the world without a system of national health insurance. Perhaps Blue was just a century or so ahead of his time -- in the case of the USA, that is.

Changing that by itself would not conquer infectious disease, but it would help combat it, especially if combined with an effective program of preventive medicine, which the USA also lacks. It would also go far to reduce anxiety about the costs of medical care in the minds of many millions of Americans. 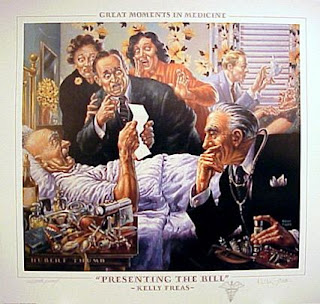 Posted by peter mccandless at 16:47