The Disease that Caused Slaves to Run Away: Drapetomania and other Delusions

In 1851, Dr. Samuel Cartwright of New Orleans claimed to have discovered mental or behavioral disorders "peculiar" to the enslaved black population. Cartwright, a strong advocate of slavery and a distinctive southern or "states rights" medicine, argued that blacks exhibited diseases and conditions that only a properly trained southern physician could detect and treat.

He named one of these diseases "drapetomania" -- the disease that caused slaves to run away. the chief diagnostic sign of the disorder, "absconding from service," was familiar to planters and overseers. 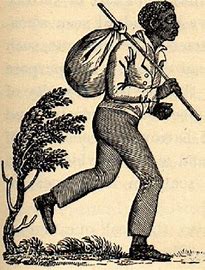 Unfortunately, many medical men, mostly from the North, had not paid enough attention to the peculiar diseases of blacks. They refused to see drapetomania for what it was: a type of insanity. Enslaved blacks suffering from drapetomania had become so mad that they tried to escape from a position God had designed them to fill and in which they were "normally" happy.

Cartwright recommended a type of psychological treatment for drapetomania. To prevent or cure it, it was essential to elicit "awe and reverence" from the enslaved toward white men, their natural superiors.

Masters and overseers had to make them understand that their intended lot, decreed in the Bible, was submission. They should treat the slaves graciously, supply their physical needs, and protect them from abuse. But they should never treat a slave as an equal or allow him to be anything but a "submissive knee bender." [Below: Cartwright and a submissive knee bender.] 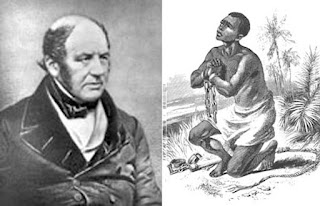 Slaves who exhibited restlessness in their position, who became "sulky and dissatisfied," Cartwright warned, were showing signs of developing drapetomania. The causes of dissatisfaction should be investigated and removed. If no cause could be detected, the best remedy was the traditional one of "whipping them out of it." I suspect many masters and overseers did not need this advice.  [Below: Abolitionist Image] 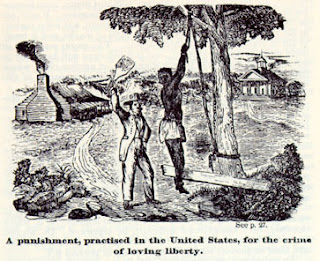 Cartwright "discovered" another type of mental illness peculiar to blacks. He called it "Dyaethesia Aethiopica, or Hebetude of Mind and Obtuse Sensibility of Body." Overseers, he said, knew it as "Rascality." I'll call it "DA" for short.

DA, Cartwright claimed, was more common among free blacks than slaves. Among slaves it was restricted to those whose masters allowed them too much liberty. Black freedom was the cause of the disorder and curtailing it was the cure.

The signs of DA included mental lethargy and a partial loss of sensibility in the skin. The sufferers tended to do a lot of mischief that seemed intentional but was due mainly "to the stupidity of mind and insensibility of the nerves induced by the disease."

Victims were liable "to break, waste and destroy everything they handle." They "tear, burn, and rend their own clothing, and paying no attention to the rights of property, steal others, to replace what they have destroyed. They slight their work.... They raise disturbances with their overseers and fellow servants without cause or motive, and seem to be insensible to pain when subjected to punishment."

Cartwright conceded that northern physicians had observed the signs and symptoms of DA but had incorrectly attributed them to slavery. They ignored their greater prevalence among blacks who had been free for generations. DA was "the natural offspring of negro liberty -- the liberty to be idle, wallow in filth, and to indulge in improper food and drinks."

DA could also be easily cured "if treated on sound psychological principles." The main requirement was to stimulate the skin, which was "dry, thick. and harsh to the touch," and the liver, which was inactive. The "patient" should be scrubbed with warm water and soap, then covered in oil, which should be slapped in with "a broad leather strap." Slapped here looks like euphemism for "whipped."

Next,  the "patient" should be required to do some hard work in the fresh air and sunshine, to force him to expand his lungs. After resting from labor, he should be fed "some good wholesome food, well-seasoned with spices and mixed with vegetables." After more work, rest, and lots of liquids, he should be washed and sent to a clean bed in a warm room. Repeating this treatment each day would quickly bring about a cure "in all cases that are not complicated by chronic visceral derangement."

Cartwright's descriptions shared the views of contemporary asylum doctors that many antisocial behaviors were the result of mental illness. As such, they should be treated, not punished. For Cartwright, whipping was not punishment but a necessary means of restoring the proper order of things and thus good for the slave as well as the master. It was in fact, "humane."

Similarly, Cartwright's therapies for DA did not differ in some respects from those experienced by patients in contemporary lunatic asylums. They also emphasized work in the fresh air, good diet, bathing, and rest. (Note: asylum doctors no longer considered whipping to be therapeutic or acceptable by the 19th century).

The difference is that Cartwright's descriptions and prescriptions were embedded in a world view that accepted slavery as a natural, God-given institution, however "peculiar." They were part of what historians have called The Proslavery Argument and what today is often called "scientific racism." In short, they were a delusional, perverse reaction to a natural human desire.

Posted by peter mccandless at 18:03