The Logical Fallacy Behind Anti-Vaccine Claims 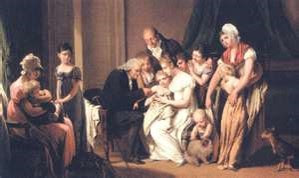 The first was the religious argument: injecting something into the body to prevent disease interfered with Providence, with God's power to decide whether to inflict a disease or not. If God's anger brought the punishment of epidemic disease, the proper response was to placate Him with prayer, repentance, and sacrifice. What God had sent he could remove, if people showed true repentance.

The second argument was medical: inoculation/vaccination was dangerous and /or useless. It might bring serious harm or even death, and all to prevent a disease one might never get. Better to take one's chances and rely on medicine to cure or relieve the sickness if infected.

Both arguments recur in the dialogue over disease today. The religious argument retains strength among followers of certain sects and mindsets. "God made me, and he will protect and preserve me," they will say, ad nauseum.

The medical argument that vaccines are dangerous is probably more powerful today because its proclaimers include the unchurched and secularists. Today, a major part of this argument is based on anecdotal evidence, often second or third hand.

Here is an example, a comment on my arguments in this blog for getting vaccinated for Covid-19: "I lost two uncles, twin boys aged five to the smallpox vaccine, a requirement to get coming into the US through Ellis Island. The year was 1903."

I think we can agree that the writer was probably not around in 1903, so the story must have been handed down in the family over two or three generations. It may have become embellished in the retelling. But that is not the real problem.

Here's an anecdote of my own: My family emigrated from Scotland to the USA in 1952. I was six years old. We also had to get vaccinated for smallpox to be allowed entry. Five of us were vaccinated. None of us died, got smallpox, or any other disease or complication.

Which of these two anecdotes is useful from an epidemiological or  public health point of view? Neither. They are merely isolated incidents, and the first may have become distorted over time. Also, we have no evidence that the smallpox vaccine was responsible for the deaths of these two unfortunate lads. Maybe the cause of death was something else entirely.

The writer's anecdote is an example of a logical fallacy that has bedevilled vaccines from the beginning: post hoc, ergo propter hoc (after this, because of this). This is the mistaken notion that just because one event follows another, that the first caused the second.

This fallacious reasoning is the at the root of untold numbers of erroneous beliefs. An example is medical remedies: "I had an upset stomach. I drank a concoction of powdered dog poo and it cured me. Believe me, it works."

If I told you that, you probably wouldn't believe me. The idea of drinking powdered dog poo is repulsive to most of us. Interestingly, anti-vaxxers have claimed that being vaccinated is like eating dog poo. 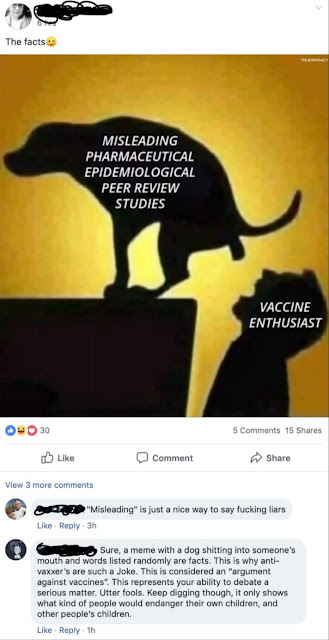 Historically, people have eaten/drunk such things and worse to cure what ailed them, including powdered flies, spiders, frogs, animal testicles, urine, etc. Urine is still popular. Some people were taking bleach for Covid not too long ago on the advice of Dr Trump.

The problem with this kind of post hoc reasoning is that two events constantly occur in sequence with having any causal relationship between them. To demonstrate causality in this kind of case, it is necessary to carry out carefully designed and implemented double-blind experiments, involving large numbers of subjects, human or animal. The experience of your uncles or my family isn't sufficient.

If I can just get a few thousand people to volunteer for such an experiment with dog poo, I can show that it is effective -- or not. What are my chances? 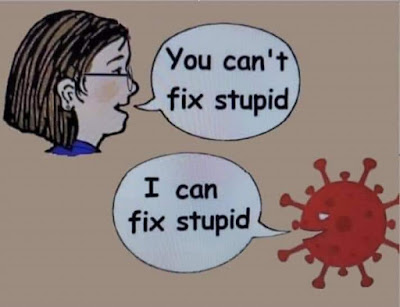 Posted by peter mccandless at 19:27