Smallpox and the First Vaccine: A Lesson for Our Covid Time

The greatest weapon human beings possess against infectious disease is vaccines. They are also one of the most cost-effective, because they prevent serious disease and therefore costly hospital and medical procedures.

This lesson needs to be hammered home repeatedly, because humans have short memories and short attention spans. They are also prey to charlatans peddling misinformation about medical procedures.
Vaccines have saved hundreds of millions of lives in our lifetimes alone. The new vaccines for Covid-19 are now promising to release us from our lockdowns as well. They may be the only hope beyond herd immunity, which will cost many millions of lives.
The terms "vaccine" and "vaccination" derive from the Latin "vacca" for cow. The reason is that the first effective vaccine used pus from a mild skin disease, the so-called cowpox, to immunize people against the deadly smallpox.
"Cowpox" was in fact horse-pox, which sometimes infected cows. Most people who got it worked with cows or horses.
The cartoon below by James Gillray, c. 1800, shows Edward Jenner, usually given credit for the procedure, vaccinating people, who are turning into cows. Although satire, the cartoon shows the fears the procedure aroused in many people. 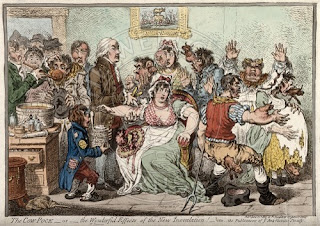 The use of the vaccine derived from observations that people who worked with cows and got "cowpox" never got smallpox. Jenner was not the first to use the procedure. A farmer, Benjamin Jesty, pictured below, had employed it about twenty years before. 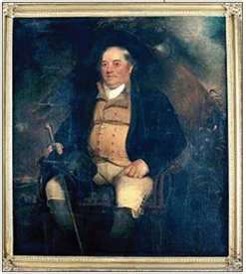 Jenner (below) was the first to publicize it and get credit, a knighthood, and a ton of money from Parliament. 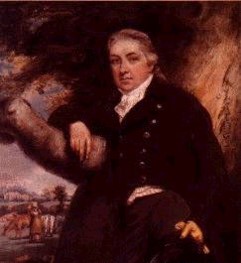 Before the use of "vaccine" an immunization using actual smallpox pus from human cases had been in use, in some places for centuries. Inoculation, or variolation, as it was called, was intended to induce a mild case of the disease and lifelong immunity. It was not always mild. It had a mortality rate of about 1% inoculated and it sometimes left ugly scars. Image below compares inoculation and vaccination effects on arms. 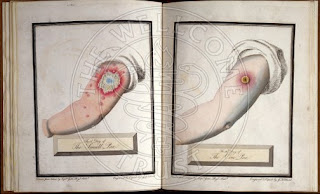 The natural disease, however, often killed 20% or more of the infected, which explains the attraction of inoculation, especially during epidemics. Its use had become widespread by the time Jenner popularized vaccination.
Vaccination was much safer than inoculation, but it was soon discovered that it did not provide lifelong immunity. Once that was understood, periodic re-vaccination became standard in the later 19th century. (Image below shows people being vaccinated in the US in 1870s.) 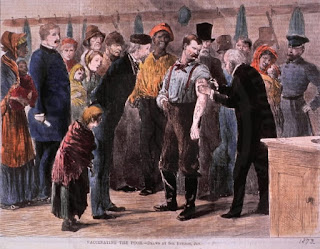 Public resistance to vaccination remained high in many countries for a long time. But access to it was a bigger problem, often because of cost or lack of health care infrastructure.
By 1979, a global vaccination campaign headed by WHO had eradicated smallpox, the greatest killer disease known to mankind. Its success had also led to the development of many other "vaccines." The polio vaccine has nearly eliminated that disease. Vaccines have many other diseases on the run.
The lesson: Get your jab!
Posted by peter mccandless at 15:44