In 1814, thousands of jolly British tourists descended upon the new American capitol in Washington, DC. Having just dispatched Napoleon Bonaparte to Elba after two decades of war, the British decided to celebrate and reward their soldiers and sailors by sending them on holiday to see the White House and the Capitol building. They were well armed but well intentioned, eager to do the new nation a well-deserved service.
They ransacked, looted, and burned the White House, and other buildings. "It was a great tour," one said. "I haven't had so much fun in years!" The sentiment was echoed by numerous others on the trip. Needless to say, they took away many souvenirs of their visit. [Image: British tourists enjoying their trip.] 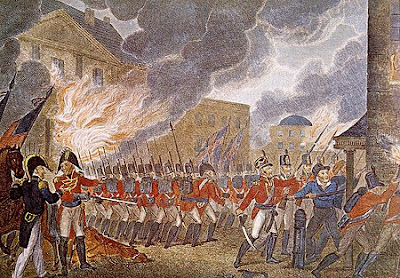 On January 6, 2021, American Trumpistas sought to repeat the British feat. The idea came from the fertile head of Donald J. (Jenius) Trump, who had recently been unelected as POTUS. He was thoroughly bummed to learn that the British had toured the capital with so much gusto, but not Americans.

The Trumpistas took the cue. And how! They beat up police. They broke windows. They smashed down doors. They chased the legislators and staff who fled in terror. In other words, they thoroughly enjoyed themselves. All in the name of patriotism.

Democrat sourpusses poured piss on the Trumpista celebration, as they do, by fussing about the damage to lives and property. When will the US capital learn to welcome tourists with proper charm and dignity? 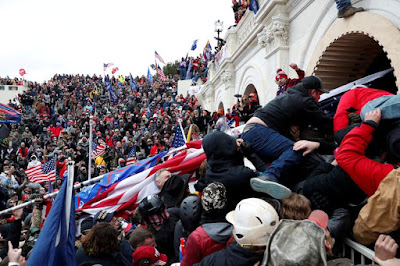 Posted by peter mccandless at 20:37