Victorian Christmas cartoons tended to lack the rough, sometimes raunchy humor and social satire of their Georgian predecessors. Victorian images of Christmas were more often sentimental, nostalgic, pious, and domestic. They focused primarily on the comfortably well off, and the holiday as a time of merry family celebration. Well behaved children were an important part of the scene. There were exceptions, as we shall see.

An example of the sentimental family scene is this Punch cartoon by John Leech (1817-1864), "A Family Group, Baby Stirring the Pudding." The large-headed Mr. Punch is at the center, helping "Baby," surrounded by admiring adults and children. 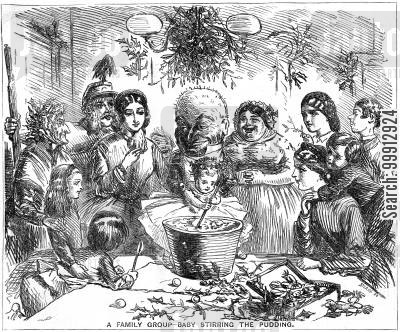 The 1840s saw several important developments in the creation of today's Christmas traditions. That decade saw the introduction of the first Christmas cards, by Henry Cole, a British civil servant. This one below, said to be the very first, shows a prosperous and respectable family enjoying a holiday meal. 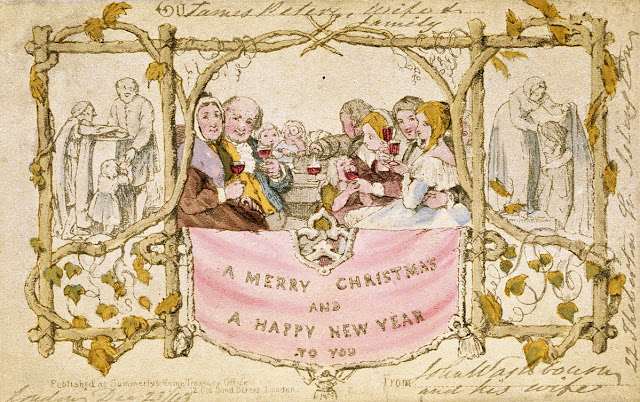 The publication of A Christmas Carol by Charles Dickens in 1843 helped reinforce the sentimental trend. John Leech's illustration of Mr. Fezziwig's Christmas party conveys a nostalgic view of the time when Ebenezer Scrooge was his young employee. The jolly, humane Fezziwig dances under the mistletoe in a room full of happy revelers. Dickens implies that this is how Christmas could be, or rather, should be. 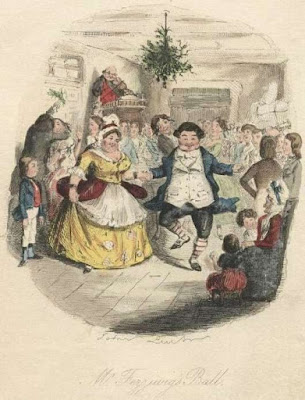 Fezziwig's party stands in sharp contrast to the Christmas day meal of the Cratchit family. The occasion is pious, sentimental, loving, but meager -- meager at least until the reformed Scrooge shows up with presents, a big turkey, trimmings, and a raise for Bob Cratchit. Now enlightened, Scrooge makes Christmas what it should be. 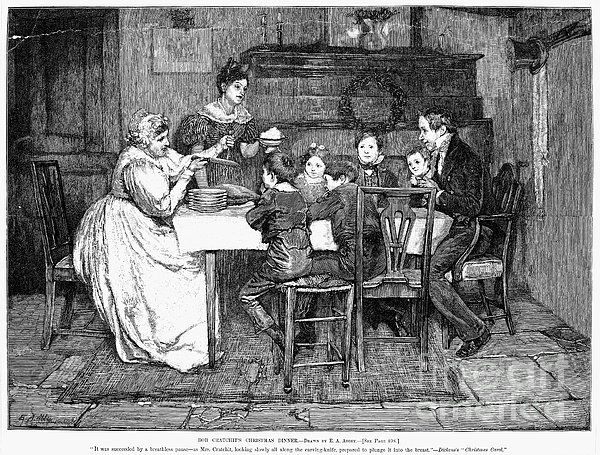 The decorated Christmas tree began to take front and center in portrayals of the holiday during the Victorian Age. The Hanoverian monarchs had introduced the Christmas tree from Germany in the 18th century. But few of the British adopted the German tradition until the reign of Queen Victoria. Illustrated magazines and newspapers helped popularize the practice to a wider public. An example shows Victoria, her consort Prince Albert, and their children surrounding and admiring a Christmas tree.

The Royals' Christmas dos did not always receive such positive portrayals. The 1840s was not only a time of the emergence of some modern Christmas traditions, but also of the Hungry Forties, great political and social unrest, the democratic movement known as Chartism, and the Irish Famine.

The cartoon below, from a radical newspaper, pictures the royals and company gorging themselves on a giant Christmas pudding, or "Blom Buddin" as Prince Albert calls it. Albert is presented as a freeloader helping himself the "good tings of Angland."

Victoria hands a plate of plum stones to John Bull, the "cook" of the pudding, and says he can lick the dish and suck the stones when the family have finished. Bull represents the people who have created the country's wealth but live on crumbs. 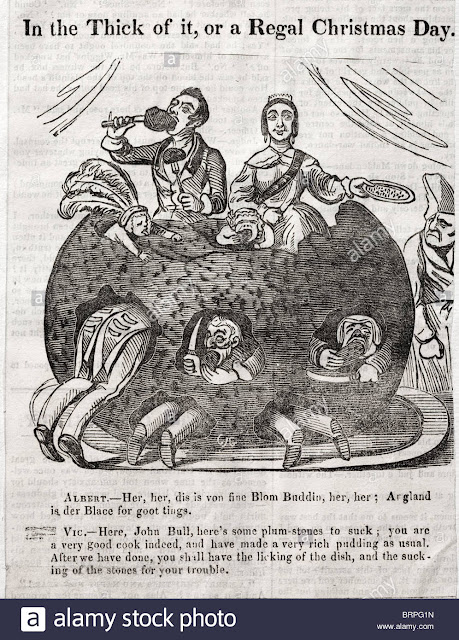 Victorian Christmas images, such as this one by John Tenniel from Punch in 1883, occasionally focused on those for whom the holiday was just another day of deprivation and poverty. Here, Father Christmas confronts a poorly dressed child who lives in a cellar and knows nothing about him.. "This must be altered," he says, presumably meaning such dire poverty as well as ignorance of the Great Present Giver. 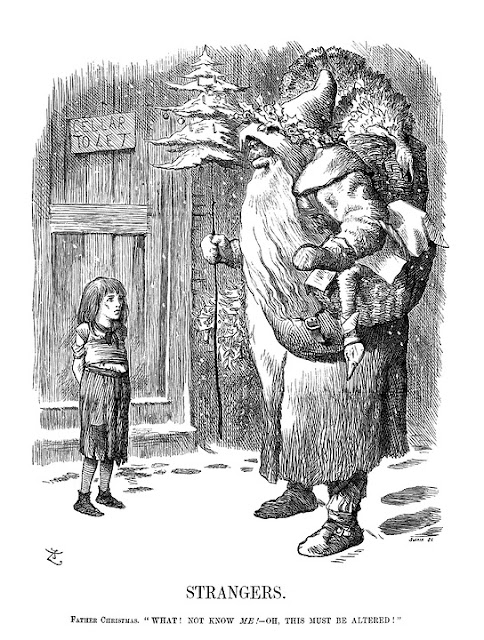 Some Christmas Cartoons could be positively frightening, in a humorous way, at least. An example is George Du Maurier's Christmas cartoon in Punch, 1865. The caption refers to a naturalist who says that children should not read fables and fairy tales but read natural history instead. "Here is the result [of reading natural history] on the youthful mind" Du Maurier comments, no doubt tongue-in-cheek. 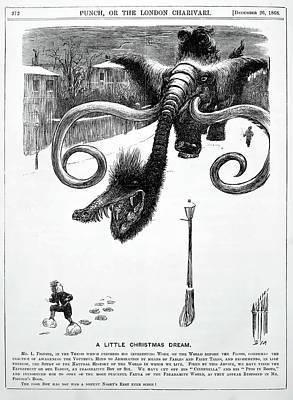 Posted by peter mccandless at 12:22