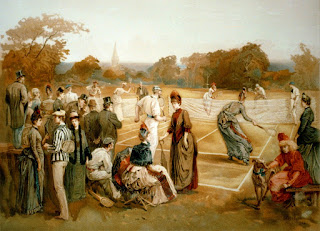 Lawn tennis evolved from a much older medieval game. Real tennis, as it is usually called nowadays, is played in indoor courts with walls the balls can be hit off of.[1] Originally, the balls were hit with the hand, first bare, then gloved. This gave it its French name, jeu de paume. Rackets replaced hands in the 16th century and sore hands gave way to sore elbows. 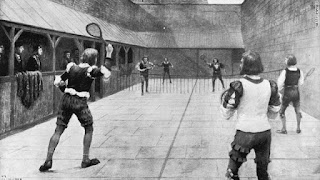 Real tennis was widely played in the “courts” of Europe, and it is still played in the UK and a few other countries. Several real tennis courts survive at Oxford, Cambridge, Hampton Court Palace and Falkland Palace in Scotland. Henry VIII and Mary Queen of Scots both loved the game. Legend has it that Henry was playing it at Hampton Court while Anne Boleyn was being executed. The image below is of the real tennis court at Falkland Palace in Fife, Scotland. 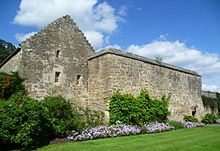 Real tennis probably originated in France, and it was in the royal tennis court at Versailles that one of the most pivotal events of the French Revolution occurred. When an angry Louis XVI ordered them locked out of their chamber during the meeting of the Estates-General in June 1789, representatives of the Third Estate moved to the nearby royal tennis court and took an oath not to disband until they had produced a constitution. The “Tennis Court Oath” was the effective beginning of the revolution. [Image: Jacques David, “The Oath of the Tennis Court” c. 1794] 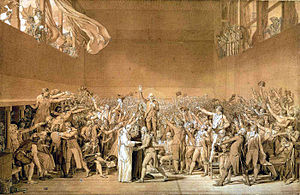 The man often credited with inventing lawn tennis was an Englishman, Major Walter Clopton Wingfield, but others in the UK and America had a hand in its creation. The first lawn tennis club opened in Leamington Spa in 1874. Wingfield patented an hourglass-shaped court and published a book of rules for lawn tennis in the same year. In 1875, the Marylebone Cricket Club drew up a slightly different set of rules which, with some changes, govern the sport today. Wingfield’s odd-shaped court did not catch on, either, being replaced by the rectangular court we know today. [Image: Wingfield’s hourglass court and his book of rules.] 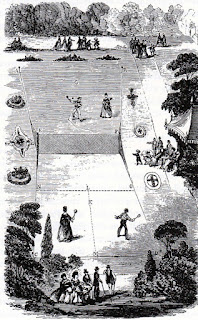 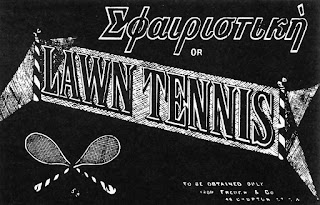 1875 proved an important year for lawn tennis in another way. A croquet club in Wimbledon, England, adopted lawn tennis as a second sport, setting aside one lawn for the new game. The Croquet Club  was founded by “six gentlemen” in 1868. The Wimbledon club held its first gentlemen’s singles championship in 1877 to raise funds. At the same time, it changed its name to the All England Croquet and Lawn Tennis Club. The first “Wimbledon” champion, Spencer Gore, was nonchalant about it all. “Lawn tennis,” he said, “will never rank among our great games.”

Great or not, the game soon became fashionable among the leisured and moneyed classes. Companies began to advertise equipment and outfits for playing tennis. As the ad below shows, the outfitters borrowed some fashions from existing sports such as boating, golf, and cricket. 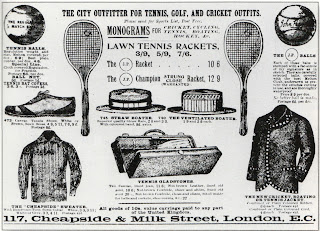 Despite the emphasis here on male attire, ladies also quickly took up the game. Playing tennis in long skirts on top of layers of petticoats, bustles, corsets, long drawers and stockings must have been a major challenge. 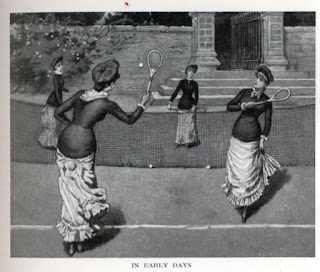 During the 1880s, lawn tennis had become the main focus of Wimbledon’s AELTC. In 1882, its members voted to drop “croquet” from the club’s name. In 1884, the Wimbledon club added ladies’ singles and gentlemen’s doubles championships. In 1913, the AELTC added ladies’ doubles and mixed doubles. International competition began in these early years. The US Open began in 1881, the French Open (now Roland Garros) in 1891, and the Australian Open in 1905. The Davis Cup, originally called The International Lawn Tennis Challenge, began in the late 1890's. The image below shows an International  Challenge match in Melbourne in 1912. 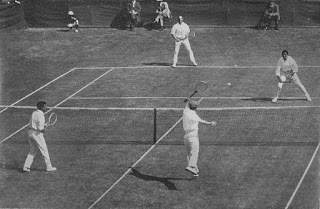 Lawn tennis might have really taken off at that point, if it hadn’t been for the outbreak of The Great War in 1914. For the next four years, many tennis countries were preoccupied by the military struggle. Amidst the appalling carnage, tennis competitions were halted.


On a less grim note, the war helped to change fashions, particularly for women. Petticoats, bustle and corset gave way to simpler, more comfortable modes of dress, using much less fabric, which was needed for military uniforms. The new fashion trends passed into women’s tennis attire. The French phenomenon Suzanne Lenglen paved the way at Wimbledon in the 1920s in a daring, some thought scandalous, outfit exposing her arms and a bit of thigh. 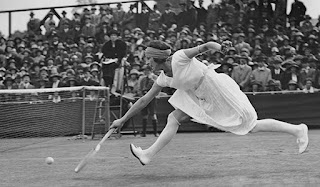 Women were quicker to adopt a new style of attire than men. Most of them continued to play in long trousers into the 1930s and beyond. In 1933, the UK's Bunny Austin became the first male player to appear on Wimbledon Centre Court in shorts, shocking at least some observers of the game.  [Valerie Warren, Tennis Fashions: Over 125 Years of Costume Change (Wimbledon, 2002] 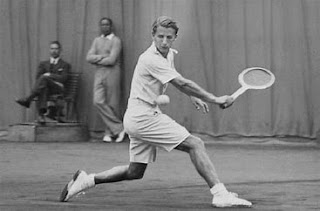 By the 1930's, lawn tennis had matured as a game and produced superlative athletes. It was no longer played only on lawns but was yet to produce mega incomes for the top players.


[1] The word “real” seems to imply that lawn tennis is artificial, but likely derives from the Spanish and Portuguese word for royal, “real.” It is often called "royal tennis" in the UK.

Posted by peter mccandless at 18:32