"The Atheist is Dying!" 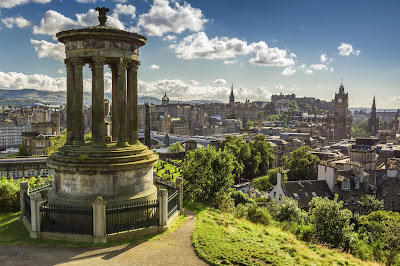 David Hume, for that was his name, was a genial, kindly man whose written works had made him many admirers and more enemies. One of the great philosophical skeptics, Hume had undermined many conventional beliefs, including the then popular "argument from design" used to prove God's existence.

In his Dialogues Concerning Natural Religion, he argued that it was just as likely that the world had been designed by many gods or none at all, by an incompetent god, an infant god, even an animal or vegetable god, as by the omnipotent deity of the Bible. There was no irrefutable evidence for any of these possibilities. (Image: David Hume, 1754, by Allan Ramsay) 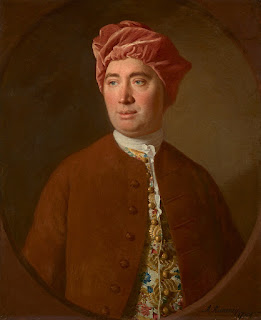 In suggesting the possibility that the world and its lifeforms could have been the result of accident rather than intelligent design, Hume anticipated Darwin's principle of natural selection.

Hume had aroused the ire of the Presbyterian clergy with his arguments against miracles, the afterlife, and the impossibility of proving the existence or nature of God. They had even considered bringing charges of infidelity against him.

Many modern critics claim that Hume was an agnostic but contemporaries considered him an atheist, or at least anti-Christian. He argued all religion arose from fear, "from a dread of the unknown." He declared that polytheism had some advantages over monotheism from a societal point of view.

He was fond of relating that "the best theologian he had ever met was an old Edinburgh fishwife who, having recognized him as Hume the atheist, refused to pull him out of the bog into which he had fallen until he declared he was a Christian and repeated the Lord's Prayer."

James Boswell, who later wrote the acclaimed Life of Dr. Johnson, visited Hume a few weeks before his death. The much younger Boswell recorded an account of their exchange. (Image: James Boswell, 1765, by George Willison) 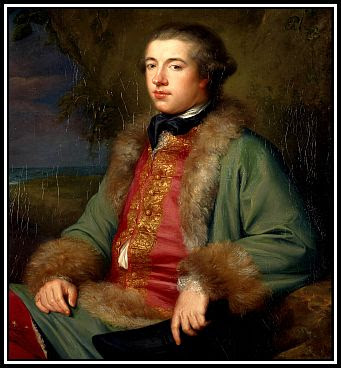 "I found him alone, in a reclining posture in his drawing room. He was lean, ghastly, and of an earthy appearance. He was quite different from the plump figure which he used to present. He seemed to be placid, even cheerful. He said he was just approaching to his end." (Image: David Hume, 1766, by Allan Ramsay) 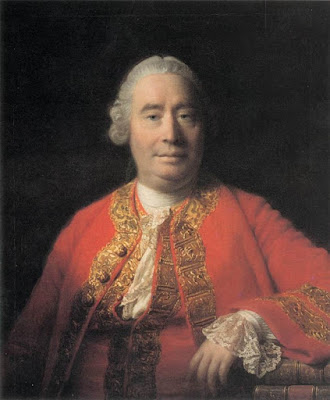 Boswell, a conventional Christian with a robust libido, hoped to get Hume to confess his faith. Hume replied that he had long ago rejected belief in any religion, and that "the morality of every religion was bad." He went on to say that "when he heard that a man was religious, he concluded that he was a rascal, though he had known some instances of very good men who were religious."

Boswell asked Hume if he persisted in rejecting belief in an afterlife, with death staring him in the face. Hume answered, "it was a most unreasonable fancy that we should exist forever." Boswell left him "with impressions that disturbed me for some time."

Hume died in his home on St Andrews Square, New Town, on August 25, 1776. He was buried at his request in a tomb on nearby Calton Hill. He wished it to be inscribed with only his name and dates.

The tomb, designed by his friend the architect Robert Adam, sits next to a statue of Abraham Lincoln, memorializing the sacrifices of Scottish soldiers who fought for the Union in the American Civil War. 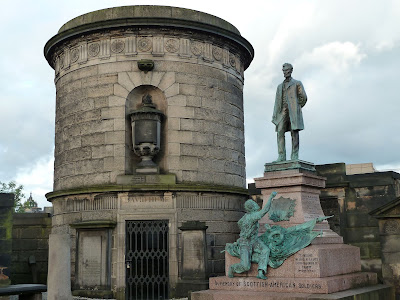 Atheist or not, Hume is today a celebrated figure in Scotland and globally. Since 1995, a statue of Hume in classical garb has resided on the Royal Mile, across from St. Giles Cathedral. I suspect he would have appreciated the irony of that.
It has become a custom for visitors to rub his big toe on the right foot for good luck, which is why the original bronze shows through. That is also ironical, because Hume of course rejected belief in luck as ignorant superstition. I touched the toe myself, however, just in case. 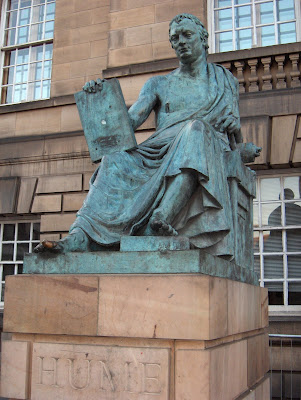 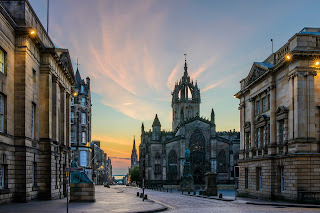