Last year, Chinese officials and many others accused Donald Trump of racism because he referred to Covid-19, or coronavirus, the "Chinese virus." At his Tulsa rally, he called it "Kung Flu."  "Trump Virus" may be the most accurate name, because he has done more than anyone on the planet to spread it. His rhetoric has also contributed to an upsurge on attacks on Asian Americans.

Racist or not, and it often is, naming pandemic diseases after their alleged place of origin is an old practice. In 1957 and 1968, two deadly flu pandemics were named the "Asian Flu" and the "Hong Kong Flu." A pandemic flu first reported in St. Petersburg in 1889 was denoted the "Russian Flu." It was later called "Asiatic Flu," although St. Petersburg is a long way from Asia.

When pandemic cholera first made its way from India to the UK in the early 19th century, people called it the "Indian Cholera," as in the broadsheet below from 1831. One reason for adding the adjective "Indian" was to distinguish this new, mysterious disease from an old, familiar one: "cholera infantum," a type of childhood diarrhea. but the name led to Indians being blamed for the disease. 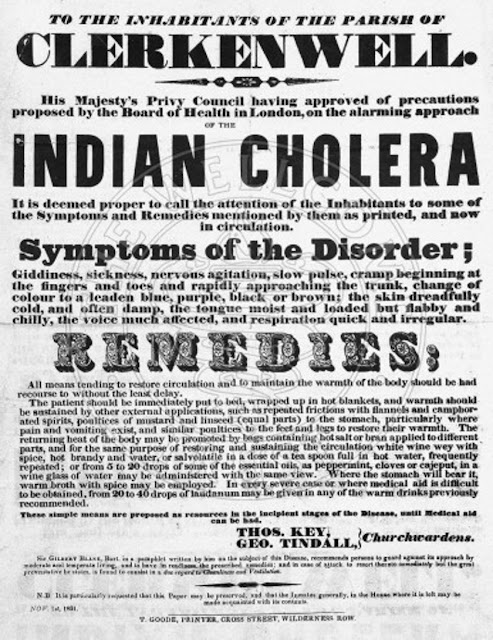 In the cartoon below, also from 1832, the cholera is dressed in Indian garb, trying to enter England, but caught by stout John Bull. The reality was far different for England and the world. A series of cholera pandemics during the 19th and early 20th century killed millions in Asia, Africa, Europe and North America, more than 30 million in India alone. 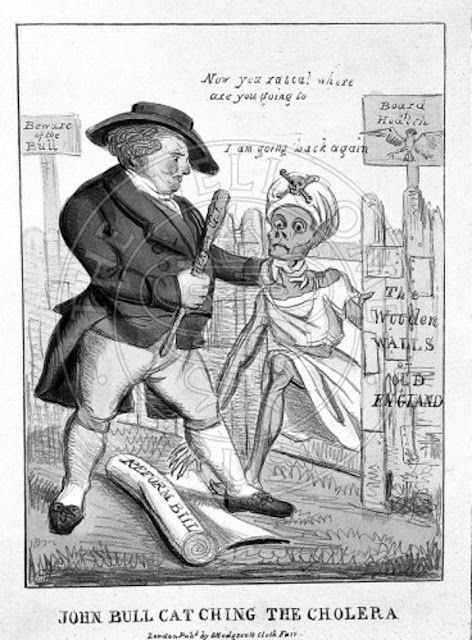 Later in the 19th century, cholera was often referred to as "Asiatic Cholera." 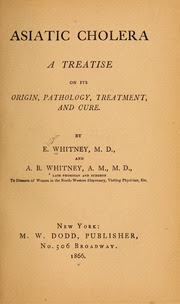 In 1918-1919, a virulent form of influenza became pandemic, and ultimately killed 50-100 million people worldwide. It quickly became known as the "Spanish Flu," although it probably originated in the USA. But the USA was engaged in World War I and sending thousands of troops to Europe. The press was instructed not to report about the epidemic, lest it lead to demands to stop troop shipments -- the overcrowded ships were excellent incubators for such a disease.

Most European countries involved in the war similarly kept quiet at first, to avoid hurting morale. Spain, however, was neutral, and its press reported on the outbreak. Spain's reward was to have one of the worst pandemics in history named after it.

It was also called "Flanders Grippe" in Britain, "Bolshevik Disease" in Poland, "Too much inside sickness" in Hong Kong.

Today, it is usually called the "Great Influenza." Perhaps it should be called the "American Flu." 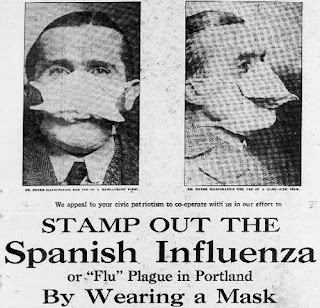 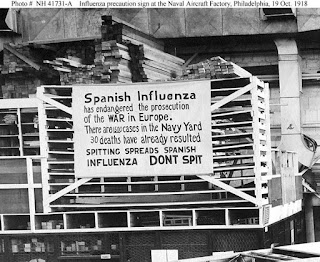 Interestingly, the greatest and most famous pandemic in world history was not named for a place or nation. That was the pandemic of plague that ravaged Eurasia during the 1340s, killing between 75 and 200 million, It wiped out perhaps as much as 60 percent of the European population. It probably originated in Central or East Asia and traveled west along the Silk Road to the Middle East, Europe, and North Africa.

The 14th century pandemic is best known today as the Black Death, but that name was not applied to it at the time. Other names for it include, Plague, Great Plague, Black Plague, and Pestilence (La Peste). Before the pandemic, plague and pestilence simply meant a deadly epidemic disease. (Below: The Dance of Death, or Danse Macabre, late medieval, Nuremberg Chronicles). 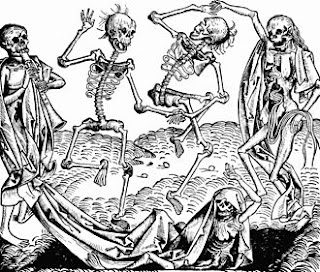 Posted by peter mccandless at 23:55