The Anti-Fascist Cartoons of David Low

David Low (1891-1963) was one of the great political cartoonists of the 20th century.David Low, Cartoonist Born in New Zealand, he emigrated to Britain in 1919. In 1927 he joined the staff of London's Evening Standard. He took the job on condition the paper's owner assured him he would have complete freedom from editorial interference.

Low remained at the Evening Standard until 1950. He is perhaps best remembered for his cartoons of the 1930s and early 40s. lampooning the dictators Hitler, Stalin, and Mussolini, and British architects of appeasement, Neville Chamberlain and Lord Halifax.

In 1937, Nazi Propaganda Minister Joseph Goebbels told Halifax that Low's cartoons were damaging German-British relations. Halifax promised to try and restrain Low, with little effect as it turned out. Indeed, Halifax himself became one of the chief targets of Low's satire.

In the first cartoon, from July 1936, Low draws Hitler advancing towards his goals of expanding German military power and territory by walking along the backs of the "spineless leaders of democracy" who are nothing more than "Stepping Stones to Glory."

Hitler had already violated key terms of the Treaty of Versailles (1919). After gaining power in 1933, he massively expanded the size of the German military, violating the clause restricting its size and weaponry. In 1936, he ordered German soldiers to occupy the Rhineland on the French border, which the Treaty had declared a demilitarized zone. The other powers did nothing. 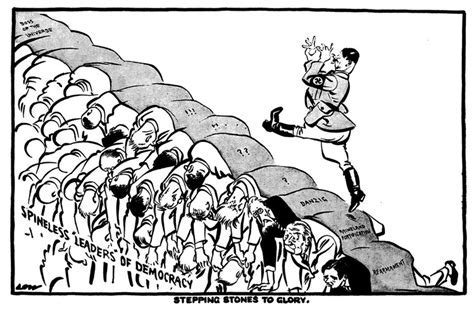 Lack of spine remained a theme in another cartoon, which blasts the appeasement policy of British Foreign Secretary Lord Halifax. The policy veered between conceding the "legitimate" demands of Hitler and Mussolini and warning them not to demand more or resort to military action.

Here, Halifax, in bed under piles of foreign office dispatches, is approached by his butler carrying breakfast and newspapers. The butler's question and the items in the wardrobe make Low's point. 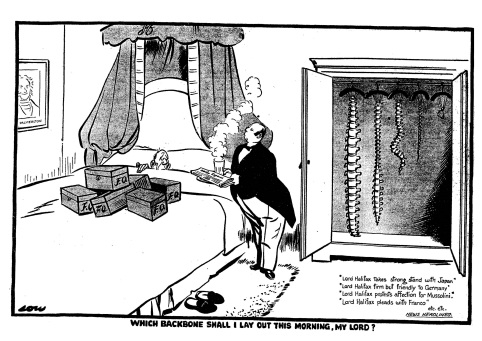 In "Cause Precedes Effect," below, European leaders, including Mussolini in black cap. give Hitler the Nazi salute while parading with his army. The Versailles Treaty, key clauses of which Hitler had violated, is carried in front, along with a banner. The caption, "17 Years of Lost Opportunity" refers to the leaders' failure to act decisively to preserve the Treaty's promises of democracy and world peace. 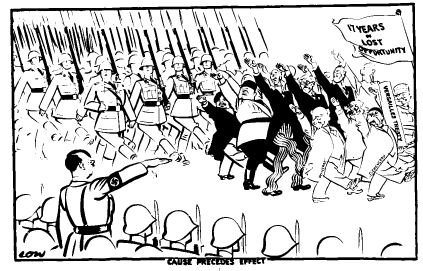 In March 1938 Germany annexed Austria and the other powers did nothing, reasoning that Austrians were Germans. In September 1938, after threatening war, British and French leaders met with Hitler and Mussolini in Munich. With Chamberlain pushing the French, they agreed to Hitler's demand that Germany be allowed to annex the Sudetenland of Czechoslovakia. The Sudeten region had a German majority and Hitler claimed that the Czechs were oppressing them.

In return, Hitler promised to make no more territorial demands in Europe. The British Prime Minister, Neville Chamberlain, arrived  back in London waving the agreement, and saying he had brought "Peace in Our Time." Low mocked the Munich Agreement by implying that it amounted to destroying a strong defensive wall and replacing it with Hitler's worthless paper promise. Chamberlain and Halifax are at left holding the rope which Conservative sheep are jumping over. 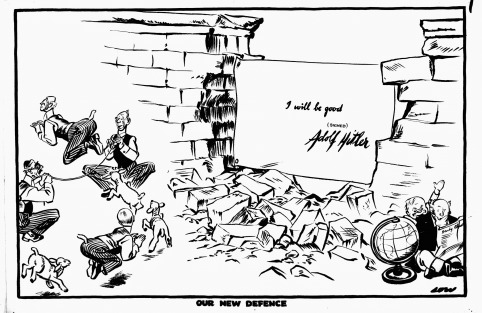 How worthless Hitler's promise was became clear within a few months. The Nazis occupied the rest of Czechoslovakia and began making territorial demands on Poland. Low predicted as much at the end of 1938 when he portrayed Hitler as Kris Kringle collecting European nations, pictured as children of the "French-British Family," as presents for Germany. 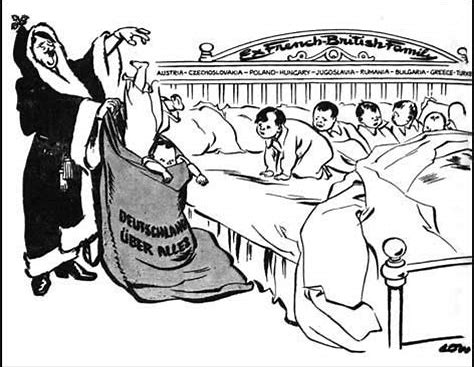 Shortly before invading Poland, Hitler negotiated a non-aggression pact with the Soviet Union. The Nazi-Soviet Pact took many observers by surprise. In Mein Kampf Hitler had denounced "Jewish Bolshevism" as one of the greatest threats to the "Ayran Race" and threatened to invade and destroy the Soviet Union.

Hitler only agreed to the pact because his generals feared getting stuck in a two front war as in the Great War of 1914-18. Stalin, who had tried and failed to form an anti-fascist alliance with the Western Powers, agreed to the pact in return for being allowed to annex eastern Poland and the Baltic States.

Here, Low portrays Hitler and Stalin meeting each other in Poland, with a dead Polish soldier lying between them. Their greetings to each other indicate the underlying animosity between the two dictators. 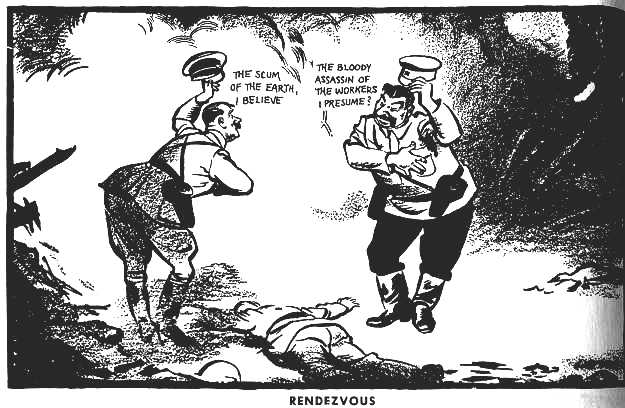 Indeed, Low was convinced that the Nazi-Soviet partnership could not last. In "Someone is Taking Someone for a Walk" he predicts, correctly, that they were insincere in their new friendship and would soon be enemies again. 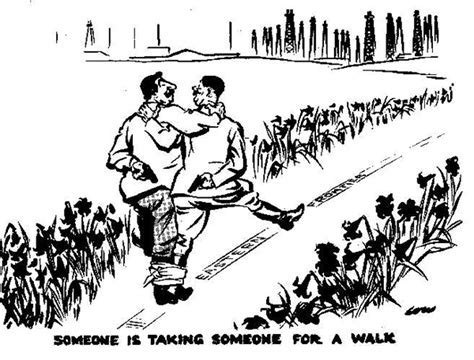 In May 1940, Hitler invaded France and the Low Countries sweeping aside the French and British armies.Within a few weeks, France had surrendered. Several hundred thousand British and French soldiers escaped to Britain in what became known as the "Miracle of Dunkirk." But there was no hiding the fact that Nazi Germany had achieved a tremendous victory. Most of Continental Europe was soon under his control or allied with him.

As the scope of the disaster in France became clear, Chamberlain's Conservative government fell and a National Government led by Winston Churchill replaced it. Churchill was also a Conserative, but the new government was a coalition of Conservative, Labour, and Liberal MPs.

Low cheered the creation of the new government with the cartoon, "We're Behind You Winston," emphasizing national unity in face of the fascist threat. Churchill leads, followed by leaders of the three major parties. Chamberlain and Halifax, first and third behind Churchill on the left, remained in the war cabinet for the time being, and Halifax in particular pushed for a negotiated peace. Chamberlain was soon removed by death from cancer. In 1941, Halifax was packed off to Washington as British ambassador. 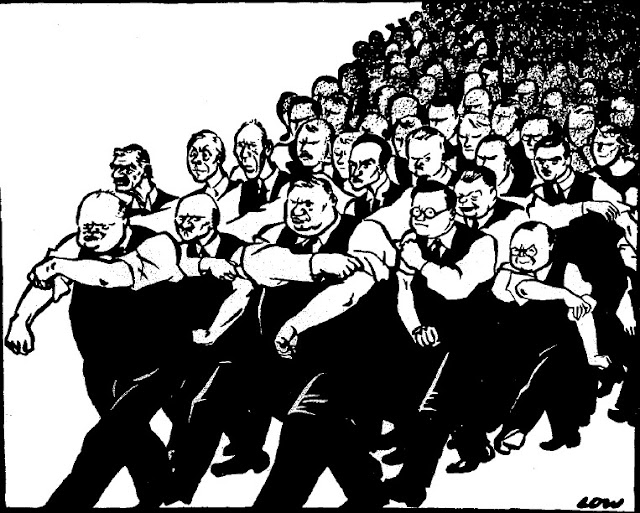 With the fall of France, Britain  found itself with no allies in Europe, facing not only Germany but Fascist Italy. Mussolini, who had formed a pact with Germany in 1936, joined Hitler in the war as soon as it became clear France was finished.

Low illustrated Britain's dire situation in "Very Well, Alone," with a British soldier on a rock surrounded by stormy seas, vowing defiance. Britain would remain alone for a year, until Hitler betrayed Stalin and invaded the Soviet Union in June 1941. A few months later, the Japanese attack on Pearl Harbor brought the USA into the war, which would last another four years. 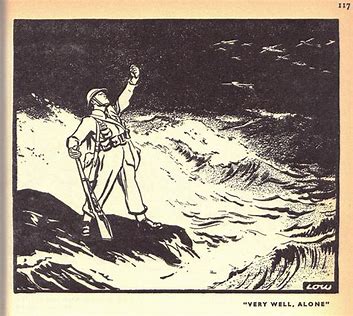 Many more of Low's cartoons can be found on various online sites.

Posted by peter mccandless at 09:54