The Wicked Wit of Winston Churchill; or Somebody Else 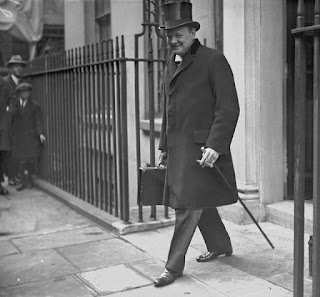 Winston Churchill was famous, often infamous, for his biting, pithy wit. Historians and biographers may disagree as to exactly what he said to whom, or even if he said or originated certain lines attributed to him. There is little doubt, however, that he had a way -- often his way -- with words.

The recipients, or alleged recipients, of his wit were often his fellow politicians and fellow upper class folks. But they included all sectors of society. Even the voters, of whom he said (perhaps), "The best argument against democracy is a five minute conversation with the average voter."

That line jars uneasily (or does it?) with another of his famous statements about democracy, that it was "the worst form of government except for all those others that have been tried." But did he really say that? Inquiring minds disagree.

One of his most famous quotations was directed against a woman he disliked, Tory MP Lady Nancy Astor. She had said to him at a social gathering, "Winston, if you were my husband, I would put poison in your coffee." He reputedly replied, "My dear, if you were my wife, I would drink it." Did he really say that? Churchill biographer and Foreign Secretary Boris Johnson says no. But Johnson also said that Brexit would provide an extra £350 million a week for the NHS. (below: Lady Astor) 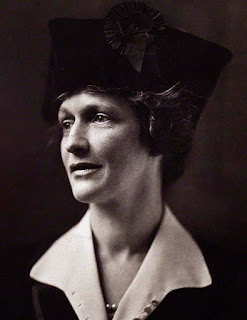 Deserved or not, Churchill had a reputation for indulging in large quantities of strong drink. One day in 1946, when he was leaving Parliament, he was accosted by Lady Astor or Labour MP Bessie Braddock (depending on which version you read). The woman in question accused him of being disgustingly drunk. "Yes," he shot back, "but you are ugly, and I shall be sober in the morning." (Below: Bessie Braddock)

He once explained his relationship with liquor as follows: "I have taken more out of alcohol than alcohol has taken out of me."

If the date of the ugly-sober quip, 1946, is correct, Churchill had reason to be in a foul mood. The previous year, the voters had kicked him out of office after he had led the country through World War II, by giving the Labour Party the reins of government.

His replacement as Prime Minister, was Clement Attlee. Churchill famously called Attlee "a modest man, who has lots to be modest about." Did Churchill also originate the lines, "an empty car drove up, and Clement Attlee got out," and "He is a sheep in sheep's clothing."? Well.... (Below: Attlee) 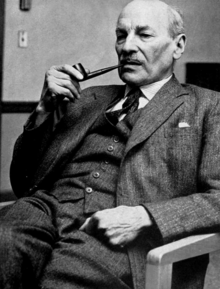 The following story of an exchange between Churchill and Attlee is almost surely apocryphal, but sounds like something Winnie might well have said at the time. It was during the late 1940's, when Labour was nationalizing many large industries.

One day, Churchill walked into the gents' toilet at the House of Commons to find Attlee already busy at one of the urinals. Churchill grunted and walked to the urinal farthest away from Attlee. "Winston," Attlee remarked, "why are you being so unsociable?" "Clement," Churchill replied, "I'm not being unsociable. It's just that every time you see some thing big, you want to nationalize it."

Churchill was hardly kinder to his Conservative colleague and former boss, Stanley Baldwin, Prime Minister for much of the 1920's and 30's. Once friends, during the 30's they fell out and Baldwin removed Churchill from the cabinet. When someone asked Churchill why he hadn't sent Baldwin a card on his 80th birthday, he allegedly retorted, "I wish Stanley no ill, but it would have been much better if he had never lived." That's believable enough. (Baldwin, below, died a few months later.) 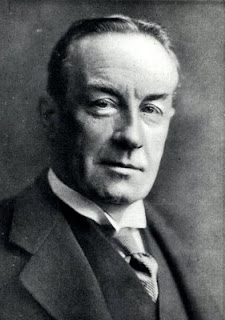 Churchill often criticized himself, but could combine self-criticism with arrogance in a humorous way, as the following: "I have often had to eat my own words, but I must confess I have always found it a wholesome diet."

Churchill wrote a lot of history and it was generally complimentary, to him. But he warned us about it, humorously, of course: "History will be kind to me, because I intend to write it."

I think that is accurate.

Posted by peter mccandless at 13:50