Of Mice and Men and Covid 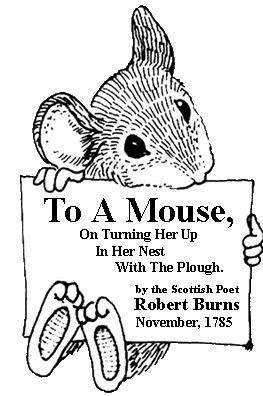 "The best-laid schemes o' mice and men gang aft agley." This line from Robert Burns' "To a Mouse," published in 1786, has become internationally famous. (Image: Burns by Alexander Nasmyth, 1828) 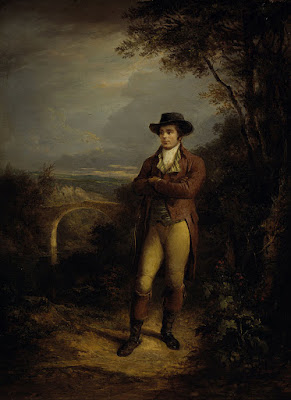 Burns wrote "To a Mouse" like many of his poems, in a Scots dialect many people can't follow without a bit of translation. The relevant line from the poem is usually rendered into "standard" English as "The best-laid plans of mice and men oft go awry."

The line got a major boost from the success of John Steinbeck's Depression Era novel Of Mice and Men. Steinbeck projects Burns' theme onto the lives of George and Lennie, two down-and-out farm laborers seeking jobs and a better life. Their plans of buying a little farm with rabbits and settling down "gang agley" in a tragic denouement. 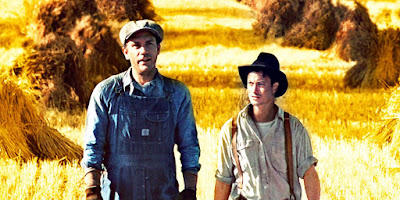 In the past year most of us have learned to appreciate Burns' rumination on the fates of mice and men as never before. The raging Covid-19 pandemic may be likened to the destructive force of Burns' plough.

In the poem Burns, who was a working farmer in his native Ayrshire, apologizes to the mouse. His plough has destroyed the "wee beasties'" home. However humble, the mouse had labored hard to make his house secure and planned to winter there.

In addressing the mouse Burns sounds much like a modern environmentalist. He stresses the interconnectedness of humans and the natural world:

An' justifies that ill opinion

At me, thy poor, earth-born companion

Burns goes on to compare the mouse's predicament to his own. He was in financial difficulties at the time, and also reaping the consequences of his relentless womanizing.

Still thou are blest, compared wi' me!

The present only toucheth thee:

But Och! I backward cast my e'e

An' forward, tho' I cannot see,

I guess an' fear!

Since the early months of 2020, many of us have had our plans ripped apart by the Covid Plough. Holidays abroad, business trips,  and visits to families and friends were churned up and away.

We had planned a holiday to Portugal in late March 2020, only to have it cancelled by the first lockdown a few days before our scheduled departure. Other trips we had been thinking about taking were put on hold, and still are. Since the first lockdown we haven't traveled more than a few miles from home. We hadn't planned for that.

The disruptions to our plans pale by comparison to those the pandemic has inflicted on many others. Weddings and other ceremonies had to be postponed or greatly altered, moves cancelled, schools closed. Jobs and businesses that seemed secure disappeared. Incomes for billions of people shrank while billionaires raked in huge profits. Mr. Bezos, Can you spare us a dime?

As unpleasant as all these disruptions have been, they pale in comparison to the massive loss of life and pain Covid-19 has produced. How bad it will ultimately prove to be we can only wonder. This pandemic shows no sign of abating yet.

Meanwhile, tour companies are advertising great trips for 2022 and 2023. My first to this reaction is: You cannot be serious! On reflection, I remind myself, life must go on. We need to dream, to have something to look forward to, to plan ahead for good or ill. But we can be forgiven if we sometimes feel like the mouse with Burns' plough bearing down.

PS. Burns was looking for new opportunities around the time he wrote "To a Mouse." One of the jobs he almost took was that of overseer on a Jamaican sugar plantation, which sits in stark contrast to the anti-slavery and egalitarian themes of many of his later poems.

While preparing for the voyage to the West Indies, he sent his poems to a publisher in Kilmarnock, and the volume was published to great success. It is known today as the "Kilmarnock Edition." (Image: Title page to Poems, Chiefly in the Scottish Dialect by Robert Burns.) 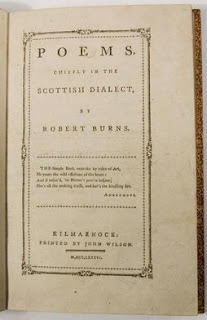 The success of the book led Burns to abandon the Jamaican plan. He decided to stay in Scotland, left his Ayrshire farm to his brother, and headed for the bright lights of Edinburgh.

There he would find further success and wide acclaim in the clubs and salons of the Scottish capital. In time, however, he soured on genteel society. He alienated many friends and influential men through his outspoken support for the American and French Revolutions and for political reform in Britain.

Burns returned to his native Ayrshire and became an excise officer. He died in 1796, possibly from rheumatic heart disease aggravated by hard work. He was only 37. (Image: Burns by Alexander Nasmyth, 1787) 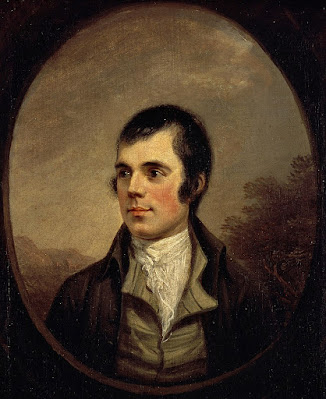 Posted by peter mccandless at 22:31