Covid-19 should be renamed Proteus.

WHO has just announced it will rename all the variants after letters of the Greek alphabet, alpha, beta, gamma, delta, etc.

In light of this may I suggest that we rename Covid-19 in all its now and future variants the Proteus Virus, after the Greek deity of that name.

Proteus was a water god of ancient Greek mythology who could shift shape at will. In The Odyssey, Homer called him  "The Old Man of the Sea." Proteus was subject to the Sea God Poseidon (Neptune for Romans), for whom he tended flocks of seals.

In some Protean myths, Proteus has the gift of prophecy. He can foretell the future but will do only to those capable of capturing him, or pinning him down, so to speak. His shape-shifting is his means of avoiding capture.

In The Odyssey, Proteus takes the shape of a lion, a snake, a leopard, a boar, water, and a tree in order to avoid capture by King Menelaus. The King captures him, however, and forces him to reveal his secrets.

There's some good news here. Proteus was seized and provided the needed information. (Unlike Trump and Boris, Proteus had to tell the truth.) We can hope that the scientists will be able to extract from the Covid-19 virus the knowledge required to keep it under control.

We already have a genus of bacteria named Proteus. The Proteobacteria are opportunistic human pathogens, taking advantage of weakened immune systems to cause infections, especially urinary tract infections.

So, why not a Proteus Virus? We could name each variant after a shape Proteus assumed: Lion, Leopard, Snake, etc. Sounds a bit grisly, I know, but we name big storms after people. 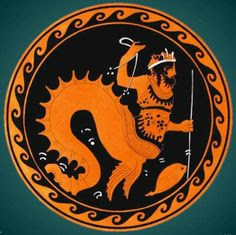 Posted by peter mccandless at 18:56