London's Soho neighbourhood has long been known as a place where bodies are for sale. Living bodies. Less well known is its connection to the sale of the dead. If you walk along Shaftesbury Ave. to the Lyric Theatre, and turn onto Great Windmill Street, you will find this plaque on the side wall of the theatre. 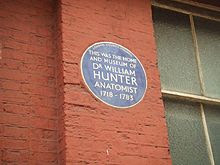 William Hunter (1718-83), who lived and worked here, was one of the most renowned (and often reviled) anatomists of the 18th century. 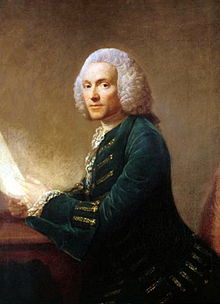 Like all anatomists of the time, Hunter needed dead bodies, for himself and his students. The number of legally available bodies, then restricted mainly to persons executed for murder, fell far short of the growing need.

For Hunter, the difficulty was compounded by the fact that much of his "cutting edge" research was in obstetrics. His most famous work, The Anatomy of the Human Gravid Uterus (1774) required the dissection of a large number of recently deceased pregnant women. 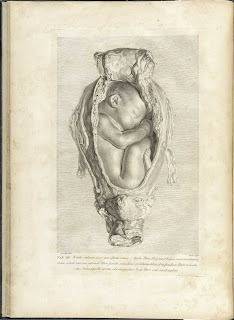 Few if any of these bodies could have been obtained through legal channels. Executed murderers were the main legal source, but they were not numerous and pregnant women were rarely executed.

Most anatomical subjects were "snatched," often from recent burials, sometimes before burial. Below, an anatomist, probably Hunter, is shown fleeing after being discovered with a woman's body. Recently, historian Don Shelton argued that some of the women whose bodies Hunter acquired must have been murdered. Others disagree. 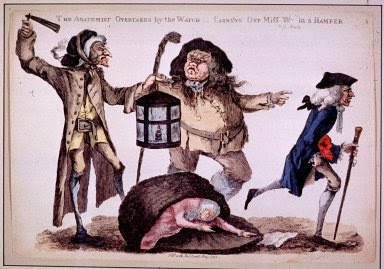 Anatomists and their students sometimes did the snatching, but gangs of "resurrectionists" or "sack 'em up men" increasingly took over during the late 18th century. Whether any of Hunter's subjects were murdered is questionable, but the possibility cannot be ruled out.

Hunter's anatomy school in Great Windmill Street was a mecca for aspiring surgeons and physicians. A certificate of attendance at his courses was highly valued. 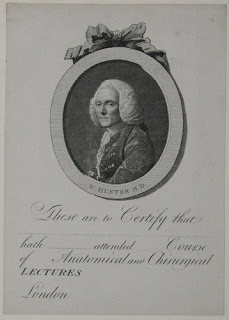 Artists were also highly interested in Hunter's work. His friends included famous painters and sculptors. In the painting below, Hunter is shown at the Royal Academy of Arts, next to Joshua Reynolds (with ear trumpet). 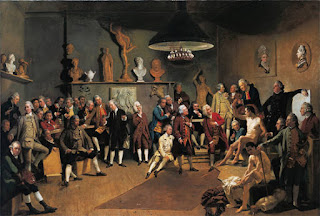 Hunter's work and the source of his research material aroused much suspicion and derision. Cartoonists of the day sometimes made him their subject. The top one here shows Hunter with the mangled bodies of subjects. The bottom image, by Thomas Rowlandson, shows a scene at Hunter's school. A man, possibly Hunter, is looking at a list of prices for bodies, male, female, and infant. 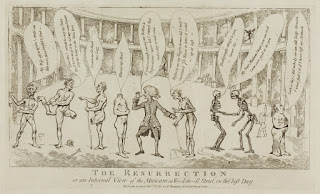 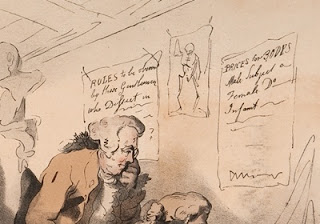